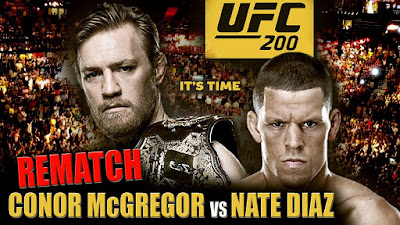 UFC® 202: Diaz vs. McGREGOR 2
FIGHTER PREDICTIONS
London, UK – On Saturday August 20, one of the most highly anticipated rematches in UFC history will take place, as Nate Diaz and Conor McGregor go head to head once again. The mercurial McGregor was stopped in his tracks by Diaz at UFC 196 back in March 2016 and, ever since, the Irishman has been plotting his revenge.

Tether’s Response to Baseless Complai…
6 Health-Boosting Superfoods You Shou…
Why is it so much harder when you hav…
River in the autumn forest sound
Idle Heroes Tier List – September 201…
Ahead of UFC 202®: DIAZ vs. McGREGOR 2, which takes place at the T-Mobile Arena in Las Vegas, fighters from across the UFC’s roster have offered their thoughts on the unmissable match up.
------
“Conor is a game-changer, Conor is on top of his game and Conor is going to win the rematch. No disrespect to Diaz, but Conor will win.”
Michael Bisping, UFC middleweight champion
“I think Nate’s going to do the same thing he did to Conor the first time. Conor tripped over his shoe laces the first time around and I think he’s going to trip up again. Conor’s a good talker but he has to be a good talker because he’s not too damn good at fighting.’
Eddie Alvarez, UFC lightweight champion
“From what I saw, Nate is way bigger, stronger and he’s training. He got the first fight on short notice and was still able to win. Well-trained, he’ll be really hard for McGregor. If you look at Diaz’s fights, even when he’s getting beat he finds a way to come back. If I had to bet, it would be Nate.”
Jose Aldo, interim UFC featherweight champion
“I expect Conor to try and pace himself early on - not without pressure, but without the heavy focus on landing his powerful left hand. I think his attack will be more varied, and I think we will see a lot more of his kicking game. For Diaz, he will start steady and try to counter McGregor's attack. If Conor is commanding the centre, look for Nate to try and back him up with boxing pressure. The Diaz game plan is to pressure you until either you break and fall to the floor, or you shoot. I doubt it will change for this fight. It wouldn't surprise me if we saw McGregor take Diaz to the floor towards the end of a round though, just to prove the point that he isn't intimidated by Nate's Jiu Jitsu skills.”
Dan Hardy, UFC welterweight and commentator
“I think Conor has learned a lot since the last fight but Diaz is too big. Conor is one of the best guys in the world in his division but it’s hard to move up and compete against the best guys in another weight class.”
Alex Gustafsson, #3 UFC light heavyweight
“I think if Conor takes his time and breaks him down, does what he does best, uses his speed a little better and maybe not concentrate on power as much, I think he will walk through Diaz.”
Gunnar Nelson, #11 UFC welterweight
“I see Nate winning again. Nate can take punches and he’s got good stamina which is going to put a lot of pressure on Conor McGregor.”
Junior Dos Santos, #4 UFC heavyweight
“When you’re used to winning all the time, it can sometimes be hard to get super motivated for a fight. Conor has a point to prove now and I can see him being a lot grittier in the rematch. I’m backing him to beat Diaz.”
Brad Pickett, UFC bantamweight
“Diaz all day! I don’t think Conor wants this fight as much as he says he does and I think Nate Stockton Slaps his way to a win.”
Michael Chiesa, #9 UFC lightweight
“Diaz is going to win. I can’t see McGregor lasting all five rounds; Diaz can last all day.”
Derrick Lewis, #11 UFC heavyweight
“I think Conor will be smarter than he was in the first fight and he has the ability to pick off Diaz in a five round fight. Conor will be fitter and sharper this time, but I think Diaz will get the finish in the 4th or 5th round. The outcome will be the same, it will just go on a few rounds longer.”
Tom Breese, UFC welterweight
“I think Diaz wins this fight again. The last fight was a really good fight but I think this one will go the same way.”
Jan Blachowicz, UFC light heavyweight
“I think the fight will go the same way as the first one did. The opening exchanges will be different though. Conor is more focused and is a lot more switched on for the fight with regards to the training he has been doing. The outcome will be the same though. Diaz to win by ground and pound submission in the third round; it’s his biggest asset.”
Ross Pearson, UFC welterweight/lightweight