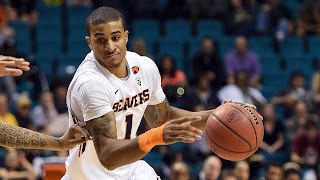 In any basketball league, if a player is blessed enough to have a son who will inherit his father's undying passion towards the game of basketball, chances are that boy is already destined to make a loud noise when he steps into the big league and we have seen it happen in the PBA. For starters, we have Kiefer Ravena, the famous son of Bong Ravena. We also have the Teng Brothers of Jeric and Jeron, sons of known PBA defensive specialist, Alvin Teng. Internationally, we also have Kobe Paras, the son of the only Rookie MVP, so far in the history of the PBA, Benjie Paras.
While having a basketball-famous name can be beneficial, it's not always the case, especially in the NBA. Take a look at the case of Gary Payton II, son of 1-time NBA champion and Hall of Famer, Gary Payton. Payton II wasn't selected by any team during the 2016 Draft and only got a deal with the Houston Rockets after the latter decided to sign Payton II as a free agent. He then played a grand total of 18 games over the course of the last two seasons with the Milwaukee Bucks before the Bucks released him last December.
Ever since Payton II was released, several teams were rumored to be interested in acquiring him and among those teams is none other than the Los Angeles Lakers, one of the teams which his legendary father has played for during his decorated career. And now, the word has it that the Lakers are set to sign Gary Payton II in a two-way contract which means he will be playing extended minutes for both the Lakers and their G-League affiliate, South Bay.
This could be a welcome development for the Lakers who are riding on their 4-game winning despite missing Lonzo Ball due to soreness in his left knee and is currently listed as questionable for their next game.

MJ Unpacked Returns To Las Vegas For …
FREDDIE GIBBS UNVEILS INTROSPECTIVE N…
Historic Investment in Partnerships f…
Sunday Soul Session Mix
Man United's American suitors Apollo …
With their prized and hyped rookie questionable, the Lakers are hoping that the arrival of Gary Payton II will provide a more balanced attack from the point guard position because signing someone like Gary Payton II means that the Lakers want more point guards to back-up Lonzo Ball aside from Tyler Ennis and Alex Caruso.
Question: Is this a great deal for the Lakers? It will be seen once Payton II hits the floor for the Purple and Gold.