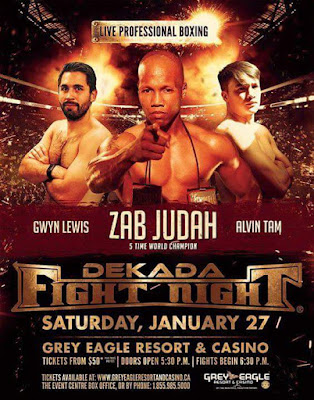 Calgary, Canada at the Grey Eagle Resort and Casino the former two-division champion Zab Judah is continuing his boxing career as he takes on an unknown opponent, Noel Mejia Rincon in a 10 rounder professional boxing match that may prove nothing.

Globe announces “People’s Champ” Mann…
20 Best Free Sports Streaming Sites O…
Latest Cryptocurrency News and Update…
Ayesem – Time Up ft. Eye Judah
The Best Place to Throw Sharp Objects
Zab Judah at 40 years old had some great boxing battles that include winning the world junior welterweight and the welterweight belts. His encounter with Tsyu, Mayweather, Spinks, Mathysse, Cotto were some of the most memorable fights.
The fight in Canada would not have the best card but if you are a fan of boxing, you should in Canada you should take advantage of the opportunity to see the former champ whoop the ass of his opponent.
Full fight card here: http://boxrec.com/en/event/761970

10 Best Things to Buy Before and After Christmas