Gordon Hayward Out Of the Walking Boot 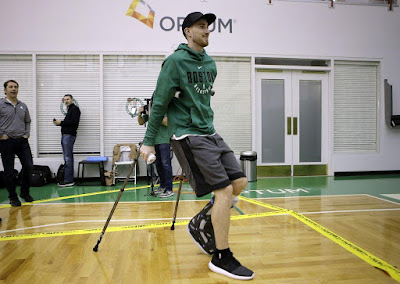 Gordon Hayward played one game with the Celtics and got a horrific injury that put him sidelined and scared the Celtic Fans.  After the surgery, Hayward is graciously recovering and was deemed out of the season. However, his wife recently posted a photo on Twitter that may mean that he may be able to recover faster in time for the playoffs or maybe an Eastern Conference Finals matchup against the heavily favored Cleveland Cavaliers.

Gordon Hayward is from the walking booth as he plays with his daughter.
Hayward was supposedly one of the primary players for Celtics championship run but his absence looks to have been a blessing in disguise especially for young players like Jaylen Brown and Rookie Jayson Tatum who have been playing extremely well at their young age.
div id="rNA1341">
Paul Pierce and Tracy McGrady, both legends of the game discusses scenario of Gordon Hayward's recovery and timeline for return and it seems like that two have different views on the matter.  Paul Pierce does not want to gamble on Hayward while McGrady would let him play especially in the Eastern Conference finals.
What do you think is the right move assuming Hayward is ready to play?