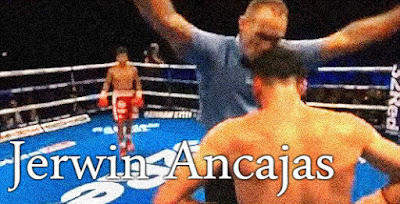 There is no need for Jamie Conlan to continue to get punished by the obviously quicker and better Jerwin Ancajas as the referee stopped the fight after seeing six rounds of domination from the Filipino.

In round six, Ancajas unleased a glancing right hook that landed on the side of the head of Conlan and dropped him for good.
Start of round 1, Irish fans chants in support for homeboy Conlan as the previously undefeated fighter gets a boost from the home crowd in Belfast, Ireland.  But at 1:19 of the round, to the surprise of the crowd, Jamie Conlan, suddenly took a knee in a delayed reaction to a punch that basically previewed what will happen in the fight.  Jerwin lands combination early, brave Conlan stays in there and exchanges.

Round 2, Ancajas continues to box with Conlan, utilizing jabs to initiate action. Conlan had his left eye bloodied as Ancajas piled up some punches and created more steam behind the loads of combination punches that he is unleashing. It was all Ancajas in the second round.
Round3,  Conlan got a small window of success with his counter but not enough as two fighters seemed to relax a bit in the early minutes of round 3. The last minute of the round is where Ancajas suddenly put the pedal to the metal as he was tearing shots after shots, including body shots that crumbled Conlan to the ground. Conlan stood up but Ancajas returned back to work right away and poured in another set of body shots until the bell rang. Conlan Survived round 3.
Round 4, Ancajas continued to be aggressive yet methodical with his combinations as he slowly chopped Conlan to the face and the body. Conlan looked as if he is ready to give up as Ancajas relentlessly pressured Conlan until the end of the round. Round four was punctuated with a left straight to the face to Conlan that put this Irish down again for the 3rd time of the fight.

Round 5. At this stage, Jerwin has gained a lot of confidence as he continued the dominance while Conlan seemed to look unsure and is still finding the right formula to move Ancajas who seemed unaffected with punches thrown by Conlan. Irish crowd continues to support their man all throughout the fight. In this round, Jerwin Ancajas was deducted one point for a low blow.
Round 6. Jerwin continuous his relentless assaults with head combinations that drop Conlan again for the last time. Although Conlan gingerly got up, the referee stepped in and declared the fight over. It was total domination by the champ and the referee made the decision to finally halt the fight.
Still the IBF Super flyweight champion of the world  Jerwin Pretty Boy Ancajas.
Jerwin now improves his record to 28 W, 1 L, 1 D.
Right after the fight, Jerwin thanked everyone on social media.
Maraming salamat po una kay god na nag bigay ng lakas at panalo sa laban ko at sa mga tao pong nag dasal sa laban maraming2 salamat po..
#SALAMAT
#TEAMANCAJAS
Watch the full Fight of Jerwin Ancajas vs Jamie Conlan in Belfast.