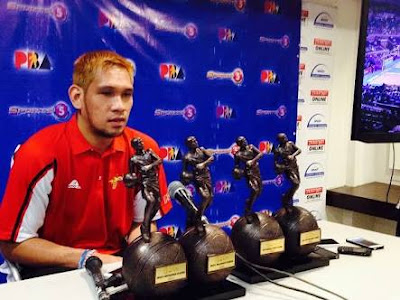 Every year, more and more players are added to the league, rookies are explosive and veterans’ improvement are seemingly infinite. With this ever widening pool of Potential athletes in the Philippine Basketball Association, let us try to narrow down and predict the possible MVP Awardees so here we go.

Greg Slaughter is by far Fajardo’s biggest foe in the shaded area. Slaughter has the strength, skill and of course the size to go head-to-head against Fajardo and thus give him a hard time from scoring easy baskets underneath.

If the trade rumor is real, then Terrence Romeo will have the chance to be deployed with a stronger team that may get to the finals or even give him his 1st championship. Romeo always is an MVP material but it’s the Batang Pier’s lack of success that’s holding him back to reach this ever delighted achievement.

A pointguard who shines with rebounds? It is kinda extraordinary. Scottie Thompson does not just get the arbitrarty rebounds but also significant offensive and defensive boards for his team and not just that, he can penetrate, shoot from the outside and dish out assists. Scottie is a full-package player.

Who does not know the Leethal Weapon? A crossover artist. The league only has a few numbers which can handle the ball well and perform ankle breaking crossovers. Such players are of course Paul Lee, Terrence Romeo and Stanley Pringle. With the possession of this considered to be extraordinary talent, Paul Lee is a very dangerous guard who can drive pass or drag you down with his killer crossovers for easy plays.

If there’s a hustle man for the Meralco Bolts, then it is nobody but Cliff Hodge. With extra efforts in rebounding, Hodge always provides the Bolts with an extra push towards victory.
These 5 exceptional athletes are all potential MVP’s but the possibilities aren’t limited to these guys. Who knows what awaits all of us this coming season? We are all here to watch whatever action they’ll give. It’s just great to watch every game while keeping an eye on some potentials and continuously evaluating their performance.