Hugnatan Hits 6 Threes, Durham has 28 to Force a Game 7

Meralco led all game along and held on in the 4th 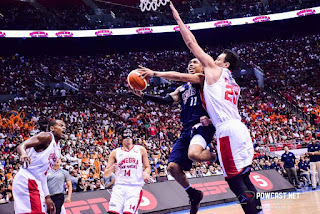 Chris Newsome and the Bolts defied the odds to force a Game 7.
One team is hoping to celebrate their second consecutive Governors' Cup championship by the end of the night while one team is hoping to stay in the title hunt and extend this series to a Game 7 on Friday at the Philippine Arena. For the defending champions, win Game 6 and you get to enjoy the rest of the night.

After reading this, I’m not sure I ha…
Best Wall Safes Review & Buying Guide…
Use Drill Attachments and Get Better …
Hank
Choosing A Tree For Your Tree House
For the Meralco Bolts, on the other hand, provide Allen Durham with the much-needed reinforcements and they might just extend this best-of-7 Finals series to a winner-take-all match. Might.
Nope. The balloons and the confetti will have to wait until Friday as the Meralco Bolts did what they have to do to extend this series to a rubber match after they beat Ginebra, 98-91 in Game 6.

Garvo Lanete started things off in Game 6 with a three-pointer as the Meralco Bolts raced to a 12-4 advantage after Chris Newsome scored on a fastbreak lay-up halfway through the first quarter. Around that span of time, the Barangay Ginebra Gin Kings were only shooting 25% from the field which explained why Tim Cone called a timeout.

After Ginebra cut the lead down to 5, at 15-10, the Bolts answered right back with their scoring run of their own to put up a 9-point lead. Another trey from Lanete gave Meralco their first taste of a double-digit advantage, at 25-14 as Ginebra mysteriously struggled to get anything going on offense. Meralco held a 29-17 after the first 12 minutes of action as Lanete already have 8 points under his name as he nailed 2 of Meralco's 4 threes to start the game.
Meralco's offense vanished at the early moments of the second quarter which enabled the Gin Kings to cut down the deficit down to 6, at 29-23 as Ginebra's defense held the Bolts scoreless for almost 3 minutes as the Bolts succumbed to commit costly turnovers. Garvo Lanete finally broke the spell of the Bolts on a teardrop and Aleen Durham added another lay-up to re-establish a nine-point cushion, at 33-24. Baser Amer later drained a trey and Durham added another inside basket as Meralco established a 14-point advantage heading into another Ginebra timeout.
5 points from Jared Dillinger plus a free throw from Amer made it 44-24 with 6 minutes to play as Ginebra was struggling terribly to put the ball into the basket as Reynel Huganatan drained another three-pointer to keep the Bolts by 17 points. Both teams walked into the halftime break with the Bolts leading, 54-17.

The Digits at the Half

Allen Durham, as expected led the way for the players of Norman Black with 13 points and 11 rebounds but this time, he had more reinforcements as Reynel Hugnatan had 11 points off the bench while Lanete added 10 as a starter. Three-point shooting has been the key for Meralco as it was evident in the first half of Game 6 which saw  the Bols make 7 of their 16 shots from outside
For Ginebra, Justin Brownlee matched Durham's numbers with 13 points on his own but no one else followed through for the Gin Kings as Greg Slaughter had 8 points while LA Tenorio scored 6 points on 3 of 9 field goal shooting. Almost everything went terribly wrong for the champs, at least in the first half of Game 6 as Ginebra failed to match the intensity of Meralco as evident in their points scored on fastbreak opportunities, an area where Tim Cone's boys only scored 2 points while allowing Meralco to score 12 points on the break.

From the highest of 17 points during the halftime break, Ginebra relied on Justin Brownlee as the Gin Gin Kings went on a scoring burst to cut the deficit down to 13 points, at 61-48 with under 8 minutes to play in the 3rd quarter. After a Meralco timeout, Greg Slaughter unleashed a personal 4-0 run as part of Ginebra's 9-0 run cut down the lead down to a single digit for the first time since the first half as Garvo Lanete scored on the inside for a rare Meralco basket.
Later, Scottie Thompson drained a trey as both teams reached the halfway mark of the third quarter. Garvo Lanete scored on another three-pointer to make it a double-digit lead for the Bolts as Gnebra called a timeout with under 5 minutes to play. Ginebra managed to keep the deficit down to single digit the rest of the way as they entered the final quarter just down 6 points, 75-69.

Right after Ginebra cut down the deficit to 6 points anew, Meralco regained control as Allen Durham went to work to open the 4th quarter and Reynel Hugnatan drained another three-pointer to give Mealco, a 13-point lead at 85-72with 8:08 remaining in the 4th quarter.
Ginebra's back-to-back threes off a timeout brought the deficit to a single digit, again but Cliff Hodge on a highly-contested lay-up as Chris Newsome added a free throw for an 11-point advantage with the 4th quarter already halfway done.

One Last Push for Ginebra (?)

Ginebra's slowly began to click as LA Tenorio's trey with under 6 minutes left in the game brought his team within 6 points, at 88-82 prompting Norman Black to call another timeout. Moments later, Mark "The Spark" Caguioa drained a turnaround jumper to bring Ginebra within 4 points, at 90-86- the closest the Gin Kings came within all game along. But that indeed was the closest Ginebra came within as Meralco scored on a free throw plus a putback from Allen Durham to put the Bolts up 7 with under 2 minutes play. Then, Allen Durham scored on the inside with 40 seconds left on the clock and to lock up a Game 7 on Friday, Reynel Huganatn drained his 6th three-pointer of the game with 16 seconds left.

The Digits that Mattered

Choosing A Tree For Your Tree House

This Samsung refrigerator does your grocery shopping for you

Hugnatan Hits 6 Threes, Durham has 28 to Force a Game 7