Kevin “The Silencer” Belingon is a Man on a Mission at ONE: KINGS OF DESTINY 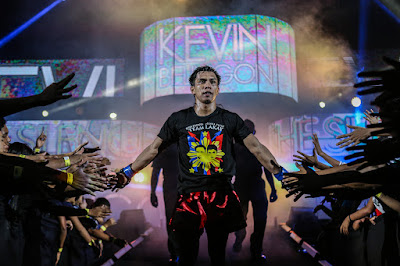 The Filipino homegrown talent seeks to avenge the loss of teammate Geje “Gravity” Eustaquio to Finnish standout Toni “Dynamite” Tauru.
Eustaquio and Tauru crossed paths at ONE: AGE OF DOMINATION last December, with the latter easily earning his first victory inside the ONE Championship cage at the expense of the Team Lakay striking specialist.

Canadian Online Casinos at its Best
Assiette dessert à rayures gris en po…
Urban, Suburban, or Rural Practice: P…
Q&A: The Cold Stares, Rock & Roll Duo
Lunch Bunch Idea: Rainbow Pinwheels
Tauru wasted no time in the stand-up department with his Filipino foe, shooting immediately for a single-leg takedown and driving Eustaquio to the mat. From there, he utilized his size and strength advantage to power through a rear-naked choke to notch the win in the first round.
Belingon will have the chance to get his hands on Tauru as he is booked to lock horns with the Finnish fighter on the undercard of ONE: KINGS OF DESTINY, which takes place at the 20,000-seater SM Mall of Asia Arena in Manila, Philippines on 21 April.
“It’s not personal to me. Winning and losing are part of this beautiful sport. However, in this fight, he will face a natural bantamweight fighter. Geje is not a natural bantamweight. This time it will be an even playing field. Let’s see what he can do against me,” Belingon stated.
Belingon has been a bantamweight competitor since he started his Mixed Martial Arts career in 2009, owning 19 professional bouts.
With an experienced prizefighting record of 14-5, Belingon is known as a fierce combatant with the ability to finish opponents in a variety of methods.
The 29-year-old Baguio City native has five knockouts victories on his résumé and is one of the most feared strikers in ONE Championship’s bantamweight division.
“I’ve been a staple of this weight class for a long time. I’ve fought the best of the best. I know Toni Tauru’s caliber as a fighter. I am not taking this fight lightly. My focus is on walking away with my name being announced as the winner,” Belingon said about his marquee match-up against Tauru.
Although Belingon is confident that he will have his hand raised in triumph at ONE: KINGS OF DESTINY, many cageside pundits are worried that he might suffer Eustaquio’s fate when he faced Tauru three months ago.
Tauru overwhelmed Eustaquio with his size and length advantage as the Finnish stalwart stands 5-foot-10 and has a reach of 70 inches.
With Tauru putting Belingon into a disadvantage in height and length, the Team Lakay representative bared that he has tapped taller training partners to prepare him for his opponent’s lanky physique.
“I am training with other Team Lakay standouts who are taller than me. I need to get used to it because Toni Tauru is long and rangy. He uses his length to his advantage,” he stressed.
Even if he has a tall order in front of him, Belingon believes in his chances against Tauru, citing that his speed and punching power as his primary arsenal to offset his Finnish counterpart’s leverage.
“Toni Tauru should be fully prepared for this fight. He may be taller than me, but I am going to come in there. He needs to stop what I am bringing,” he warned.
​For more updates on ONE Championship, please visit www.onefc.com, follow on Twitter and Instagram @ONEChampionship, and like on Facebook at https://www.facebook.com/ONEChampionship.
About ONE Championship™
ONE Championship is the largest sports media property in Asian history. Headquartered in Singapore, the world’s most exciting mixed martial arts organization hosts the largest sports entertainment events across Asia featuring the best Asian mixed martial artists and world champions, all signed to exclusive contracts, on the largest media broadcast in Asia. ONE Championship is broadcast to over 1 billion viewers across 118+ countries around the world with some of the largest global broadcasters, including FOX Sports, Setanta, MNC, Astro, Thairath TV, ABS-CBN, TV5, MYTV, HTV, OSN and more.

Kevin “The Silencer” Belingon is a Man on a Mission at ONE: KINGS OF DESTINY