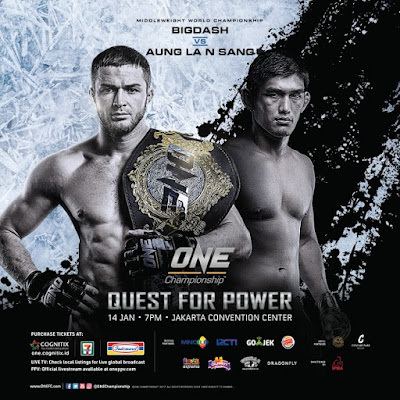 The largest sports media property in Asian history, ONE Championship™ (ONE), has just announced that middleweight contender Marcin Prachnio has suffered an injury and is out of ONE: QUEST FOR POWER. The blockbuster fight card will, however, proceed as scheduled for 14 January at the Jakarta Convention Center. In the main event, ONE Middleweight World Champion Vitaly Bigdash will defend his title against Prachnio’s replacement, “The Burmese Python” Aung La N Sang of Myanmar.

Lunch Bunch Idea: Rainbow Pinwheels
Samsung Galaxy M42 5G Launched in Ind…
Important Things You Need To Know Abo…
Music Profile: Crissi Cochrane - Soul…
How to Get Rid of Ants
In addition, two bouts have been added to complete an amazing fight card. Saygid Guseyn Arslanaliev is set to take on Georgi Stoyanov, while light heavyweight contenders Igor Subora and Sherif Mohamed do battle inside the ONE Championship cage.
Ticket information for ONE: QUEST FOR POWER is available at onefc.com.
Victor Cui, CEO of ONE Championship, stated: “While it is unfortunate that Marcin Prachnio has fallen to injury, fans of ‘The Burmese Python’ have every reason to be excited, as Yangon’s own martial arts hero Aung La N Sang has been tapped for the main event against ONE Middleweight World Champion Vitaly Bigdash. He has definitely earned a shot at ONE Championship gold with his spectacular performances as of late. We’re ready to blow the roof off the Jakarta Convention Center. You will not want to miss this!”
ONE Middleweight World Champion Vitaly Bigdash of Rostov-on-Don, Russia, will be making the first defense of his title since winning the belt back in October of 2015. With a resounding technical knockout victory over former champion Igor Svirid, Bigdash displayed true grit and determination in one of the most action-packed fights in ONE Championship history. Bigdash showcased tremendous heart and resolve, overcoming a devastating attack by Svirid to score the upset. Now, he takes on his first challenger as champion in Aung La N Sang.
31-year-old middleweight standout Aung La N Sang is arguably one of the world’s most renowned fighters from Myanmar, whose constricting style of fighting has earned him the moniker of ”The Burmese Python”. Born in Myitkyina in the mountainous Kachin State, Aung La N Sang belongs to an ethnic minority known as the Kachin. A veteran of 29 professional bouts with a record of 19-9-0 and 1 NC, he is on a four-fight win streak in ONE Championship, including three victories by highlight-reel finish. The Myanmar national hero is set to challenge ONE Middleweight World Champion Vitaly Bigdash next.
Undefeated Turkish lightweight contender by way of Dagestan, Russia, Saygid Guseyn Arslanaliev is rapidly making a name for himself as an unstoppable force inside the ONE Championship cage. He has just four victories so far in his young Mixed Martial Arts career, but they are four of the fastest finishes in the promotion, resulting in an average cage time of just under a minute. Three of Saygid’s wins have come by technical knockout and one by submission, with all coming in the very first round. The 22-year-old’s next challenge comes against Georgi Stoyanov.
Georgi Stoyanov is a mixed martial arts veteran with a professional record of 19 wins and 11 losses. He is a submissions grappler who began his career largely competing in his home country of Bulgaria as well as in Russia. 11 of his 19 total victories have come impressively by submission. Stoyanov is set to make his first appearance inside the ONE Championship cage when he takes on one of the fastest rising stars in the promotion in Saygid Guseyn Arslanaliev.
36-year-old Igor Subora of the Ukraine is a former URCC Heavyweight Champion who lives and trains out of Manila, Philippines. Subora made his ONE Championship promotional debut against none other than reigning ONE Heavyweight World Champion Brandon Vera in December of 2014, but has recently made the transition to the light heavyweight division. Subora, who owns a 5-3 professional record comprising of four big knockouts and a submission, is set to face Egypt’s Sherif Mohamed next.
Sherif “The Shark” Mohamed of Cairo, Egypt, owns a 8-1 professional mixed martial arts record. The Evolution Light Heavyweight Champion, Mohamed is a well-versed kickboxer and wrestler with all eight of his wins coming by finish. Of his total victories, Mohamed owns four submissions and four knockouts, proving his versatility and well-rounded fight game. The Egyptian Top Team standout will make his ONE Championship debut against Igor Subora.