8 Filipino Fighting Talents to Dominate ONE: Age of Domination 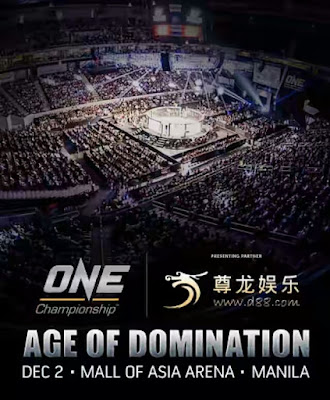 Eight Filipinos who significantly made waves in the international MMA scene will be fighting on December 2 at the Mall of Asia Arena in Manila. ONE Championship is returning to the fighting capital of Manila with the world’s most exciting MMA action at ONE: AGE OF DOMINATION. Set to once again electrify a packed SM Mall of Asia Arena, the blockbuster event will see the return of Filipino MMA superstar and ONE Heavyweight World Champion Brandon "The Truth" Vera after claiming his title last December 11, 2015 following a knockout verdict in just 26 seconds over Paul Cheng. He will defend the crown against the unbeaten Japanese challenger Hideki Sekine in a clash between two of Asia's top heavyweights.

"My opponent is an undefeated Japanese martial arts veteran who is really strong and has a very capable ground game. I think is a good test for me to see where I am at in my career. Japanese fighters are very, very tough. I will need to come into the fight in my best condition. I don’t want to take any opponent lightly,"

Filipino-American Brandon “The Truth” Vera is a 39-year-old mixed martial arts veteran with a 14-7-0, 1 NC professional record. He joined ONE Championship in 2014 after competing for over a decade as one of the world’s best fighters. A devastating striker with well-rounded submission grappling skills.

Japanese heavyweight contender Hideki Sekine is set to make his ONE Championship debut after making a name for himself in Japanese MMA promotion DEEP. Known for his brute strength and technical grappling ability, Sekine owns three victories by submission and another three by knockout. He now figures in the toughest battle of his career against ONE Heavyweight World Champion Brandon Vera.

That's not the only world championship on the line in Manila. The ONE Bantamweight World Championship pits the reigning titleholder Bibiano "The Flash" Fernandes against rising challenger Reece "Lightning" McLaren at the co-main event.

To deliver more action-packed, exciting fights that Filipino ONE FC fans have come to expect, the biggest stars in Asian MMA will be pitted against the Philippines' best fighting talents, with the list who will showcase their wares on the international MMA stage including former ONE Featherweight World Champion Honorio Banario and top contenders Mark Striegl, Geje Eustaquio, Edward Kelly, Danny Kingad, Eugene Toquero and April Osenio.

28-year-old Filipino mixed martial arts sensation Mark “Mugen” Striegl is one of the top fighters at bantamweight and featherweight. He began his professional career on a 12-fight win streak and made a successful ONE Championship debut in 2014 against American Casey Suire. Striegl then joined the prestigious Evolve Fight Team in 2015 and now trains with Asia’s best world champions in Singapore. He is set to make his highly-anticipated return to the ONE cage against Rafael Nunes.

Rafael Nunes is a professional mixed martial artist with a 10-1 record and is one of the top lightweights to emerge from Brazil. He has steamrolled through the competition in his home country with a knack for winning by exciting finish. A Brazilian jiu-jitsu brown belt, Nunes is equally comfortable finishing his opponents by submission or strikes. He looks to showcase his multi-faceted skillset in his next bout, and will face a tough challenge when he takes on Mark Striegl.

Geje “Gravity” Eustaquio is one of the most proficient wushu practitioners in the Philippines. His solid striking and grappling skills have led him to big wins over the course of his career in ONE Championship. Training in the high altitudes of Baguio City, Eustaquio hones his craft with his world-class teammates at the famed Team Lakay. Known for his ability to keep his composure while facing adversity, Eustaquio is set to do battle against Toni Tauru.

31-year-old Toni “Dynamite” Tauru of Utti, Finland, is a professional mixed martial artist competing in ONE Championship’s flyweight division. He owns a record of 10-4-1, with seven of his wins coming impressively by submission. A feared grappling specialist, Tauru is looking for his first victory inside the ONE Championship cage, but he will have to contend against Geje Eustaquio in order to get it.

Team Lakay’s Honorio “The Rock” Banario has long been one of the Philippines’ most respected mixed martial arts veterans. His vast cage experience has brought him all over Asia, with many memorable battles against top divisional talent. Among his many skills, Banario possesses high-level striking and steadily improved grappling. The former ONE Featherweight World Champion, Banario is an expert in wushu, and is ready to showcase his lightning-quick strikes against Rajinder Singh Meena.

Rajinder Singh “Knockout” Meena of India is a professional mixed martial artist competing in the ONE Championship lightweight division. He owns a record of eight wins and two losses, with all eight of his victories coming by finish. Possessing a robust grappling skill set, Meena owns five impressive wins by submission. In his next bout however, he will have to find a way to deal with world-class striker Honorio Banario.

Edward “The Ferocious” Kelly is a 32-year-old Filipino MMA talent and one of the brightest featherweight prospects to emerge from the Philippines. A mixed martial artist with a complete striking and grappling skill set, Kelly brings Team Lakay’s world-renowned wushu to centerstage as he looks to showcase his expertise inside the ONE Championship cage. In his last bout, Kelly scored a one-punch knockout of veteran fighter Vincent Latoel. He seeks to replicate the feat this time against Sunoto.

31-year-old Sunoto “The Terminator” of Jakarta, Indonesia, is a professional mixed martial artist competing in the ONE Championship featherweight division. He owns an MMA record of five wins and two losses, including three highly-impressive submission victories. In his last two bouts, Sunoto finished two high-caliber opponents in Burn Soriano and countryman Yohan Mulia Legowo. In his next bout, Sunoto takes on Filipino rising star Edward Kelly.

Atomweight standout April Osenio of the Philippines is known as Team Lakay’s fierce female warrior. The 22-year-old prospect trains out of the high-altitudes of Baguio City along with her more experienced Lakay brothers. In her last bout, Osenio upset Malaysian fighting belle Ann “Athena” Osman impressively by guillotine choke submission, highlighting her growing skills beyond the striking art of wushu. She now aims to advance her standing in ONE by taking on a new challenge in Jenny Huang.

25-year-old Jenny Huang is female mixed martial artist who hails from Taiwan. Unbeaten with a professional MMA record of four wins and no losses, Huang also owns two impressive submission victories. In her most recent bout, Huang needed less than one round to finish off Indian fighter Jeet Toshi, winning by arm-triangle choke. Now, Huang steps up in competition to face the Philippines’ April Osenio.

An unbeaten flyweight contender from Team Lakay, Danny Kingad is a professional mixed martial artist with a perfect three win, no loss record. One of the top prospects to come out of the high altitudes of Baguio City, Philippines, Kingad is a tremendous striker, operating out of his world-class wushu base. In his most recent bout, Kingad needed just one round to impressively stop Malaysia’s Muhammad Haidar. He will take on Eugene Toquero next.

Flyweight standout Eugene Toquero is a former celebrity mixed martial arts and fitness coach in his native Manila, Philippines. The Filipino stalwart has a knack for highlight-reel striking techniques and operates at a pace which opponents find hard to keep up with. In his last bout, Toquero nearly defeated former ONE Flyweight World Champion Adriano Moraes, losing by submission in a tough contest. Now he faces fellow Filipino Danny Kingad next.

Kicking off ONE: AGE OF DOMINATION are flyweight fighters Liu Peng Shuai and Sim Bunsrun, who are set to do battle in a three-round bout. Liu is the Hefei Flyweight Tournament Champion, while the Cambodian Bunsrun is a winner of his last two fights including an impressive first-round submission in his promotional debut.

In the first bout of the evening, 18-year-old Chinese fighter Xie Bin takes on Indonesia’s Mario Satya Wirawan. Xie last appeared in a tremendous contest against Casey Suire, while Wirawan went to battle with another future of Philippine MMA Burn Soriano, the 15-sec spinning backfist KO man. Both fighters are looking to get back on track with a victory.

Be at the SM Mall of Asia Arena to support Brandon Vera and the seven more Filipinos excelling in MMA as they take on their opponents in front of their predominantly home crowd.

“The Philippines is just as much my home as the United States is, and I am truly blessed to be able to compete here in front of all the Filipino fans. It’s an amazing country and we discover something new everyday. It’s an honor to be able to headline massive ONE Championship fight cards.”

Here's the image of the full fight card: 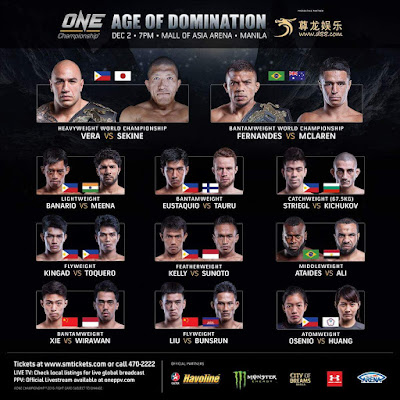 Get your tickets now, because this is one sports entertainment experience not to be missed!

8 Filipino Fighting Talents to Dominate ONE: Age of Domination