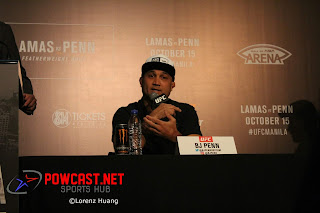 BJ Penn is not returning to the octagon for the third time.

The two division world champion and Hall of Famer is out of UFC Fight Night 97 card due to undisclosed injury. The match between him and Ricardo Lamas was the main event of the second UFC event to be held again at the MOA Arena, Manila.

BJ Penn announced in January that he is coming out of retirement to make a comeback to the octagon. A month after, however, his former BJPenn.com editor accused the "The Prodigy" of sexual assault against his girlfriend. In April, UFC stated that no criminal or civil charges have been filed against Penn, nor has any action been taken by local law enforcement. He was once again booked for a fight against Cole Miller on the main card of UFC 199.

BJ Penn was suspended by USADA for six months due to out-of-competition IV use last May which ended September. The fight which was going to be in the featherweight division was again scrapped out of the UFC 199 card.

He was last seen in action in July 2014 against Frankie Edgar, where he lost in the third round via TKO.

This is the the third setback BJ Penn has experienced on his return to competition this year. We hear nothing on a replacement for Penn yet. Our very own Phillipe Nover who recently fought Renan Barao offers to step in to face Ricardo Lamas and save the main event of UFC Manila though.

How Journalism, Poetry and BJJ can make you a Successful Content Marketer with Cameron Conaway