"Jenni's 'Noddy', because she's clueless," she continues, knowing full well that team-mate Jennifer Pinches, 18, is watching off-camera. She gets through that sentence and then collapses into giggles. "Sorry, Jen!" 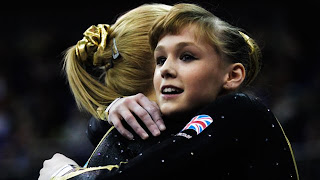 Tunney is young but not remotely cowed by her senior colleagues, surroundings or imminent Olympic debut. It wasn't that way on her first day, five years ago.

"She was tiny, quite scruffy and overwhelmed by the environment, but keen and excited to get in there and give it a go," remembers her coach, Claire Duffy.
"Whe she first won a medal, you could see how she loved to train to win. She'd had a taste of medals and that was exactly what she wanted to do: she wanted to be a champion."
WATCH LIVE OLYMPICS 2012
And she is one. Tunney heads to London 2012 as the British all-around champion in her first senior year - meaning she is a threat on each of the four pieces of apparatus - having ousted far more experienced gymnasts for her slot at the Games.

"It's different. It's a surprise that I'm actually at this level," she admits. "But if you're picked then you're obviously good enough, whatever age you are.

"Even though I'm skinny, people say I have a lot of power. I do have rather big kneecaps, they're a bit strange, but if you can work with your own body it's fine. Your body changes a whole lot during this sport, you have to learn to adapt.

"We keep track of our weight and height, so our coaches know if we've put on a bit of weight because we've grown a bit, and then they know when to change things because of the potential for injury."

Tunney and her coach are almost inseparable. Time outside the gym is spent at Duffy's house, doing homework on the rare days she has any.

"I've not been to school for quite a long time," Tunney admits, "but they know why I'm away and where I'm going, they're supportive about everything and I sometimes take work with me.

"I stay with Claire quite a lot. With Claire, as soon as you walk in the gym she knows if you're tired or upset.

"If you're buzzing she'll make you do a bit more, but it makes it a lot easier knowing that if you're tired, she'll let you get away with a few things. It helps us to know that she can be nice, but she's doing it for our own good as well."

Fine-tuning someone this young for an Olympic appearance is not easy, nor are physical changes the only worry. How will a 15-year-old in her first senior year react when she steps inside the Olympic arena to compete for the first time?

"She can either be totally overwhelmed and have a greater chance of error, or she can be oblivious and have a storming competition, not really knowing what's around her," says Duffy.

"But I don't believe it's stressful. I always tell the girls any competition is just another competition. You don't highlight it being a major event, you could scare them or make them think more of it than they should.

"You do get a bit nervous for them, but only because they work so hard - she deserves to get good results. You want to be able to justify all the hard work you've made them do, in order for them to realise that's exactly what you need to do to be successful."

It helps that Tunney was sent by British Gymnastics to compete at the Olympic test event, in the same arena in January, then competed at New York's Madison Square Garden in March.

"The atmosphere at the test event was really good. The reactions you got from the home crowd after routines were incredible," Tunney recalls.

Yet in a choice between overwhelmed or oblivious, right now she is squarely in the latter camp.

"My mum went to the test event, and my grandma and grandpa went. They always say they're proud but I don't take it in - it's just me doing gymnastics. They obviously see it in a different way, as a major thing."

Even competing alongside three-time world champion Beth Tweddle does not faze Tunney. A generation of gymnasts have grown up being asked about Tweddle, having all grown up watching the sport's 27-year-old trailblazer on TV. Tunney can remember a time when she let that get to her, but not any more.

"When I came here, I was amazed who I was training with. I used to get distracted a lot. My old coach would be like 'Rebecca, come on,' while I was so amazed at what Beth was doing.

"Seeing her in real life was like my biggest dream ever had come true. But I know her so well, we see her every day.


This post first appeared on Live Sports Streaming 2012-13, please read the originial post: here
People also like
NBA Jam Game Comparison
How come so many Christians don’t really know God?
Tekashi 6ix9ine Gets Punched In The Head Inside Miami Nightclub, Right In Front Of His Goons
Newchic – Up to 20% off Men’s Spring-Summer Fashion