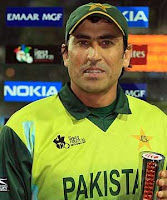 ISLAMABAD: An annoyed Younis Khan on Tuesday quit captaincy of the Pakistan team after being grilled by the National Assembly Standing Committee on Sports, which wanted him to explain the team's performance in the recent Champions Trophy.The standing committee had asked Pakistan Cricket Board chairman Ejaz Butt, Younis, coach Intikhab Alam and manager Yawar Saeed to explain their defeat against Australia and New Zealand in the Champions Trophy and the Pakistan captain was upset at the grilling. It was not immediately known whether the Pakistan Cricket Board has accepted his resignation or were persuading him to re-consider his decision. Television reports said that PCB has rejected his resignation. The hostile parliamentarians raised a number of questions on the team's performance in those two matches in the backdrop of allegations that the cricketers tanked those games.
Younis got so annoyed with the allegations that he tendered his Resignation, something he had warned earlier. Other officials, however, were more restrained in their response and tried to convince the parliamentarians that the players could not be blamed for those defeats since it's all part of the game. They said it was just not Pakistan's day when they lost those matches. The Standing Committee did not look too perturbed with Younis' sudden resignation, which they described as an internal matter of the PCB.

The 31-year-old Younis, who had led Pakistan to Twenty20 World Cup triumph earlier this year, faced harsh criticism after the team crashed out in the semifinal of the Champions Trophy. A provincial Sports Minister, who happens to be a PCB Governing Council member, raised match-fixing allegations, while others sniffed an Indian conspiracy behind Pakistan's early ouster from the tournament in South Africa. Pakistan cricket plunged into fresh crisis on Tuesday with Younis stepping down as captain of the national team in dramatic circumstances and refusing to take back his resignation despite persuasion by the Chairman of the Cricket Board. The high drama took place during the hearing of the National Assembly Standing Committee on Sports in Islamabad which was being held to discuss the performance of the national team in the recent Champions Trophy. Younis submitted his resignation during the hearing to the Pakistan Cricket Board Chairman Ejaj Butt, protesting the statement made by the Chairman of the Standing Committee on Sports Jamshed Dasti, who had alleged that the team had deliberately under-performed against Australia and New Zealand in the Champions Trophy.

More drama followed as Butt returned the resignation to Younis and Jamshed Dasti told the angry cricketer that his statement had been misunderstood and he never made any match-fixing allegations against him or his teammates. But when the hearing ended and Butt came out of the hearing and sat in the car, the 31-year-old Younis came running behind him and again handed over his resignation. "Younis told the Chairman he didn't want to be captain and left in his car," an eyewitness said. Butt later told reporters that he had full confidence in the leadership abilities of Younis and had told him to take back his resignation. "But obviously if this matter is not resolved, then it would be discussed at the meeting of the governing council on October 19," Butt said.

Younis, who had led Pakistan to the Twenty20 World Cup triumph earlier this year, was hurt by the match-fixing allegations levelled at him and his teammates after they crashed out in the semifinals of the Champions Trophy. A provincial sports minister, also a PCB Governing Council member, alleged an Indian hand behind Pakistan's semifinal defeat, while others felt Pakistan had tanked their matches against Australia and New Zealand. Younis played the semi-final match with a fractured finger and dropped a crucial catch that proved costly and it only added fuel to the fire at home.