Bournemouth 0-3 Arsenal: 5 Talking Points as an Odegaard brace and Saliba wonder-goal seal the win for the Gunners | Premier League 2022-23 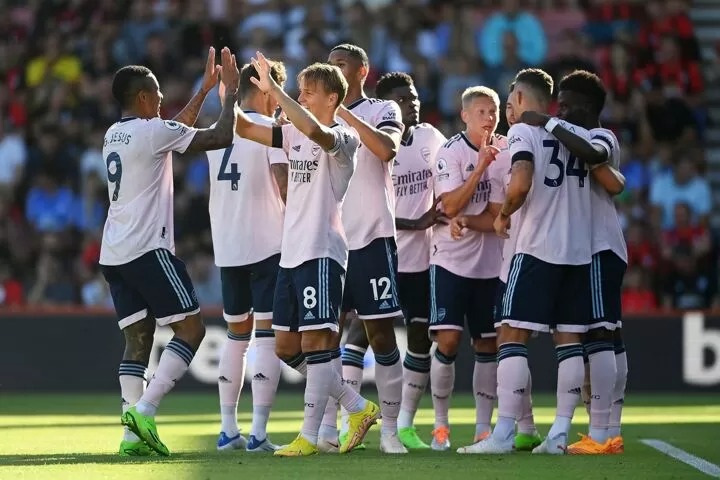 Arsenal defeated Bournemouth 3-0 in the Premier League on Saturday, August 21. It was the last game of an exciting matchday in which all but two teams out of 12 scored at least one goal.
The Cherries started off their campaign with losses against Aston Villa and champions Manchester City. In addition, they failed to get on the scoresheet in both those games. Scott Parker's men were under pressure after facing the realities of playing in the top flight.

4WD Rc Auto 2.4G Afstandsbediening Au…
Online Black Friday Deals for Cell Ph…
The Gunners, on the other hand, made a flying start to their season, in contrast to their nightmare start last year. They defeated Crystal Palace and Leicester City in their first two games, scoring six in the process. Mikel Arteta fielded the same line-up for the third-straight game as Arsenal aimed to maintain their perfect start.
Arsenal dominated the opening exchanges, deploying the high press with great effect. They held a high line, preventing Bournemouth from playing through them. Gabriel Jesus continued in his rich vein of form, dropping deep and making darting runs forward with the Ball.
The Gunners were first on the scoresheet after just five minutes as captain Martin Odegaard scored to make it 1-0. Gabriel Martinelli attempted the initial shot which was saved by Bournemouth goalkeeper Mark Travers, but it fell straight to the Norwegian.
The visitors added to their lead a few minutes later as Gabriel Jesus cushioned a pass towards Odegaard. Arsenal's skipper hit the ball with venom into the far corner to make it 2-0 after 11 minutes. The Gunners held onto their lead as they went into the break.
Arsenal started the second half with more composure than they ended the first with. They looked more secure with the ball, moving it around to prevent being closed-down by Bournemouth. It allowed them to avoid overly-physical encounters and play their own style of football.
William Saliba scored a stunning goal with his weak foot from the edge of the box after 54 minutes. Granit Xhaka controlled a diagonal pass and rolled it towards the Frenchman, who curled it into the top right corner to make it 3-0.
Mikel Arteta gave his substitutes game time as he used all five permissible changes to rotate his ranks. After a relatively easy 90 minutes, Arsenal walked away from the South Coast with all three points.
That said, let's take a look at the five talking points from the game.
#5 Bournemouth were poor in possession
The Cherries started the first half poorly as they allowed Arsenal to run all over them. They completed just 147 passes compared to the visitors' 398. They were in possession of the ball for just 27% of the time, owing to their inability to string together a series of passes.
Bournemouth also struggled in the final third as their expected goals (xG) for the first half were a shocking zero. They even failed to register a single touch in Arsenal's penalty area.
Players like Marcos Senesi and Ben Pearson struggled and were subbed off at half-time.
#4 Arsenal's high press is impressive but unsustainable
Mikel Arteta has done extremely well to ingrain the idea of playing high up the pitch to close down opponents. Led by a front three of Martinelli, Jesus and Bukayo Saka, Arsenal did well to contain Bournemouth in their own territory in the first 30 minutes.
However, after a few stoppages midway through the first period, they seemed to slow down and allow the Cherries more possession. It did not put them in direct danger as their hosts failed to be productive with the ball. But playing a loose game with a relatively narrow lead could prove problematic against tougher opposition.
#3 William Saliba has potential to be world class
They say the key to winning a game is to make a strong start. Arsenal were able to pull it off thanks to their forwards, who caused mayhem in the opponents' half. However, they were also solid at the back, led by William Saliba, who was exceptional throughout, but had a particularly impressive first half.
He also scored a goal with what could be deemed a top striker's finish after 54 minutes. Granit Xhaka trapped the ball and played it towards the edge of the box. Saliba latched onto the ball and unleashed a curler with his weak left foot into the top right corner to make it 3-0.
His addition has allowed Arteta to deploy a 3-4-1-2 formation in possession - the key to the Gunners' playing style this season.
#2 Martin Odegaard makes this Arsenal side tick
Twenty-three-year-old Norwegian Martin Odegaard was named captain of the side before the start of the season. His passing, movement and positioning are crucial to the Gunners' high-intensity play.
He made a blistering start to the game, scoring two goals inside the opening 15 minutes. Odegaard's emphatic finishes were a strong response to his critics, who questioned his abilities following a few misses in the last two games. It was his first time scoring a brace in a game since 2014!
Odegaard passed the ball with 85% accuracy, including one cross and two long balls. He attempted three shots, scoring from both his shots on target, with the other one blocked. He also won four of his nine duels in an impressive performance away from home.
#1 Gabriel Jesus has transformed Arsenal
The Gunners' acquisition of Gabriel Jesus from Manchester City for £45 million looks like a steal given his performances. He has hit the ground running with two goals and three assists in his first three games for Arsenal.
Prior to kick-off, his touches in the opposition box had already near-matched what Alexandre Lacazette managed throughout last season.
Jesus recorded 49 touches on the ball in their 4-2 win against Leicester last time around. In comparison, Lacazette averaged 36 touches, while Pierre-Emerick Aubameyang averaged just 26 per 90 minutes last season. He is willing to drop deep and create chances of his own and bring teammates into the game.
The Gunners will aim to mount a stronger challenge to finish in the top four this season and Jesus will be crucial to their charge.

Bournemouth 0-3 Arsenal: 5 Talking Points as an Odegaard brace and Saliba wonder-goal seal the win for the Gunners | Premier League 2022-23