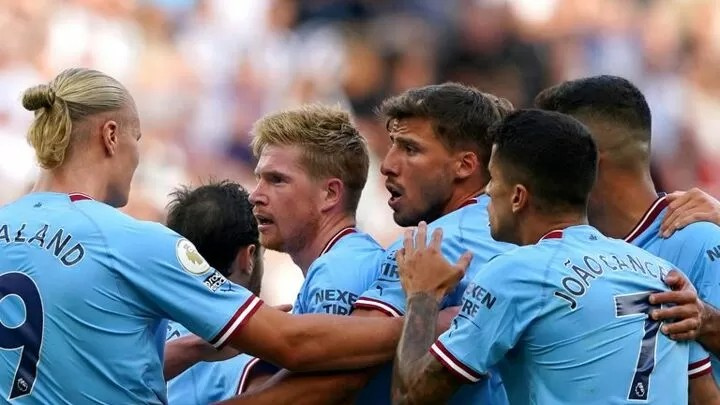 Bernardo Silva earns champions draw after two-goal comeback.
Manchester City displayed their championship resolve as they came from two goals down to salvage a 3-3 draw in an all-action game at Newcastle.
City had won 27 of their previous 28 games when scoring first but, after Ilkay Gundogan's early opener, they fell 3-1 down.
Allan Saint-Maximin made all three of Newcastle's goals as City found it impossible to deal with the winger's pace and power, first crossing for Miguel Almiron to level with a diving header which was initially ruled out for offside before a VAR intervention.
After a surging run forward Saint-Maximin then found Callum Wilson for the second, with the striker beating Ruben Dias before firing past Ederson. Kieran Trippier then curled in a third with a stunning free-kick after Saint-Maximin had been fouled by John Stones.
But City, unbeaten in the Premier League since February, would not go down without a fight and were given a lifeline when Erling Haaland rifled home from a corner, before Bernardo Silva finished off a piece of genius playmaking from Kevin De Bruyne to level things up again.
The drama was not limited to the goalmouths with Trippier shown a red card by referee Jarred Gillett for a high challenge on De Bruyne, but VAR stepped in again and the decision was downgraded to a booking, and neither side could then find another breakthrough late on as a pulsating match at St James' Park ended level.
What's next?
Newcastle play away from home twice this week, first visiting Tranmere in the Carabao Cup on Tuesday; kick-off at 7.45pm.
Manchester City play Barcelona in a charity friendly at the Nou Camp on Wednesday night; kick-off at 8.30pm, before hosting Crystal Palace next Saturday; kick-off at 3pm.
Line-ups
Newcastle XI: Callum Wilson, Trippier, Schar, Burn, Pope, Almiron, Saint-Maximin, Joelinton, Guimaraes, Willock, S. Botman
Subs: Dubravka, Ritchie, Wood, Fraser, Krafth, Lascelles, J.Murphy, E. Anderson, S. Longstaff
Man City XI: Walker, Gundogan, De Bruyne, Cancelo, Ake, Stones, Ederson, Bernardo, Rodri, Haaland, Foden
Subs: S. Ortega Moreno, Mahrez, Ruben Dias, K. Phillips, Sergio Gómez, C. Palmer, J. Álvarez, Luke Mbete-Tabu