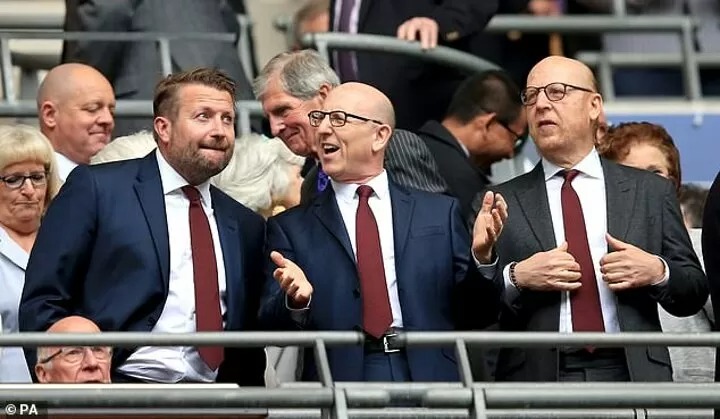 Manchester United have been warned against ‘getting into bed’ with an American company with links to Russia oligarchs sanctioned by the UK Government.
Apollo, the private equity firm in talks with United’s owners, have been accused of financial connections to Russia’s second-richest man and president Vladimir Putin’s £10billion sovereign wealth Fund, the Mail on Sunday can reveal.

Bumpa, Social Commerce Startup Raises…
IS LOVE A NEED OR WANT ?
11 Budgeting Apps That Will Change Th…
Top 5 Foods That Boost Testosterone M…
New York Times Crossword October 11 2…
The ex-wife of Vladimir Potanin submitted court documents that listed Apollo as one of the US companies in which he had financial interest when Potanin filed for divorce in 2013.
Potanin is Russia’s second-richest man, worth more than £22 billion, and was described by the Government as being part of ‘Putin’s inner circle’.
Apollo also bought Altpoint Capital, formerly known as Stone Tower, in 2011, a private equity fund also listed in the court documents submitted by his ex-wife. The Federal Bureau of Investigations (FBI) believed Potanin was the fund’s largest investor.
The firm were also involved in the $2bn (£1.7bn) project to build Steinway Tower in New York, into which another oligarch Albert Avdolyn is reported to have invested $21m (£17.7m).
Avdolyn is an energy and telecoms billionaire who left Russia for the US. Ukraine’s National Agency for Prevention of Corruption last month placed him on its list of individuals whom should be sanctioned by world governments for their alleged support for the war.
Apollo’s founder and former chief executive, Leon Black, meanwhile, sat on the advisory board of the Russian Direct Investment Fund, the country’s $10billion sovereign investment fund. Putin founded it in 2011.
‘Manchester Utd should be very careful about getting into bed with people who have made fortunes thanks to their closeness to Putin at any time, but especially now when Ukraine is under permanent attack,’ Chris Bryant MP, Chair of the Committees on Standards and Privileges, told The Mail on Sunday.
Apollo insist that, according to their records, Potanin never invested in their funds and that any interest he may have had in Altpoint Capital/Stone Tower was unwound before they acquired it. They maintain Avdolyan did not invest with them when they provided financing in the Steinway Tower project.
However, a letter from Maryland senators to then US secretary of the treasury in 2018 about concerns of Russian influence on the US elections claimed Altpoint Capital’s ‘largest investor is Russian oligarch Vladimir Potanin’.
Sportsmail revealed last week that Apollo are in talks with the Glazers over buying a minority stake in United, United and it is understood they are not the only investor engaged in the discussions.
Manchester United fan groups, as well as Gary Neville, have told Apollo they are ‘not welcome in Manchester’ with further concerns over links between Black and convicted Sex Offender Jeffrey Epstein.
It was because of his ties to Putin that Roman Abramovich had his assets frozen in April, leading to the sale of his former club Chelsea to the American businessman Todd Boehly.
Last year, Apollo led a group of investors looking to buy a £8.5bn stake in Aramco, Saudi Arabia’s oil company.
The US Senate Intelligence Committee report on Russian interference in the 2016 US presidential election says Black ‘reportedly met one-on-one with Vladimir Putin’ and that he also met billionaire Oleg Deripaska in Russia and America before the oligarch was sanctioned by the US in 2018.
Black also accompanied Donald Trump during his trip to Moscow in 1996 to pursue real estate deals. Black later added he and the former US president ‘might have been in a strip club together’.
Black left Apollo in March last year after an investigation revealed he paid Epstein £125m for financial advice and donated £8.5m to his charity between 2012 and 2017. Epstein died before trial in 2019 on sex trafficking charges.
Black was accused of rape in June last year by former mistress and Russian model Guzel Ganieva. She also alleged that Black tried to arrange a sexual encounter between her and Epstein in 2008. Black has denied the allegations.
‘Let us be blunt: much like the reviled Glazer family, you are not welcome in Manchester,’ said Boycott Movement Against the Glazers, the rebel United fan group, in an open letter. ‘Do not invest.
‘Supporters will no longer allow the club to be a piggy bank for unscrupulous owners, or an asset-stripping exercise for notorious equity firms.
‘We say “notorious” because it has come to light that Apollo’s founder Leon Black has a chequered past with disgraced sex offender Jeffrey Epstein. We note too that your firm has had some rather unfortunate scandals regarding fraud.
‘We say this genuinely and respectfully: for the sake of your company, your subsidiaries, your assets, do not go near our club.
‘If you do, the biggest sports club supporter base in the world will do everything in our power to tarnish your reputation and ensure it is synonymous with everything you hoped the world had forgotten.’
Talks between United’s owners, the Glazer family, and Apollo are understood to be about how much they will get for their shares, with no immediate plans for fresh money to be pumped into the flailing club with a crumbling stadium.
More anti-Glazer demonstrations are planned when Liverpool visit Old Trafford tomorrow. Their home game against Liverpool in May last year was postponed due to fan protests when supporters stormed on to the pitch.
United legend Neville said it was ‘totally unacceptable’ for United to be sold to a US investment fund.
‘Apollo have been mentioned but they need to know they will not be welcomed in Manchester,’ he wrote on Twitter.
‘The US model of sports ownership is all about significant return on investment (at all cost ie. Super League and Big Picture). The ownership model in England needs to change and US money is a bigger danger to that than any other international money. We need a regulator asap!’