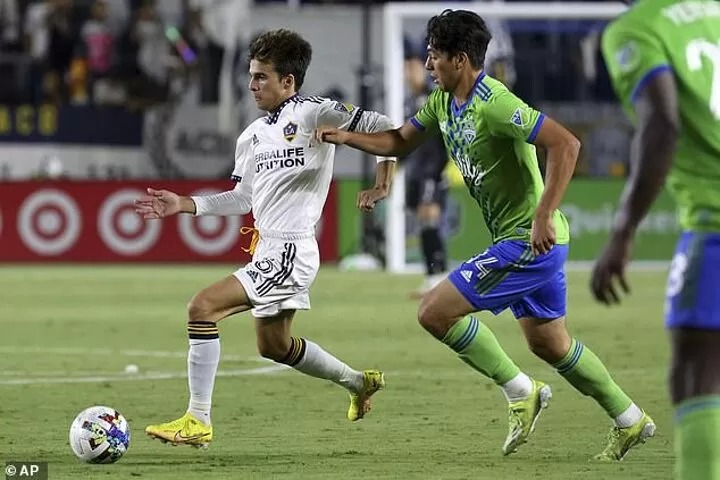 Riqui Puig made his eagerly awaited debut for the Los Angeles Galaxy in an exciting 3-3 draw with Seattle Sounders FC.
Puig signed with LA several weeks ago on August 4th after be allowed to leave Barcelona on a free transfer.

Foldable Mobile Phone Holder Ring Buc…
Samsung Launches A New Camera Assista…
Samsung GALAXY S22 REDUS la eMAG cu P…
‘Game of Thrones’ ended with a thud. …
Goblin Goo Green Halloween Punch
Puig came in as a substitute in the 62nd minute for former Barcelona teammate Victor Vaquez. Coincidentally enough Puig originally credited Vaquez on selling the Galaxy to him.
LA got off to a 2-0 lead in the first half and appeared to be well in control of the game after scoring in the 10th and 42nd minutes.
This would become undone after Seattle scored three goals within the of 20 minutes to comeback and obtain a 3-2 advantage.
The Sounders fought hard to hold onto the lead after surviving several close chances before a Galaxy substitute Dejan Jovelijic scored a penalty kick following a hand ball.
Puig himself had a quiet but decent showing for his first night in MLS.
In 28 minutes of action Puig only took one shot that ended up being off target, but more importantly ended the night with 96.2 percent pass accuracy.
'Fans, thank you for all your support,' Puig said afterwards. 'An unfortunate result but we have to keep going. Thank you all.'
The Galaxy currently sit sixth place in the MLS Western Conference with 34 points on a record of 10-4-11, through 25 games played.