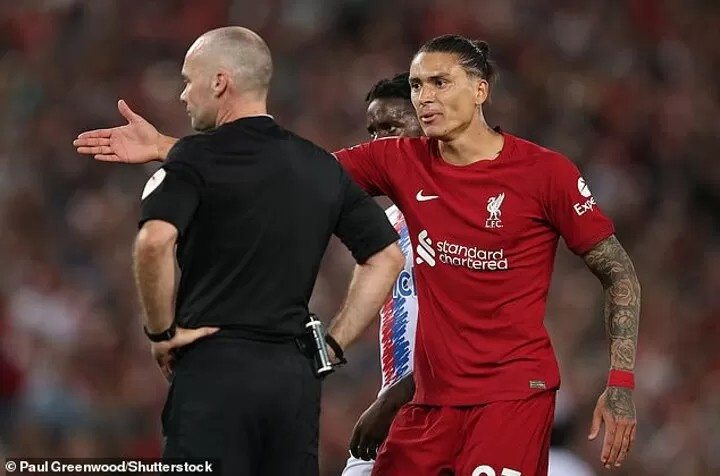 Luis Suarez has urged fellow Uruguayan Darwin Nunez to learn from his mistakes after the Liverpool star was sent off for headbutting Joachim Andersen during the Reds' 1-1 draw with Crystal Palace on Monday.

Explosion Proof Mini Hand Warmer, Lov…
ELON MUSK: BIOGRAPHY, NET WORTH, TWIT…
Fiction Series So Big, They Cross Mul…
THE HIDDEN HILLS OF CADAQUES
14 Best Black Friday Deals on Refrige…
The 35-year-old Nacional forward, who was no stranger to controversy during his three-year spell at Anfield, revealed he had spoken to Nunez to lend some advice after the striker's first Premier League start came to a premature end.
Branding himself an 'idiot', Suarez admitted that he 'suffered' from his mistakes whilst in the Premier League and urged Nunez to bounce back stronger.
'I talked to him because he is just starting out, and I wanted to make him aware that from now on [opponents] will be seeking him out twice or three times more often,' the Uruguayan international said during an interview with Telemundo.
'Even more so in England. He's hearing this from an idiot who made mistakes and suffered for them, but falling down and getting up again made me stronger.
'Don't give them any more chances, it'll only get worse.'
During his time at Liverpool, Suarez was handed an eight-match suspension after the FA found him guilty of racially abusing Manchester United left-back Patrice Evra.
The striker later received a four-month ban for biting Giorgio Chiellini at the World Cup ahead of his blockbuster move to Barcelona in 2014.
On Monday, Nunez's rush of blood was likely a result of Andersen frustrating him for 57 minutes.
The Crystal Palace defender hassled and harried the 23-year-old with strong challenges and physical jostling until he erupted and was sent off.
Considering Diogo Jota and Roberto Firmino were left out against Palace due to injury, Nunez's red card has compounded issues in attack for Jurgen Klopp.
The German coach will now be without his £85million signing for the next three matches against Manchester United, Bournemouth and Newcastle.
But Suarez has insisted that his international team-mate will recover from the red card and hinted that English fans and media were to blame for 'making a big deal' out of the situation.
He said: 'Darwin is someone who listens a lot.
'He is very smart that way and I think he will try to turn this situation around.
'It's not a big deal, we have all made mistakes, we have all been sent off.
'The problem is that he's only just arrived over there and in England, to put it lightly, they make a big deal out of everything.'
Suarez and Nunez are set to team up at the Qatar World Cup in November, where Uruguay will face Portugal, Ghana and South Korea in the group stage.