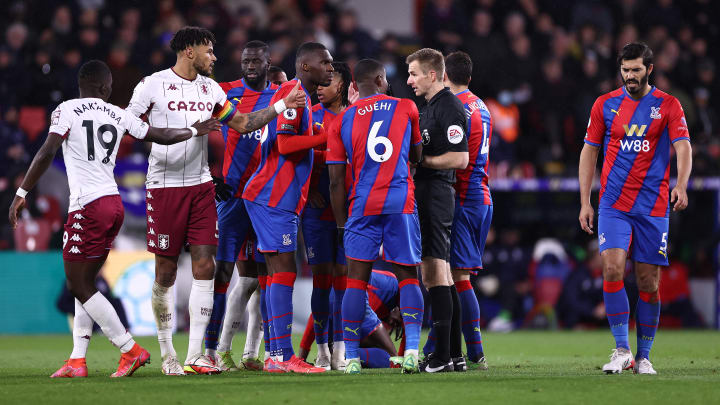 Crystal Palace vs Aston Villa Live Preview and Prediction
The Premier League fixture at Selhurst Park on Saturday sees home team Crystal Palace go up against opponents Aston Villa.
Stream this Game live here
Crystal Palace WDLWLD ⚖
Crystal Palace enter this match following a 1-1 Premier League draw against Liverpool.
In that game, Crystal Palace managed 27% possession and 7 shots on goal with 3 on target. The scorer for Crystal Palace was Wilfried Zaha (32'). Liverpool had 24 attempts on goal with 4 of them on target. Luis Díaz (61') scored for Liverpool.
Fewer than three goals per match were seen in 5 of the past 6 meetings where Crystal Palace have taken part. Regarding the goal attribution during this period, opposition teams scored a total of 7 while Crystal Palace got themselves 6. While that may be of interest, we must now wait to see whether such a trend will be maintained in this next match.
Coming into this meeting, Crystal Palace have not emerged victorious against Aston Villa in their last 2 league matches.
Aston Villa LDDLLW
Aston Villa will go into this match following a 2-1 Premier League win vs Everton in their previous fixture.
In that match, Aston Villa managed 58% possession and 12 shots on goal with 4 of them on target. For Aston Villa, goals were scored by Danny Ings (31'), Emiliano Buendía (86') and Lucas Digne (87' Own goal). On the other side, Everton got 15 shots at goal with 4 on target.
Aston Villa have had no problems opening up opposition defences leading up to this encounter, scoring 7 times in their last 6 matches. While their manager Steven Gerrard will no doubt take that as a positive sign, Aston Villa have been somewhat leaky at the back, having also been scored against in 6 of those same clashes.
Ahead of this clash, Aston Villa have not won away from home in their last 2 league games.
↔️ Head to head
An examination of their most recent head to head meetings going back to 31/08/2019 shows that Crystal Palace have won 2 of these and Aston Villa 3, with the number of drawn results standing at 1.
16 goals were scored between the two sides throughout the course of those matches, with 6 from The Eagles and 10 being from The Villans. The average number of goals per game works out to 2.67.
📋 Team News: Crystal Palace
There aren’t many personnel worries, with just the sole fitness concern for the Crystal Palace gaffer Patrick Vieira to be concerned with from an otherwise fully-primed squad. Nathan Ferguson (Achilles tendon problems) won’t play.
We are thinking that The Eagles will possibly go for a 4-2-3-1 system for this one and select Vicente Guaita, Nathaniel Clyne, Joachim Andersen, Marc Guehi, Tyrick Mitchell, Jeffrey Schlupp, Cheick Doucouré, Jordan Ayew, Eberechi Eze, Wilfried Zaha and Odsonne Edouard.
📰 Team News: Aston Villa
Aston Villa boss Steven Gerrard has to choose from a squad that has some fitness concerns. Diego Carlos (Achilles tendon rupture) and Jed Steer (Achilles tendon problems) will not be playing here.
It’s our belief that The Villans appear most likely to utilise a 4-3-3 lineup by sending out Emiliano Martinez, Ezri Konsa, Calum Chambers, Tyrone Mings, Lucas Digne, John McGinn, Boubacar Kamara, Jacob Ramsey, Ollie Watkins, Danny Ings and Emiliano Buendia.
🧠 Prediction
We’re thinking that Aston Villa and Crystal Palace should both be able to find the back of the net here although it’s difficult to select a clear winner.
There should be little in it, and a draw looks to be quite a realistic result. That’s why our selection here is for a very close game with a 1-1 draw after 90 minutes.