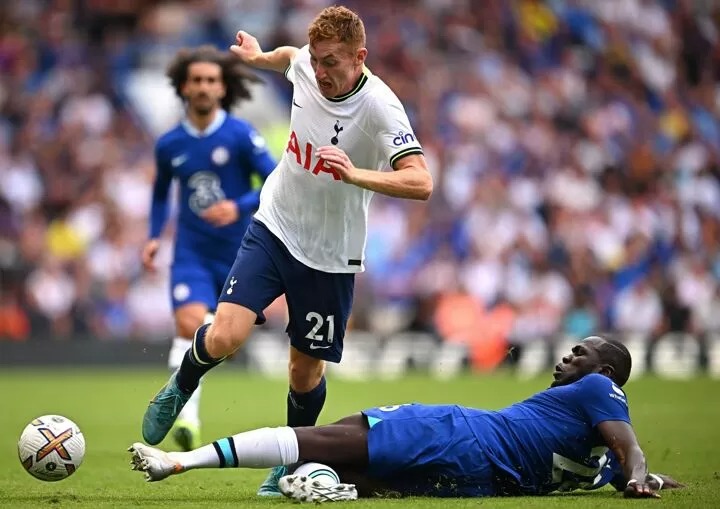 Chelsea and Tottenham Hotspur played out an entertaining 2-2 draw in the Premier League at Stamford Bridge on Sunday. Goals from Kalidou Koulibaly, Pierre-Emile Hojbjerg, Reece James and Harry Kane saw the two teams split points in the London derby.

New Music: 38 Spesh & Harry Fraud Ft …
How to breed blue Oscar fish
Felo Le Tee Ft Harry Styles – As It W…
What was the first television series …
Emma Watson Radiates Glamour in a She…
The hosts took the lead in the 19th minute when Koulibaly volleyed home from Marc Cucurella’s corner. Spurs equalised in the 68th minute through Hojbjerg after Jorginho lost possession while trying to play out from the back.
James restored the Blues’ lead with a side-footed effort in the 77th minute. However, Kane rose high deep into stoppage time to head home from a corner with almost the final touch of the game.
On that note, here are the five talking points from the Chelsea-Spurs game:
#1 Ruben Loftus-Cheek is playing his way into Thomas Tuchel and Gareth Southgate’s plans
Chelsea have spent the last two summers trying to add a right-back to their squad to give Reece James some competition. While that hasn’t materialised, Thomas Tuchel might have found a solution in Ruben Loftus-Cheek.
The Englishman was almost impeccable playing as a right-wing-back against a hard-pressing team. He made the right runs, used his physicality to keep possession and nullified Spurs’ attacking threat down the left wing.
If Chelsea fail to add another defender to the squad this month, Loftus-Cheek’s presence should allow Tuchel to use James as a centre-back knowing that the 26-year-old midfielder works well as a wing-back.
If he continues to deliver, Loftus-Cheek might also force Gareth Southgate to consider including him in England’s World Cup squad for Qatar later this year.
#2 Harry Kane remains Spurs’ most creative player
Harry Kane is more than a traditional striker. He regularly drops deep to get to the ball and creates chances for those around him, with Son Heung-min benefiting the most over the years. However, there’s no one beyond the Spurs captain who can create chances in Antonio Conte’s team.
James man-marked Son for most of the game, while Kane was starved of possession. With Kane already carrying the goal-scoring burden, Conte should bring in a midfielder to allow Kane to thrive in the final third without playmaking duties.
#3 Questionable refereeing mars entertaining clash
Chelsea and Tottenham have always served up entertaining clashes, and it was no different this time.
The tactical battle between the coaches played out well on the pitch. The players were extra motivated to get their team over the line, and for the most part, the fixture delivered.
The refereeing, though, was questionable at several points. An experienced referee like Anthony Taylor got quite a few calls wrong.
While the introduction of the Video Assistant Referee (VAR) was expected to help give the referees a chance to correct their mistakes or have a second look at incidents they might have missed, that system also went missing. Unless communication between the on-field referee and VAR officials is made public, fans will continue to be left in the dark.
#4 Lack of concentration costs Chelsea
Both Tottenham goals came from Chelsea losing concentration at the right time.
After hassling and hurrying Spurs from the first minute, they switched off to allow Spurs to equalize twice and take home a point they barely deserved. Tichel will be furious with the draw, as his team dominated large swathes.
#5 Antonio Conte needs backup to Harry Kane and Son Heung-min
Tottenham laid down an early marker on the opening weekend of the Premier League by schooling Southampton FC.
However, Tuchel showed at Stamford Bridge that Spurs’ attack could be nullified if their players are pressed across the pitch, and Harry Kane and Son Heung-min are starved of possession.
Apart from the duo, there isn’t a Spurs player who can take a game by the scruff of its neck and change the team’s fortunes. Considering the competition to finish in the top four and European and domestic cup challenges, Conte needs to reduce the overreliance on Kane and Son.