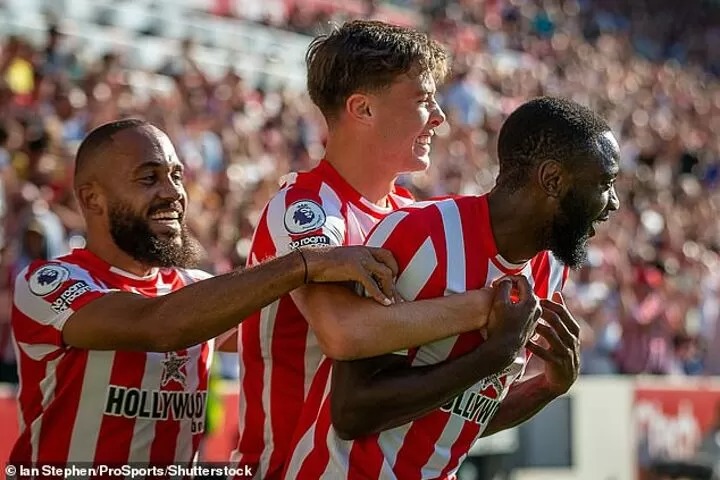 Manchester United's disastrous defeat against Brentford was far from a one-off.
The Red Devils have suffered a number of calamitous results since Sir Alex Ferguson Retired in 2013 to bring the club's golden era to an end, and the 4-0 loss at Brentford was just the latest setback for United.

Money Beliefs That’re Holding Your Bu…
high protein foods for muscle buildin…
High Paying Jobs ($100,000+ /yr) With…
Personal Wing Girl
WHY THE DALAI LAMA HAS AN ENGLISH ACC…
Sportsmail takes a look back at 10 shambolic results for United since Ferguson walked away from Old Trafford nine years ago.
Man City 4 Man Utd 1 - September 22, 2013
After the jubilation of seizing the title back from Manchester City in Sir Alex Ferguson’s final season, David Moyes’s first derby saw United go four goals down in the first 50 minutes.
The match highlighted the painful reality that the balance of power would be swinging back towards the blue half of town for the best part of a decade.
Olympiacos 2 Man Utd 0 - February 25, 2014
Former United chief Ed Woodward took a photo of the scoreboard in Greece from this Champions League last-16 first-leg clash as a reminder of United seeming to hit rock bottom.
This embarrassing defeat was the beginning of the end for Moyes and he was sacked two months later, even though United turned the tie around in the second leg.
MK Dons 4 Man Utd 0 - August 26, 2014
Louis van Gaal’s decision to put out a weakened team backfired spectacularly. United were hammered by a League One club who had only existed for 10 years.
Midtjylland 2 Man Utd 1 - February 18, 2016
Time was already running out for Van Gaal when United were embarrassed in front of less than 10,000 fans by a Midtjylland team playing for the first time in more than two months after a mid-winter break in Denmark.
United recovered to win this Europa League tie, but the Dutchman was sacked at the end of the season despite winning the FA Cup.
Chelsea 4 Man Utd 0 - October 23, 2016
United’s capitulation was also a personal humiliation for Jose Mourinho as the Special One suffered the heaviest Premier League Defeat of his career on his return to Stamford Bridge.
United were a goal down after 30 seconds and never recovered. At least Mourinho won the Europa League and League Cup that season, the club’s last two pieces of silverware.
Everton 4 Man Utd 0 - April 21, 2019
Ole Gunnar Solskjaer apologised to United fans after the worst result of his short time in charge.
Unfortunately, the Norwegian was just getting going in terms of shocking results. United were totally outplayed at Goodison Park as they suffered a sixth defeat in eight games — a run that coincided with Solskjaer getting the job on a permanent basis.
Man Utd 1 Tottenham 6 - October 4, 2020
Solskjaer endured his ‘worst day ever’ as Mourinho’s Spurs ran riot at an empty Old Trafford to leave United 16th in the Premier League table.
The home side actually led early on but were behind and heading for their joint-heaviest Premier League defeat by the time Anthony Martial was sent off in the 28th minute.
Man Utd 0 Liverpool 5 - October 24, 2021
It was clear Solskjaer’s days were numbered after a brilliant Liverpool team swept into Old Trafford and brutally tore United to shreds.
Four goals down at half-time — and five after 50 minutes — United fans were at one point seriously worried that their bitter rivals were going to reach double figures.
The brilliant Mohamed Salah  became the first Liverpool player since Fred Howe in 1936 to score a hat-trick at Old Trafford.
Watford 4 Man Utd 1 - November 20, 2021
Solskjaer’s last stand. Needing a big performance from his players, the manager was let down again as United folded at Vicarage Road against a Watford team who ended up finishing 19th and being relegated.
Captain Harry Maguire’s sending-off in the second half didn’t help, before two stoppage-time goals sealed Solskjaer’s fate. He was sacked the next day.
Brighton 4 Man Utd 0 - May 7, 2022
Any hope that caretaker boss Ralf Rangnick could rouse this group of players into some semblance of a decent United team had long since disappeared before they arrived on the south coast for the penultimate game of the season.
Four goals down after an hour, United suffered an embarrassing defeat that killed off their chances of Champions League qualification.