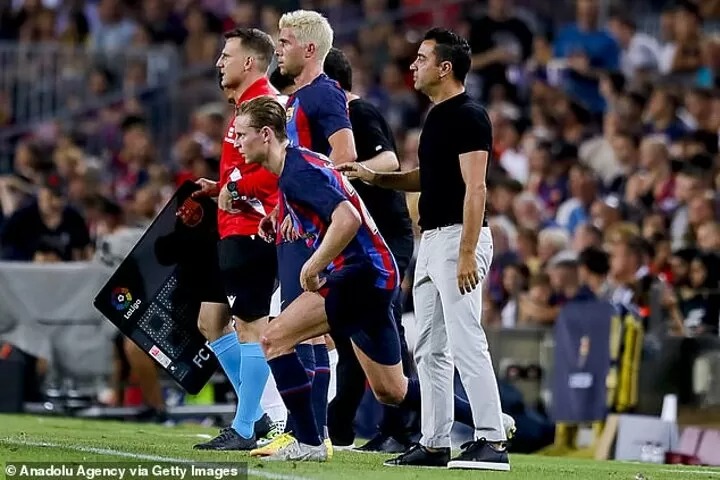 Luis Garcia claimed Frenkie de Jong was Barcelona's best player in an otherwise dreadful 0-0 draw against Rayo Vallecano on Saturday - while Spanish media asked: 'Where has this player been the last three years?'

North Korea says missile tests are pr…
Xavi reveals reasons behind experimen…
Manchester United made the Holland midfielder their No 1 target in the transfer window this summer while Chelsea is also interested in a move.
Barcelona wants to offload the 25-year-old to balance the books and have enough room in its budget to register new defender Jules Kounde but De Jong appears to want to stay.
He was a 60th minute substitute by coach Xavi against Vallecano on Saturday night and Garcia saw a player fighting for his future.
'The best one (on the pitch),' Garcia said as part of his ESPN punditry at the Nou Camp.
'I think he showed today, he wanted to stay, "listen, I'm here, I wanted to do something, look what I can bring [to] the table".
'He definitely was one of the best players in the second half.’
De Jong received a warm round of applause from Barcelona fans as he came on in the second half - a gesture that Spanish publication Marca said meant the supporters 'want to continue seeing him as a Barca player.'
And Barcelona-based publication Mundo Deportivo agreed, albeit writing with a little bit more scrutiny in an editorial about De Jong.
'If Frenkie de Jong ends up leaving for Manchester United or Chelsea in these two remaining weeks of August, one will have to wonder why he did not compete in his first three seasons with the determination he is displaying now,' it said.
'It seems that feeling cornered by the club for financial reasons has freed the best Frenkie de Jong , the one who only saw the light on a few occasions. It's all or nothing for him, he no longer has anything to lose.'
A move to United, however, will only have become less appealing after Erik ten Hag's side were crushed 4-0 by Brentford in the Premier League on Saturday.
United legend Rio Ferdinand slammed his old club for 'begging' De Jong to join when all the signs suggest he doesn't want to go to Old Trafford without Champions League football.
'We're almost wh**ing ourselves out for this player. For three months in the transfer window, with our cap out begging, "please come to us, please come to us."
'They've walked around behind him, begging him (De Jong), "please turn round and notice us, please turn round and notice us." And he's looking around and saying "not for me."
'And we're still there; "please give us one chance." How are we putting ourselves in that position? How are we allowing ourselves to be put in a position like that?
'Do you think Klopp or Pep or Sir Alex or Jose would be following around a player like this? They wouldn't be doing that!'