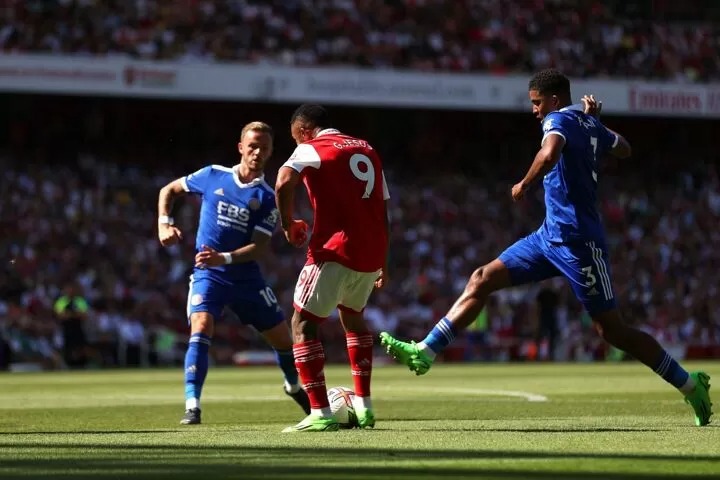 Arsenal are off to a commanding start to their Premier League campaign following back-to-back victories against Crystal Palace and Leicester City. On Matchday 2 of the Premier League, new acquisition Gabriel Jesus netted two first-half goals before Granit Xhaka and Gabriel Martinelli scored one apiece to register an emphatic 4-2 victory over the Foxes at the Emirates.

ADIDAS ORIGINALS AND PHARRELL WILLIAM…
Taiwan Leader Tells China War ‘Absolu…
35 Actors With Beards (Best & Worst C…
5 Portraits of Jesus Christ app
27 Do bible proverbs promise too much…
Wesley Fofana of Leicester would have grabbed an early lead for his side. A rapid counter-attack in the second minute had Arsenal in danger, but Aaron Ramsdale rushed down and made himself big to deny the Frenchman Fofana from silencing the home crowd. It was all Arsenal after that.
Granit Xhaka rattled his shot against the post after his header failed to test the Foxes' goalkeeper. However, his teammate Gabriel Jesus put the game beyond the visitors' reach with two goals, within 12 minutes of each other, in the first half.
Jesus, who is now Arsenal's number 9, produced the first goal with a delicious dink over the entire Leicester City defense and goalkeeper Danny Ward to take the lead in the 23' minute. The Gunners forward doubled the lead after Vardy's poor clearance reached Jesus. The Brazilian headed the ball into an open net.
Leicester had the majority of their possession during the early part of the second half and applied considerable pressure. William Saliba, trying to head the ball away for a corner, diverted the ball into his own net to cut the deficit to one.
Arsenal re-established their two-goal lead thanks to an error from Danny Ward. The shot-stopper tangled with Fofana after failing to get a firm grip on the ball, which kindly dropped to the feet of a grateful Xhaka. The Swiss international swiftly tapped the ball into an empty net.
However, Leicester fought back. Maddison's ferocious strike went between the legs of Ramsdale with 16 minutes left on the clock. Gabriel Martinelli, however, reinstated the Gunners into a strong position with an excellent goal from outside the box to end the game at 4-2.
Let's look at the 5 talking points from the Gunners' second victory of the 2022/23 season.
#5. Samba magic on the frontline
Arsenal remained unaltered on the front line and stuck with Gabriel Jesus, Gabriel Martinelli, and Bukayo Saka. Saka didn't look as threatening as Martinelli. Numerous attacks flowed through the left hand side, with Gabriel Martinelli, Gabriel Jesus, and Granit Xhaka linking-up to wreak havoc on the Leicester City defense.
On top of scoring two goals and assisting two goals, Jesus even had the opportunity to round-off his sumptuous performance with a hat-trick in his first home-game as a Gunner.
Martinelli, on the other hand, worked his socks off to make things happen and scored a good goal from outside the penalty box. Arsenal will be hoping to witness performances like today every week from their samba boys.
#4. James Maddison - The only bright spot in Leicester
James Maddison began the new season on a high by scoring one and assisting one in two games. The English midfielder has not only been the creative force for the Foxes despite not getting enough assistance from his teammates, but he is in the front scoring goals as well.
Against arsenal, Maddison received a pass from Kelechi Iheanacho and slotted it past Aaron Ramsdale from a tight angle.
He completed 31 passes and created one key pass throughout the game. The 25-year-old was also the most fouled player on the pitch and often looked a real threat while breaking away in the counter attack. He didn't receive enough support from other midfielders, including Wilfred Ndidi and Youri Tielemans, and often had to create by himself and feed the attackers.
#3. Partey-Xhaka midfield looked promising
Despite Leicester scoring two, the Arsenal midfielders looked to be at the top of their game and never let Ndidi and Tielemans have a moment of peace. Granit Xhaka was allowed to roam in the advanced positions on the pitch, while Thomas Partey stood put with the defenders and helped them break Leicester's transition.
It wasn't Partey's best game, but the midfield combination is working perfectly for the Gunners. If Arteta manages to keep them fit, their aspirations of qualifying for the Champions League may come true. Fabio Vieira is yet to feature for Arsenal and he could be another exciting option for Arsenal's manager in the middle of the park.
#2. Leicester's squad needs strengthening
Leicester City have not made any significant signings this summer. The Foxes have turned down transfer offers from Chelsea and Newcastle United for Wesley Fofana and James Maddison respectively. Despite the latter looking to stay put by signing a new contract, Fofana has indicated his desire to join Thomas Tuchel at Stamford Bridge.
Manager Brendan Rodgers has confirmed that midfielder Boubakary Soumare has requested to leave the club after struggling to cement his place in the starting XI. Additionally, the likes of Patson Daka and Kelechi Iheanacho have not lived up to expectations. The duo have struggled to replace the aging Vardy, whose game time has gradually reduced. Rodgers is running out of options, but he'll be hoping to keep his core team together to challenge for the European spot.
#1. A much-needed start for Arsenal
Unlike last season, where the Gunners lost their opening 3 games, Arteta has managed to get his side off to a good start with two consecutive wins in as many matches. The Gunners took the lead in both games and eventually managed to win both of the matches by a two-goal margin.
The Gunners will next travel to the Vitality Stadium to face Bournemouth before taking on Fulham in front of the home crowd. A title charge might seem unlikely, but top 4 is definitely on the cards for Arsenal.