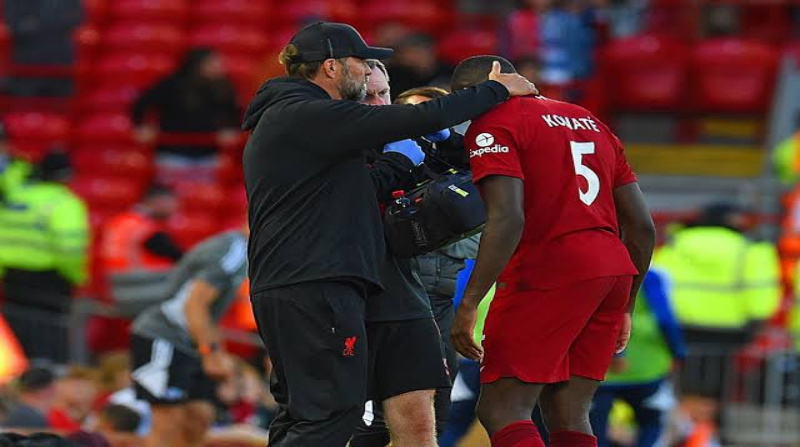 Liverpool will be without star defender Ibrahima Konate ahead of their opening Premier League game against Fulham on Saturday, 6 August.
The French centre-back picked up a knock during the Reds' final pre-season game against Ligue 1 side Strasbourg. This saw him getting substituted in the second half of the game which they went on to lose 3-0.

MRS THATCHER’S DREAM
high protein foods for muscle buildin…
Personal Wing Girl
🔥🔥New Music🔥🔥: Armani Caesar Featurin…
D-Black – Trotro Vibes
Konate confirmed that he will be sitting out the game against Fulham by posting the following message on his Instagram account. He said:
“Unfortunately, I have to spend some time off the pitch but it won’t be too long. In the meantime, I will be doing my best to come back even stronger and supporting the boys.”
Ibrahima Konate arrived at Anfield last summer from Bundesliga outfit RB Leipzig for a fee of around £36 million. The Frenchman had a slow start to his Liverpool career but gradually broke into the first-team. Konate featured in the UEFA Champions League final last season against Real Madrid. Unfortunately, the Reds fell to a 1-0 defeat in Paris on that occasion.
The absence of Ibrahima Konate could see Joel Matip start alongside Virgil van Dijk in defense. The 30-year-old defender started in the FA Community Shield against Manchester City last week, which Liverpool went on to win 3-1.
Joe Gomez is another possible option at Jurgen Klopp's disposal. The England defender penned a new five-year contract in the summer and has also been given a new squad number ahead of the new season. Gomez played the full 90 minutes in the Reds' 3-0 defeat to Strasbourg.