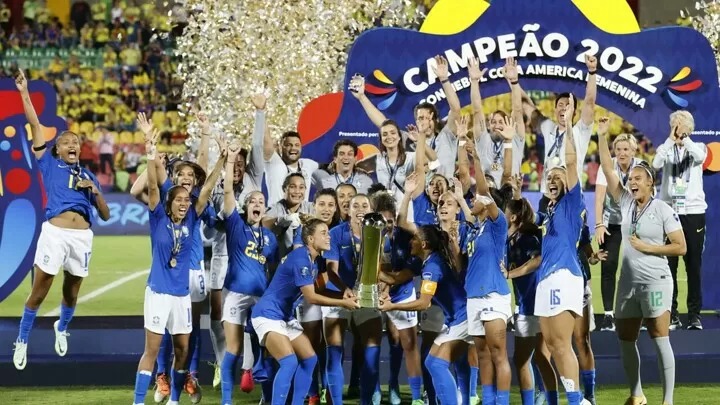 A penalty goal gave Brazil its eighth Copa América Femenina title after beating Colombia. The match pitted two teams against each other that reached the final undefeated, but the ‘Canarinha’ showed why they were the favorites by defeating the locals in the Colombian city of Bucaramanga.

One ton of cocaine found hidden in ca…
Bolsonaro speeds up payments to the p…
The HashBox ecosystem has set sail in…
Potassium Bromate
3 reasons why Casemiro is a smart sig…
An image that repeats itself. Brazil wins the Copa América Femenina trophy, the eighth of its record. The ‘Canarinha’ defeated Colombia 1 – 0 in a close match, in which Colombian errors determined the outcome of the match.
The first goal came in the 39th minute, from the penalty spot. Forward Debinha shot to the right post after a foul committed by Colombian Manuela Vanegas.
The goal silenced the Alfonso López stadium in Bucaramanga, in northeastern Colombia, which had been painted yellow by the tricolor fans.
The duel faced two teams that had reached the final of the tournament undefeated and had shown their footballing quality in the group stage and in the semifinals. Ball control was divided between both teams: ‘Canarinha’ had 57% possession while Tricolor had 43%.
However, Brazil showed why they gave it as a favourite. He finished the tournament without losing a game, scored 20 goals and Lorena Leite’s goal ended in zero.
The two teams will meet at the 2023 World Cup and the 2024 Olympics, with Brazil facing the winner of the match between Germany and England in the Women’s Euro Cup final.


This post first appeared on E360hubs, please read the originial post: here
People also like
One ton of cocaine found hidden in cat litter in Brazil
Bolsonaro speeds up payments to the poor as election looms
The HashBox ecosystem has set sail in an all-round way, empowering the chain to guess the World Cup
Potassium Bromate
3 reasons why Casemiro is a smart signing for Manchester United
Crosswords with Friends August 16 2022 Answers