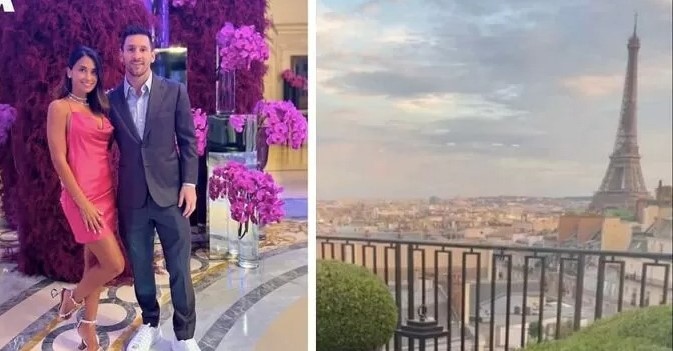 Paris Saint-Germain (PSG) forward Lionel Messi along with his partner Antonella Roccuzzo enjoyed a break in Paris before the start of the new season. Messi has just returned to France after the Parisians' pre-season tour of Japan.

Junya Watanabe MAN
The Russia-Ukraine Conflict’s Impact …
Beintraining
Costa Titch – Mr Big Flexa (Tracklist…
Costa Titch – Mr Big Flexa EP (Trackl…
The duo enjoyed their stay at Four Seasons, a five-star hotel. According to the Daily Star, the penthouse suite where the couple stayed could cost around £7000 per night.
The Four Seasons hotel is one of the most luxurious places in Paris, as it has many Michelin star restaurants, a lush swimming pool and spa. There are also various amenities in their rooms.
According to the aforementioned source, Messi's room included a bottle of champagne, a powder room, conservatory and a 360 degree view of the city of Paris. The Four Seasons hotel is situated in the heart of Paris and is not far away from PSG's home, Parc Des Princes, and is also quite close to the iconic Eiffel Tower.
Roccuzzo posted a picture with Messi in the lavish hotel, with the caption "with my" followed by a heart emoji. The Instagram image can be seen below:
How did Lionel Messi perform on PSG's pre-season tour?
PSG played three games in Japan as part of their pre-season tour, winning all three. Lionel Messi had a great outing in Japan, with the seven-time Ballon d'Or winner scoring twice.
Messi scored the opener in PSG's 2-1 win over Kawasaki Frontale in the first warm-up game. The 35-year-old went goalless against Urawa Red Diamonds in the next game, which the Parisians won 3-0.
Messi's best performance in pre-season came in their 6-2 win over Gamba Osaka, bagging a goal and an assist. He was one of the Parisian giants' best players on the night.
Messi has entered the final year of his contract with the Ligue 1 giants. The Argentina captain will look to have a much better season than his debut outing at the Parc des Princes, where he managed just 11 strikes and 15 assists across competitions. He netted just six times in Ligue 1, which the Parisians won.