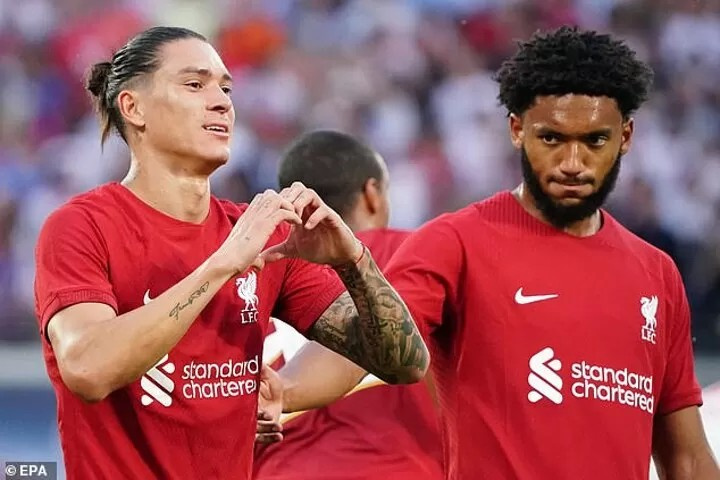 Liverpool won their latest pre-season friendly this evening in a 5-0 trouncing of Bundesliga side RB Leipzig.
New signing Darwin Nunez scored four second-half goals to get himself off the mark in Liverpool colours and stamp his arrival at the Reds after Mo Salah had opened the scoring as Jurgen Klopp's side continued to prepare for another gruelling season.

how to remove dark circles in 2 days
Tips to make your journaling easier
This Is What You Should Do If You’re …
MRS THATCHER’S DREAM
Dog Pet Automatic Interactive Ball La…
We assess the performances of each of the Liverpool players on what was a successful evening for last season's Premier League runners up.
STARTING XI:
Adrian: Hardly touched the Ball until the end of the first half when he had to produce a good save with his legs from Christopher Nkunku. Had a screamer from Angelino covered and didn't put a foot wrong. 7
Trent Alexander-Arnold: Drove forward when he could as usual and almost found Salah early as he continued to demonstrate a good understanding with the Egyptian. Showed good pace to get back and stop a dangerous counter attack and won the ball pressing up the pitch towards the end of the half. 7.5
Ibrahima Konate: Covered well for Alexander-Arnold when his full-back progressed and was allowed the chance to show what he could do with the ball at his feet - a test he passed. Flew into challenges against his old side - on occasion unsuccessfully - and nearly gave a goal away when Christian Nukuku got the better of him. 5
Virgil van Dijk: Played an incredible over-the-top pass to put Salah through for what should have been Liverpool's second goal and marshalled the Reds defence well. Continues to make things look so easy. 7
Andy Robertson: An early low cross towards Firmino reminded us all what he can do, and he regularly found himself in positive attacking positions. Left gaps defensively but we know that will happen with the way Liverpool play - broke up Leipzig's most threatening attack. 7.5
Fabinho: Solid if not spectacular, he continues to protect the Liverpool back line but was also eager to get forward when he could. Luckily won a foul when it seemed Leipzig were in. 6
Naby Keita: Tried to support the attack when he could but was largely anonymous. Played a clever ball into Robertson late on in the first half but seemed frustrated. 5
Thiago: His usual creative, clever self. Found plenty of space between the lines and chipped in with one shot that probably left the stadium. His fitness is imperative to Liverpool's success. 7.5 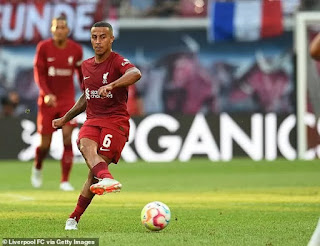 Mo Salah: Seems to be enjoying life after signing his new contract earlier this summer. Made the opening goal look easy and showed good persistence to win the ball from Willi Orban to set things up. Should have scored a second soon after but made the angle difficult for himself. Kept trying to cut in onto his favoured left foot, which teams still need to be wary of. 8
Luis Diaz: Tracked back well but was too slow on the ball at times. Needs to try and be a little less clever in possession and should sometimes take an easier option. Won a foul high up when pressing, so has no issues buying into that side of Jurgen Klopp's philosophy. 6.5
Roberto Firmino: Ran the game in the first half, showing good movement off the ball but also leading the press from the front. Showed selflessness to link up with Salah for the first goal when he could have shot himself, and almost did get on the scoresheet when reaching for a mis-kicked shot from Robertson. A reminder that he's still around after a quiet season last year. 8.5
SUBSTITUTES
Harvey Davies: Didn't have a save to make but was alert when he had to be. 6
James Milner: Continues to do the jobs he probably doesn't want to do as he winds down his career, playing right-back here again to give Alexander-Arnold a rest. Crossed well for Nunez late on. 6.5
Joel Matip: Organised the defence for most of the second half but wasn't tested at all by a disappointing Leipzig side. 6
Joe Gomez: Slotted into the back line in the second period but had nothing to do defensively. Keeps trying to score but saw an effort fly high and wide. 6
Kostas Tsimikas: Continued on from where Robertson left off in the first period. Hit the byline as much as possible and looked for the head of Nunez when he could. Picked out Elliott with a fantastic delivery. 7
Jordan Henderson: Always looked to be positive with the ball at his feet and should have had an assist after a great cross for Carvalho. Was the first to congratulate Nunez on his first goal. 6.5
Harvey Elliott: Should have scored with a header from Tsimikas' cross but showed good vision to pick out Nunez for his hat-trick. 7
Curtis Jones: Looked to drive the ball forward at every opportunity. A real chance for the academy graduate to finally kick on if Liverpool aren't to sign another midfielder. 6.5
Fabio Carvalho: Missed a good chance to score a header from Henderson's cross, though heading is not his strength. Looked to come inside from deep when he could. Drove forward well late on before crossing across goal and out of play, but set up the fifth. 7
Stefan Bajcetic: The 17-year-old looks to have a sound understanding of Klopp's off-the-ball philosophy, winning the ball high up before playing in Elliott to cross for the fourth. 7
Darwin Nunez: Looked relieved to have scored his first goal for Liverpool after almost seeing his penalty saved but didn't look back after that and secured a fine hat-trick. Took his second very well to show how clinical he can be before poking in a third and slotting home a fourth. On another day it could have been six - welcome to Liverpool. 9.5


This post first appeared on E360hubs, please read the originial post: here
People also like
how to remove dark circles in 2 days
Tips to make your journaling easier
This Is What You Should Do If You’re Laid Off
MRS THATCHER’S DREAM
Dog Pet Automatic Interactive Ball Launcher