Brazilian jiu jitsu what is it

In this BJJ article we propose an awesome information about: Brazilian jiujitsu origin, history, style of fighting, belts, etc.

Master Mitsuyo Maeda moved from Japan to Brazil, in the last days of the 19th century. And, he has inaugurated the beginning of the Brazilian Jiu Jitsu martial art, and that was in 1915.

After, the meeting master Mitsuyo Maeda and the Gracie family. They were aimed to learn jiu jitsu martial art especially Carlos Gracie. So, at fifteen years old Carlos Gracie starts to learn the basics of Brazilian jiu jitsu. And, when he was nineteen, he moved to Rio de Janeiro –Brazil– and he inaugurates a new school for teaching jujitsu.

Carlos Gracie had found that jiu-jitsu is very efficacy and efficient martial art, where he could conquer opponents physically stronger. From here starts the jiu jitsu promoting with the famous saying “a smaller, weaker BJJ practitioner can successfully defeat a much bigger, stronger opponent by using leverage and proper BJJ techniques”

“Brazilian Jiu-Jitsu defines the natural defense of a weak person against a strong one. it’s a kind of leveling process through which brute force, confronted and dominated by the wise application of rational mechanics, is led to admitting that the person , usually taken as a body endowed with a soul, should actually be deemed a soul that happens to reside during a body” said by master Carlos Gracie.

Therefore, Brazilian jiujitsu (BJJ) is a martial arts based on ground fighting. As a practitioner, you’ll discover that BJJ is a variation of multiple martial arts like Judo, wrestling, etc.

Otherwise, the jiu jitsu fighter starts the fight from a standing position, and he can process a takedown to lead his opponent to the ground by utilizing superior leverage, grip upon your opponent.

After that, he can win the fight by controlling his opponent in ways in which force him to submit or scoring more points by leading him in a specific Brazilian jiu jitsu positions. In both cases, the jiu-jitsu fighter should use the proper BJJ technique.

As a BJJ student, you learn how to control and overcome greater size, and an aggressive opponent with less strength merged with the utilization of superior leverage, grip, and position upon your opponent.  Thus, the jiu-jitsu practitioners gain a deep understanding on the limits of their physical bodies.

There are two styles of the Brazilian jiu jitsu:

Brazilian JiuJitsu students enjoy practicing this beautiful martial art. Besides, BJJ has plenty of benefits to offer them such as: 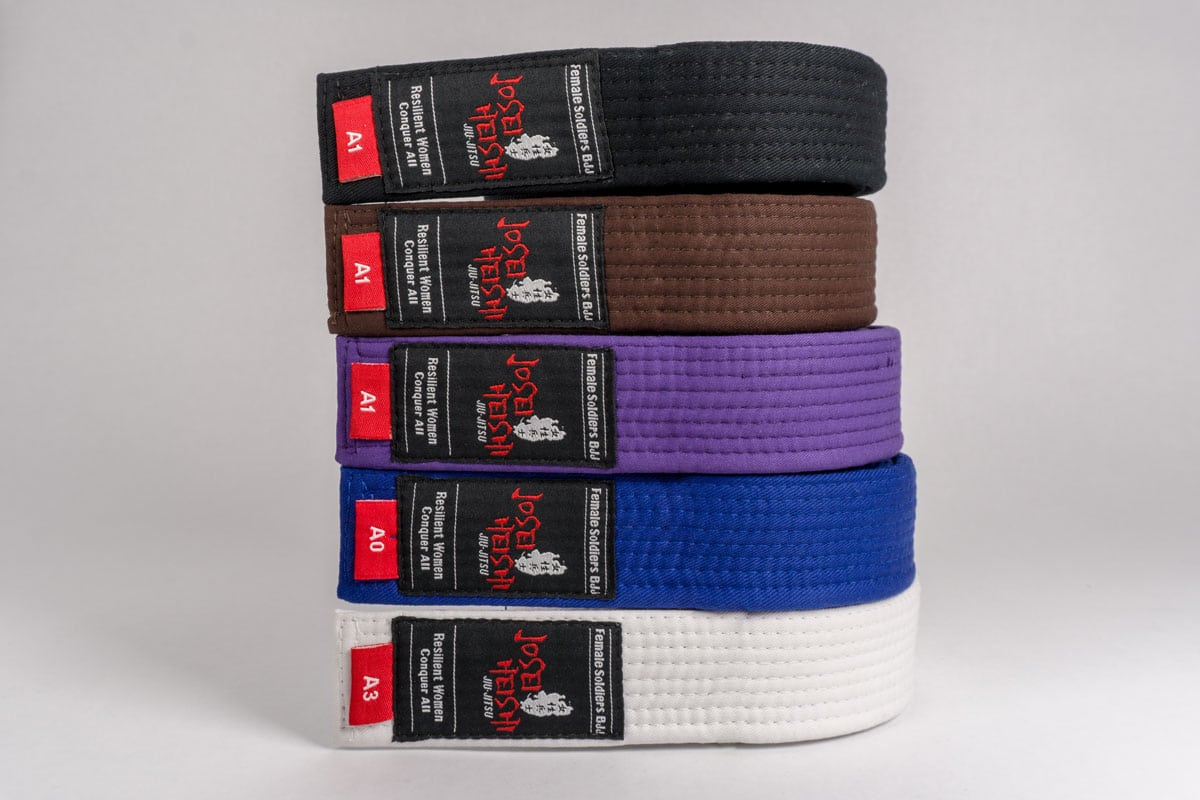 A jiu jitsu white belt stays in this level for at least 2 years. It depends on his progress training Brazilian jiu jitsu.

The blue belt is the next promotion rank for a white belt.  The Blue belt BJJ practitioner has developed more knowledge about Brazilian jiu-jitsu techniques and submissions.

A blue belt stays in this jiu jitsu level between 2 to 3 years.

The purple belt attests a BJJ fighter who passes a minimum of four to 5 years of jiu jitsu practice and study. So, he is very savage in some BJJ positions.

A purple belt stays in this BJJ level between 2 to 3 years.

The brown belt is the next belt promotion for a purple belt. It defines a student with a minimum of six years of jiu jitsu practice and study.

A brown belt stays in this Brazilian jiu-jitsu level between 1 to 2 years.

The jiu jitsu black belt is the belt after the brown belt.

The black belt achieves this most desired BJJ rank in around eight to ten years.

There are other belts in Brazilian jiu jitsu high ranked than the black belt such as Red / Black belt, Red / White belt, and the Red belt.

Children between 4 and 15 years old can receive belt colors that reward progress after a white belt but before earning a blue belt. Which may only be awarded to people 16 years or older.

There are dozens of Brazilian jiu jitsu submissions. And all lead a BJJ opponent to tap out. Here are some BJJ submissions:

Sure Brazilian jiu-jitsu has many masters that had participated in the progression of this beautiful martial art discipline like:

A BJJ practitioner takes the full guard if his legs are closed around the waist of his opponent.

The mount position means you’ll sit on the belly or chest of your opponent together with your legs at the edges of his body.

Brazilian jiu-jitsu is one of the best martial arts everyone should learn. So, when you plan to start BJJ training.

Feel free to share with us your view of Brazilian jiu jitsu martial art.

The post Brazilian jiu jitsu what is it appeared first on Jiujitsu News.

Brazilian jiu jitsu what is it