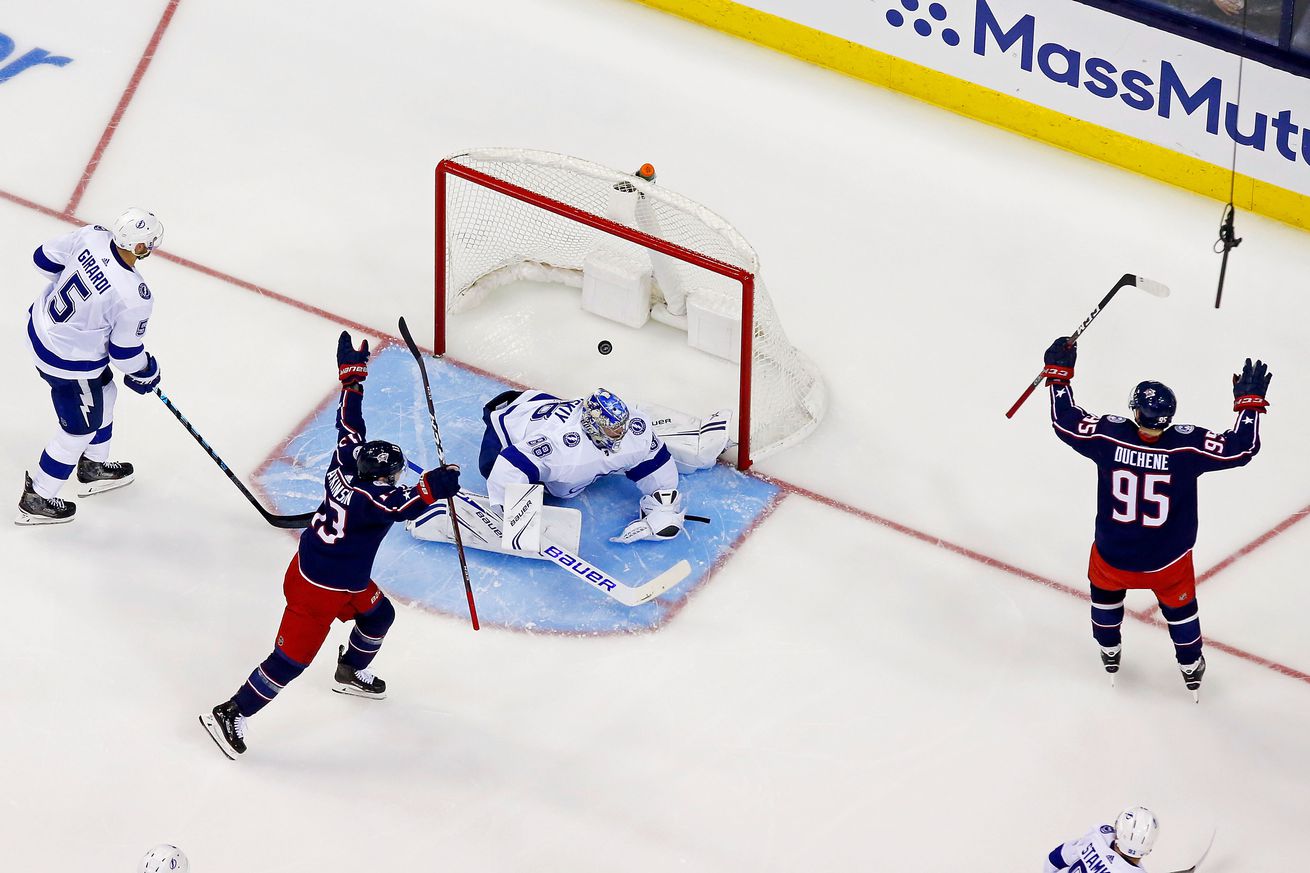 Tampa on the verge of a historic collapse, Penguins on life support, Jets battle back and Mark Stone has himself a night.

Two potential sweeps are set for Tuesday night thanks to Columbus and the New York Islanders winning Game 3 of their respective matches. Lots happened yesterday, so let’s get at it!

It’s becoming apparent that the window on the Pittsburgh Penguins being a perennial Stanley Cup threat is closing. I don’t think anyone saw it slamming shut on their fingers the way it is, though. I mean, I am sure there’s going to be wholesale denials about it. There will be much said about how the Islanders “just got lucky” with all the goals they’ve pumped past Matt Murray. Injuries will be discussed. They’ll say a couple bounces and they’re the ones with the 3-0 Lead. It’s all lies. The Islanders have been the far better team here, and the fact that it comes with the bonus Oilers schadenfreude of Jordan Eberle turning into a playoff beast in his first opportunity? Even better. I fully expect them to close out the series Tuesday against Pittsburgh. The Penguins have been Gudbranson’d, and you gotta take drastic steps to recover from that.

If I sound a little excited at the prospect of Tampa getting swept, there’s a good reason for that. It’s not just because getting to watch history in the making appeals to the nerd in me, and it would definitely be one for the ages. But it’s also because Tampa losing would officially make it the worst first round collapse of all time, taking that odious distinction away from... the Vancouver Canucks. Yes, the 2012 loss to the Los Angeles Kings in 5 games was the biggest collapse in recent memory, and gets the edge over the Oilers 2006 dismantling of the Detroit Red Wings because the Canucks managed a single victory in that one. And while that was a good season that the Canucks had coming off that Stanley Cup run, that LA team was not your typical 8th seed, and you certainly can’t compare the 2012 Canucks to this season’s Lightning. It’s not even close. I see nothing at all that indicates this team can come back. They’re playing like they’ve already lost, and seem to have forgotten the mantra of the 2004 Stanley Cup Champion Tampa Bay Lightning: Safe is death (s/t @jaredbook of @HabsEOTP). Who said that? Oh, right. It was the coach. John Tortorella.

The Winnipeg Jets team we’re more used to seeing finally reared its head last night, taking home ice advantage from the Blues in a rather convincing fashion. Every time St Louis looked like they were going to try and mount a comeback, the Jets stomped it out. The key to this win was getting some help from the the guys not named Mark Scheifele, Patrik Laine and Blake Wheeler. 2 goals from Kyle Connor, and singles from Brandon Tanev, Kevin Hayes, Dustin Byfuglien and Laine paced them to the victory, as they showed that Don Cherry’s favorite goalie looked more like the AHL’er he’s destined to become.

After their game 1 win, it looked like we were in for a long battle between these two teams, but unless Aaron Dell can somehow salvage this series it’s gonna be over this week. Mark Stone continues to make Ottawa GM Pierre Dorion puff his chest out with pride as he fired a hat trick for the home crowd en route to a 6-3 win and 2-1 series lead. And if the Sharks weren’t already in trouble, they could lose Joe Thornton if DoPS does the right thing and suspends him for this bullshit headshot.

Fleury was ready to fight him for this one. Didn’t happen. pic.twitter.com/eJIpqi78mY

What an absolute garbage hit by Thornton, and what the hell are the refs thinking not tossing him from the game there? That hit came after Paul Stastny’s 2nd goal of the night, which gave Vegas a 4-1 lead. I’m sure that had nothing to do with it. Game 4 goes Tuesday night in Vegas.