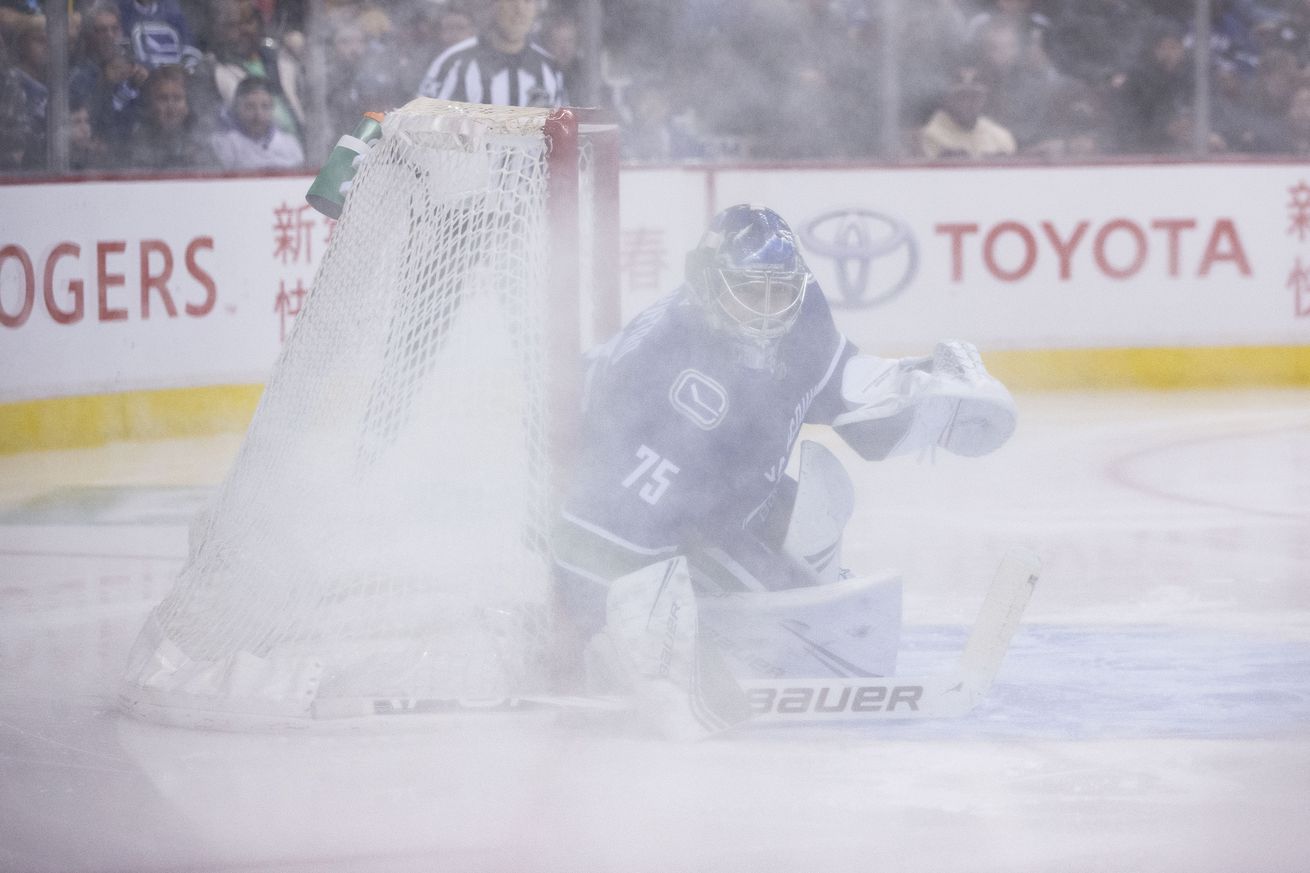 So excited to see the new kids start. Just skip a couple periods and as usual, a couple Nucks D.

Nope. In the new desert hockey NHL, snow is what is used only in the executive suite. So... with the wet coast getting the frozen finger from the Arctic front, the Faeries put the freeze on Marky during the warmup. Although... Marky’s ‘issue’ was noticed by Green in morning practice.

With Demko already on the Faery Farm Reserve, it means the first NHL start for Mike.

#Canucks confirm DiPietro to start in goal vs SJ. Originally a planned start for Markstrom, the change is a precaution due to tightness in his lower body and extends his maintenance and recovery period between starts. Markstrom will not be available to play tonight’s game. pic.twitter.com/4hGlLaMg8f

Also out for this game and the Cali road trip was Sutter - joined the Faeries with the reservists.

You’d think with a teenager playing his first NHL game against one of the best in the West, the Nucks in front of him would play hard and not hang him out to dry.

Or...they could perform the ritual goalie hazing as unwritten in the ‘code’.

And on Mike’s first NHL shot, it was his first unsave. Thanks to Guddy and the puck-gazers. Not a weak goal. Weak Nucks play behind the net, sure.

However, it’s not just MDP outmatched by the Sharks, so are the Nucks.

Will spare you, me, MDP and the ‘defenders’ the indignity of in-period vids of Shark goals. There’s so many anyhow, might break the internet on a school night.

The next goal was a lofty shot of comedic hands. High shot comes in, Hutton tries to glove it, instead tips it. Mike tries to juggle it blocker side, but Hutton’s tip evades him and it’s 2-0 Sharks - after 3 minutes. Ugh.

Not a fun start for MDP. Worse, shots are 8-0 Sharks in the first 12 mins. The Nucks can’t keep up with the speed, passing, power, fishy mojo of teal.

The 3rd Sharks goal came off a tip from a shot from Burns - after a failed Nucks clear. Not their first or last failed clear of the game.

It’s 3-0 Sharks. The whinging in the game thread could be heard all the way from the tropics. Not fair to MDP (Hint: he’s not quite ready for the NHL just yet).

It’s the bad beginning of a snow blowout.

Just 7 minutes left in the period when the Nucks had their first shot on Jones. Who was able to make the stop, despite little to no action in his end for a very long time.

But, with just 7 seconds left in the period, our other rookie, Pete, cruises into the Shark zone and stares down all the Sharks. Takes his time. Picks his place. His place is a perfect no-looking pass onto Bo’s lurking stick. It’s a Nucks goal. Yay!

We can take the Shark slaughter on the scoreboard. One sweet Pete play is worth at least 3 goals against.

After the Sharks got bored of shooting practice, the Nucks made up the shot count so the period ended 10-9 for the Sharks.

Just have to make up 2 goals in the 2nd to get the game back to the tie zone.

Remember the 2nd period against Calgary the other night? Don’t think about it. Repressed traumatic memories can be tricky. Especially when they’re fresh.

And worse when they’re seen again. The Sharks, like Cowtown, outplayed the Nucks. While the Nucks outshot the Sharks 13-5, the Sharks outscored the Nucks 3-0 in the period. 5 high quality chances are better the a dozen of the lower grade.

Sure, there were a couple goals MDP woulda/shoulda/coulda had, but the Sharks don’t care. The brutes - taking advantage of a junior goalie in a pro league.

Speaking of a pro league, the Nucks enjoy records. And helping old and slow players achieve them.

Big Joe breaks left-side Tanev, breaks out of his zone, lugs the puck up the ice in slow Joe mode. Gets into the Nucks zone before the period ends or Nucks defenders can arrive, makes a pass to Labanc for the goal. Joe just passed Howe on the all-time assist list. Congrats, Big Joe.

What matters when you’re down 6-1 in your first NHL start, is how you bounce back.

And MDP does. Holds the fort. Makes some key saves. He’s into the game now. Even stopped Kane’s sure hattie shot late in the game.

Just needs some run support. Or as we call it in the game thread, rum-support.

While we were getting well-supported, our newest Nucks rookie, Zak MacEwen caused some havoc around the Shark net, retrieved the puck from his own shot attempt and sent a pass to... Pouliot. Who scores!

Not making it up. A brief moment of redemption for Poolie - only needs another 25 of those to break even.

And that’s the way the game ended. 6-2 for the teal fish team.

Until late in the period when Little Joe tipped a puck past MDP.

Was it fair that MDP had his first start against the best team in the West? No. But, as they say in the accounting office, Mike is on the NHL payroll now, so that offers better compensation. And learned about the tricky shots and speedy skaters of the NHL.

Was it fair that we had to play the Sharks on a snow day in the lower mainland? No. Is it fair we have to play them again in the other Shark Tank? Definitely not.

To compensate, we can hear the Two Johns tell us about the 13th Sharks win at the ROG in the last 14 visits. Ugh.

The dull silver lining in the game was the Nucks PK. Even without Sutter, it was perfect against 3 Sharkie power plays.

The expected dull grey blandness in the game was the Nucks PP. Futile in its 2 attempts to break the non-6-on-4 power play blight.