The 2018 NHL Playoff Round 1 Prediction Thread 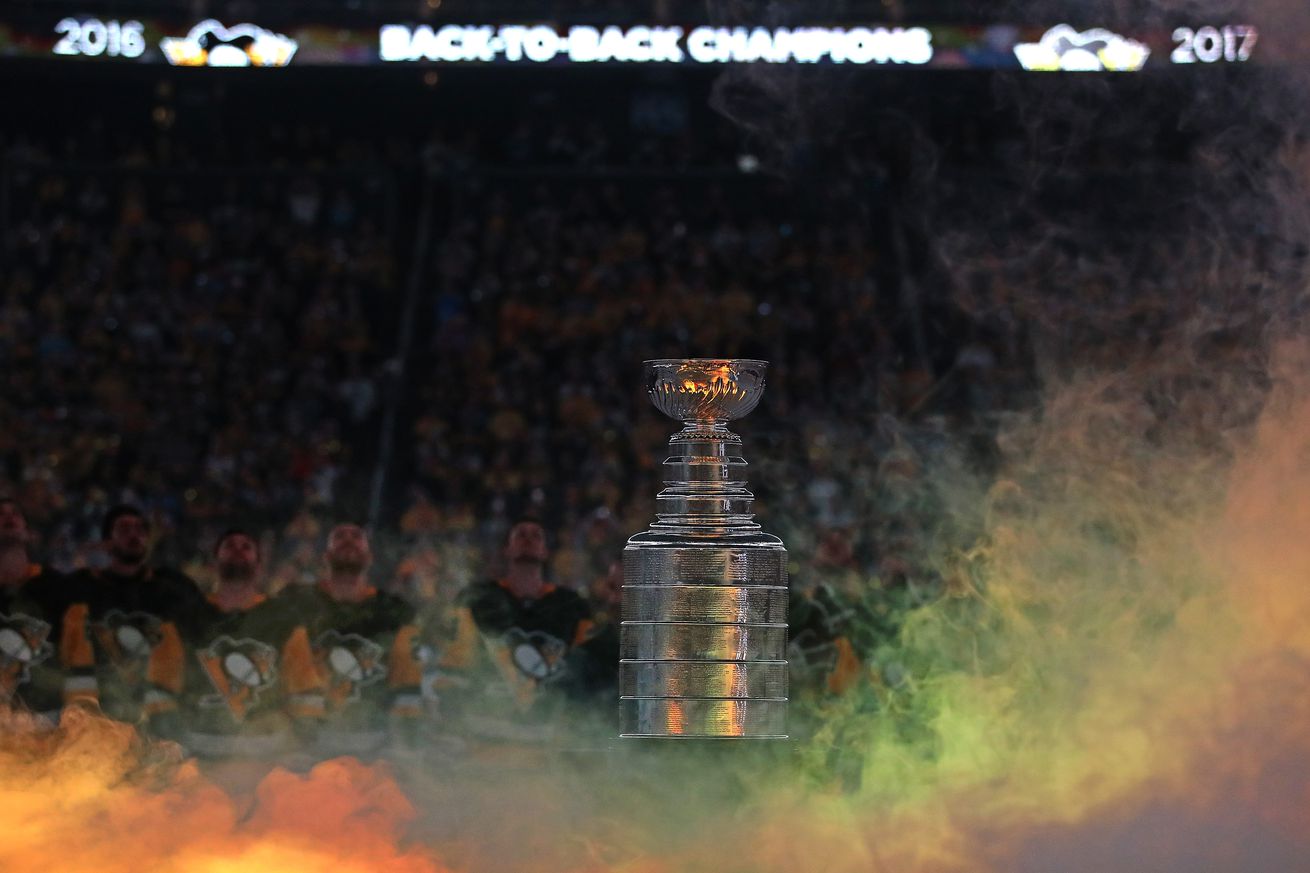 Here’s where we inaccurately speculate on how it all plays out. Let’s get ready to coin flip!!!

It’s time for that 2 month march to glory, folks. The Stanley Cup is one of the hardest championships in all of sport to win, and even when your team isn’t in it, it can still make for some compelling viewing. We’ve been offering up some potential choices for you all to latch on to as far as who to cheer for (and we have a few more to come), but for now, we’re going to offer up our predictions for each round. We encourage you to offer up your own in the comments, and feel free to let us know why you think what you do or if you agree or disagree with our choices. And you can also add your NHL Bracket pick in our league, all the info is here.

Kent Basky: The top seed in the East going up against the surprising Devils. I know everyone loves an upset, and there is sure to be a couple this year, but this ain’t one of them. The Lightning are solid from top to bottom, possess some absolutely insane offensive punch and have one of the best goalies in the NHL. New Jersey might give them a series, but they aren’t gonna come out of it alive. LIGHTNING IN 6

jimmi cynic: It’s the East, so who cares, other than Kent who has to live day-in night-out in an earlier time zone. This is an obvious call, it’s T-Bay in 5.

westy99: NJ looks like it can push some teams around. They beat TB all three times they played this year. That has me thinking.... Lightning in 6

KB: Gotta love a massive Original 6 rivalry in the first round, right? The Bruins have looked very much like the juggernaut that lifted the Cup in 2011. They’re starting to get healthy too, though they do still have some injuries. But there’s been one team they struggled against this season, it’s the Toronto Maple Leafs. Toronto knows they blew it last year against Washington and this season has all been about fixing some of the things that went wrong against the Caps. The Leafs are for real, and while it’s not really an upset given their place in the standings, the Leafs move on to round 2. MAPLE LEAFS IN 7

jimmi cynic: It’s the East and this is the worst of the worst match-ups. Worst in the Nucks definition. I would pick door #3, Meteor Strike over either team moving past round 1. However, since it’s the worst, expect the worst and it’s BOO-URNS in 6.

westy99: You ever had a meal that was had two things on it that you absolutely hated? That is what this series is to me. I hate both of these teams and refuse to cheer for either. I just hate Toronto more. Bruins in 7

KB: Is this the year that Alex Ovechkin finally hoists the Cup and silences his detractors? No, and that’s because I am not convinced they can take down the Jackets. Columbus was one of the hottest teams in the 2nd half, and have been especially good since the TDL (hello, Thomas Vanek!). Something has to give with one of these teams. The Caps haven’t gotten past the 2nd round with Ovechkin, while Columbus still has yet to win a playoff series. That being said, they’re a definite threat, and I pulled out the coin on this one. It came up Caps. Sorry, Torts. CAPITALS IN 7

jimmi cynic: Jeez...so many eastern teams get to play in the 2nd season. It’s not fair. DC is getting way too much swamp water in the media already, so let’s say Columbo in 5.

westy99: Washington seems to know how to score, but they have a different playoff goalie this year. Columbus has a great goalie, Vanek and average special teams. Capitals in 6

KB: Now here’s a series that smells ripe for an upset. Lots of people are penciling the Penguins in for the three-peat, which is gross and bad and shouldn’t happen. This one will be fun to watch because a) there’s gonna be a ton of goals and b) they HATE each other in a serious way. Philly might not have the kind of depth that the Penguins do, but they can hold their own, and I think you’d be unwise to write them off. FLYERS IN 7

jimmi cynic: My entire writing style is based on being unbalanced and unwise, so as disgusting as it might be, gotta go with Pens for way too many times. Pitts in 6.

westy99: I love the battle of whiny teams. Philly’s goaltending is suspect, as in I suspect it sucks. Crosby, Malkin and hot dog Phil take advantage of it. Penguins in 5

One of the favorites to take it all versus one of this year’s best stories. The rise of the Avalanche after finishing in 30th last season is pretty remarkable, and there’s a fair amount of good, fun guys to watch on the Avs. They are outmatched however by a solid Nashville team that’s looking to finish what they started last year on that great run that was ended by the Penguins. PREDATORS IN 5

jimmi cynic: Finally. Getting close to the west. Need to check the geo-maps again, but pretty sure Nashville is a several thousand kms east of Vancouver...so that means...nothing to the NHL. What it does mean is that Nashville is going to sweep the Avs. PREDS in 4.

westy99: How about them Avs this year and the turnaround? All that work and success and for what.... Preds in 4

If you’ve been sleeping on the Jets, this series will be a wakeup call. It’s really starting to look like the Jets are the real deal, and while they may lack playoff experience in their lineup, they have all the tools a team needs for a long playoff run. Minnesota’s no slouch, they had a decent year (especially the incredible season from Eric Staal) but ultimately can’t hang with this Winnipeg team. It’s gonna be one of the most entertaining series to watch, but this one goes to Winnipeg. JETS IN 6

jimmi cynic: This is the easiest one, the Wild have lost their 2 top D, the Jets haven’t. And the Jets are much better all around anyhow - if they stay healthy. JETS in 5.

westy99: The people at Hockey Wilderness have a belief that the Wild can compete with the Jets even though Ryan Suter is done for the year. I’m not sure how much they drink in Minnesota but it must be more than I do. Jets in 5

You might see a lot of people thinking that Vegas can keep this improbable run they’ve been on going into the playoffs, but this Kings team is no ordinary WC team. Think about the 2012 team that knocked off the Presidents’ Trophy winning Canucks. Loaded with vets who know what it takes to win the Cup, the Kings should dispatch Gary’s Golden Boys and put this ridiculous fairy tale to bed. KINGS IN 6

jimmi cynic: Fairy tales are all we have left. Since it’s not our Westiny fairy tale, don’t really care, except LA loses to the house money on the strip, VEGAS in 5, Baby.

westy99: Vegas....Vegas...Vegas. You amazed us all with your consistent play as a team. The bad news is that the Kings took the first half of the year off and started really playing in Jan. The Kings beat the Golden Knights in their last two meetings. The Kings are playoff ready. Kings in 6

The most hateable team in the league against one that’s painfully aware their window is closing fast. The Sharks brought in Evander Kane to bolster their offence for a long Cup run, and with the Ducks having to turn to Ryan Miller in goal after John Gibson was injured Apr 1, you have to like San Jose’s chances. The Ducks managed a pretty good season despite their injuries, but their upstate rival should bring their season to a close. SHARKS IN 7

jimmi cynic: This is just the leftover teams before they get creamed by the Preds and Stolen Knights. Sharks in 5.

westy99: This series should be a fun one to watch. Three of their games have gone to a shootout. The special teams are close to being equal. I think Perry and Getz pull it together for this series. Ducks in 7

jimmi cynic: Of course all these perilous predictions are subject to the whims of the Injury Faeries in conjunction with NHL’s rule-free playoff rulebook enforcement. One of my bucket-list items is to live long enough to see the NHL enforce the same rules at the beginning, middle, end of the real season and into the playoffs. If only I was born a Vulcan, might have a chance on ticking that box. Enjoy the playoffs. I won’t. Not until it’s the New Nucks busting through a couple rounds.

The Archer Warbler of Trincomalee

The 2018 NHL Playoff Round 1 Prediction Thread