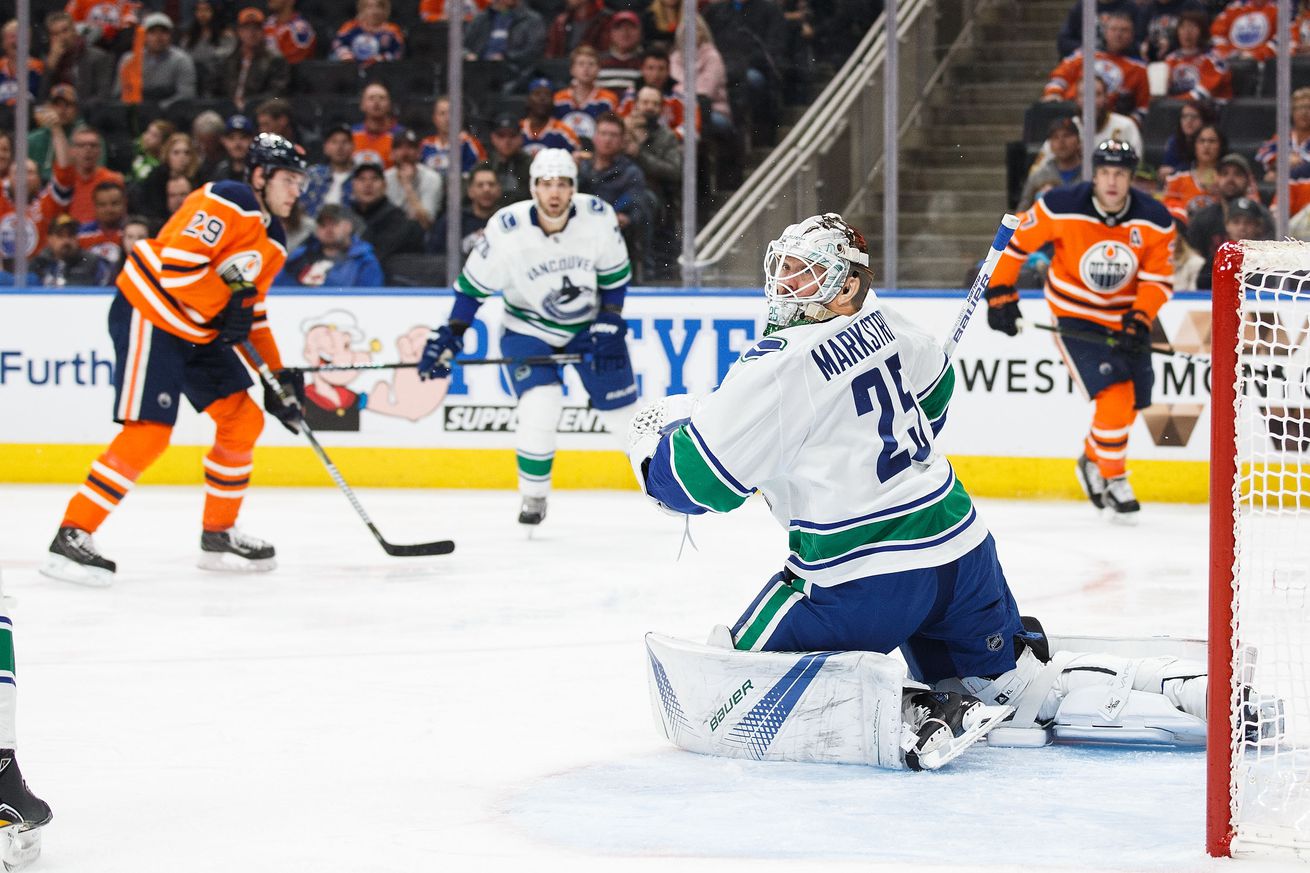 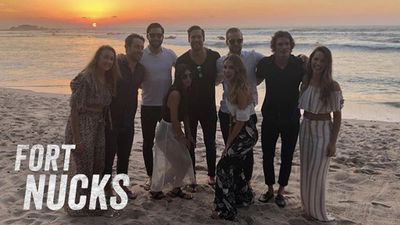 Before we dissect the winning on ice achievement, let’s jump right to the bestest part. No, not the Boest part, because we sorta didn’t get that. Let’s look at the key stat of the game.

Don’t Forget to Brush Your Fur
Tax after Brexit: changes to VAT
Invest in companies before they launc…
How to Set a Deadline and Achieve You…
Three things I learned while circling…

With a victory over Vancouver, Edmonton drops from No. 5 to No. 8.

9.5% chance of a Dahlinish finish to the season. Better us than them. The them that have had 100% chances of first pick more times than is etho-matically fair.

So...you might be wondering how the game was. The game is over.

Stop dwelling on the past!

We have more important things to obsess over than losing a game to the Oils in their home Rogers Garage. Besides, we owed them a game - we beat them in our own Rogers Garage back in October. Like a hidden fairness streak, the teams the Nucks have beaten at home early in the season, have beaten the Road-Nucks later in the season. It’s a great give and take, balance of sports nature thing that I’d like explain, but won’t.

The takeaway is that the Nucks have given away more wins than they’ve taken away since the Faeries of Injury Valley have taken their pound of flesh and bones. Still... the Faeries may release Bo back to his new pre-season form in our mid-season.

Do you want to know that it was 1-0 Oils after 1:35 from a bad giveaway in his own end by Virt while he was channelling his inner Eddie/MDZ/Guds? Me neither. So let’s skip that.

Besides, Westy noted in the gamethread that it was only the seventh or eighth time the Nucks have given up the first goal in the first few minutes of the game. We can take it. Or leave it. Let’s leave it.

So...in our skip-bad-stuff calcs the game is tied at nothing. We feel nothing. And we know that feeling is something not to feel.

Until the 18 minute mark, when another bad thing happened that we didn’t feel. The Nucks stopped competing in their own end and resumed vacay mode. They looked around for the beach rum delivery service to arrive. It didn’t.

Instead, PoolParty picked pucks, pockets and plundered a pass to Khaira who backhanded a petulant puck over Marky’s sievy shoulder.

It was a pretty goal. If you’re an Oil fan. If not, it was an ugly display of Mexican Rivera sand hockey.

Not that anyone seemed to notice, but Brock got a breakaway and beat Talbot stickside. There is no video replay of the event. It was erased from the official record. Probably using alien mind powers stolen from Hollywood efx artists. I saw it - in my squinting mind.

And so the period ended in another fake tie with the Nucks down 2-0. The Nucks were tied in shots at 8-8, which reveals the scoreboard lies. It was a real fake tie.

Can only get better from here. And it did. Power Play style. With only a small droop in power when our former Kassquatch got a short-handed breakaway that Marky stopped like he owned the period. On a short-term lease.

Disaster averted, the 1st unit went back to the 1st priority of the game - get the first goal. Of the period.

And they did. With an Eddiotic Miracle. Edler passed to Brock on the Power Play!!! And Brock passed the puck back to Eddie. And Eddie shot the puck at or near the net. And Danny deflected it into the net! First goal achieved!

I know, there’s no videographic evidence of the alleged pass to Brock. But it happened, we have the receipts. Ask Westy. Or check the video highlight reel at the end of this winning recap. Of a game we won. In ways that won’t be fully revealed for a couple months.

And so does the freshly rehabbed and freshly streaking Sutter.

Sutter can't stop scoring! Second goal in as many games since returning from injury. #Canucks and Oilers tied 2-2, mid-2nd.

Nice dish from Baer. Canucks have a 2-0 lead. In the period.

Or do they? Some highly paid HNIC analysts claim the game is tied 2-2. But not for long. Because....strategy. Lotto strategy. Two words not heard in other more playoff pointed lexicons. No matter.

We are driving our own shiny new 2018 Lexi towards a 9.5% meeting with Destiny. No, not the Westy Destiny. That Westy Destiny is now only available in certain regions on the Hockey History of Destiny channel.

What we need is a goal. From our 2016 first round pick. Who was stolen from us by...uh-huh..the Oilers. The important strategy is.... We can’t let it happen again. Because our stolen pick had 3 points on the night. Including the goal which ended the tense scoresheet deadlock.

We undershot the Oil 9-12, which is why we won the period. But will go on to lose the game. Which we won. Strategically.

We’re playing catchup. Or ketchup. Just don’t want to really catch up too soon or too fast. And then this happened.

If the Nucks can’t get anymore goals in this game, at least one of our prospects can. Not in this game tho. Sorry. League rules or something.

Anyhow, our stolen PoolParty stole the puck from Stecher who was interfered with by the Linesman on the play. No interference penalty was assessed to the Linesman. League officials enforce the rules, not obey them.

Anyhow... our lost pick skated in on a 2 on 1 with Draisaitl (who was picked 3rd in ‘14 when we got pick 6) and that 3rd pick picked the top corner above the sinking shoulder of our almost best player of the game. Until that moment.

The Nucks went for the empty net almost-equaliser and were Marooned on the scoreboard. More cheering for the cheer-depleted Oil fans who have suffered almost as much as we in NucksNation have this season.

We’re pretty sure we’re not going to the 2nd season - but the Anointed One and his top 3 pick Star Powa teammates were expected to be sitting pretty in the standing where the league have put Vegas - against all odds.

Because there’s a game askate. We’ve got bigger scars to open soon enough.

Marky stopped 30 of 34 shots. Not quite enough stopping as Marky wanted.

“Not good enough, that’s it. My job is stopping pucks and today four went in. We were sloppy and cleaned it up, but gave it away in the 3rd. We can’t expect to win when we play like this.” - Markstrom

Still they played the way they needed... to maintain..uh... standing gap coverage. If you know what I mean.

How did the road-trip, camera-shy Green feel about this strategic battle?

“The 1st period cost us the game. We were chasing all night after that, even when tied. We had to take chances and they made us pay.” - Coach Green

It’s a Pay Now, Steal Later strategy. If you know what I mean.

At least Stretch got an apology and maybe a free pass on the next egregious offside call.

He came up and apologized...it's frustrating but we've got to move on." -
@troystecher on getting tied up with the linesman pic.twitter.com/5fl8y0Z9XS

Over in the game-chasing odd-man rushing giving-zone, Danny explains the giving.

"We battled back and they get that third one...that's a tough one for sure." - Daniel Sedin discusses the 5-2 loss to the Oilers pic.twitter.com/l2fRBbsqeu

Finally. The video recap you’ve been waiting for. Maybe not this exact one - one like it from the last game would be better. But still...the Miracle Pass is there to behold. Almost - must use your Sherlock deductive replay skills to detect it.

1st game back from the union-made slacker break. Not unexpected results. At least they got the easy penultimate road game out of the way.

The last game is the tough one. Instead of playing a team that is tOiling in the western basement, the Nucks face a team on the up. And up. And jeeez...the Jets have almost reached the lofty heights of the sequined-star-studded Vegas Stolen Knights.

This could be a good game in Winterpeg. If they called it off now. The Jets play that Bigger Boy style that doesn’t fit our run and comeback style, even if Bo is a go.

Tune in at 4pm PST - start drinking at noon and enjoy.