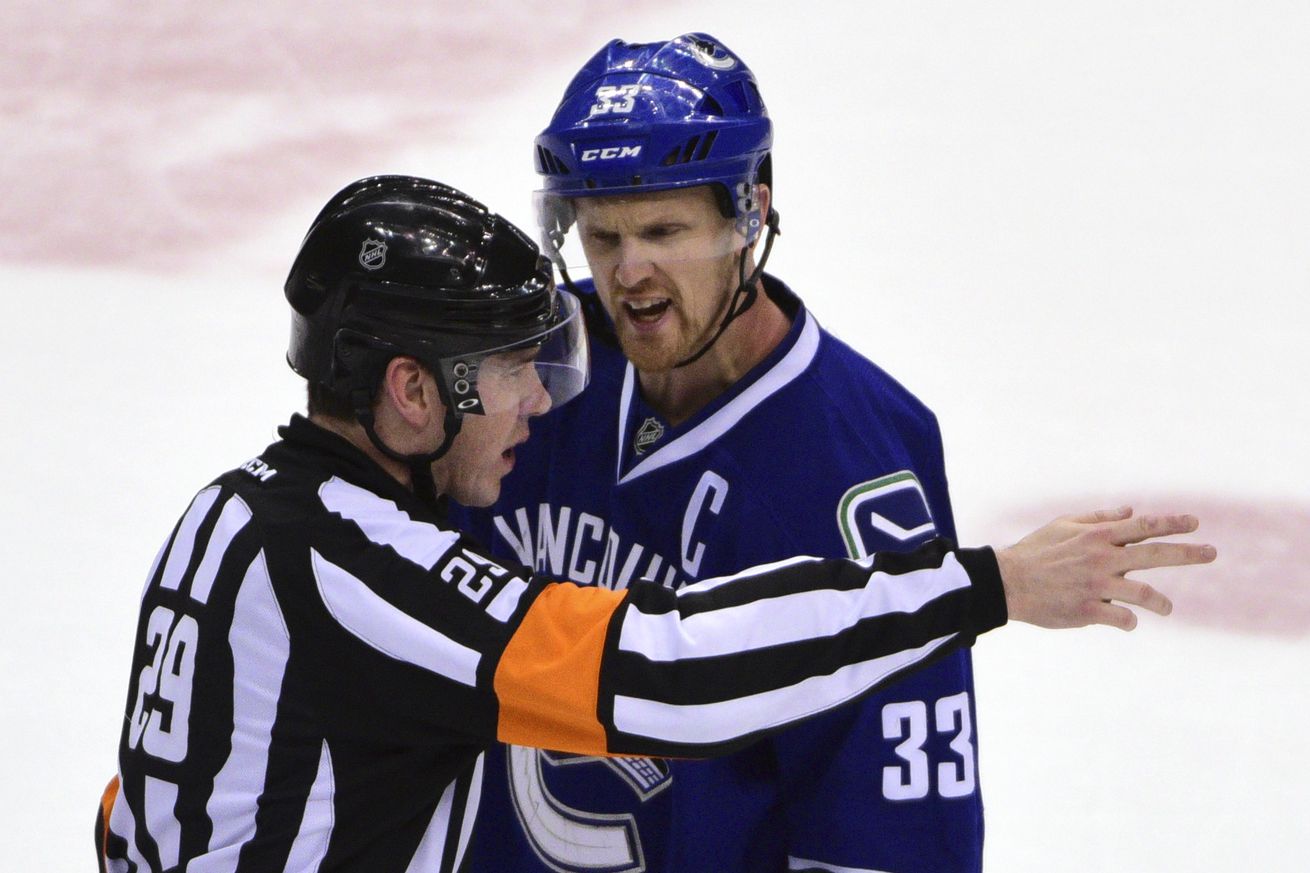 San Jose, Game one of five. Hamhuis said "if we can sweep these games, we can get back in it"...so we know the team still thinks so. Still, five and oh against the Sharks ? Yeah, that did not happen...

This one began as another Hometown Hockey game for the Canucks, this one from Victoria. Watched a little ( Victoria is home to 13% of our last Olympic team!?, Damn. ) .  It is nice to see them in B.C a few times this year, even if it means another 4pm start for a weekend game.

In lineup news, Dan Hamhuis did play ( let the handwringing begin even though he played OK, and did NOT get hurt ) and Adam Cracknell was waived to be eligible to play in the AHL playoffs, but played.  And in late breaking news, right before puck drop ( by Ed Jovanovski and Sami Salo, who both got big cheers ), Matt Bartkowski was pulled and replaced by Yannick Weber, but it was the flu, not anything else ( yeah right, amirite? )

- If you broke this one down into five minute segments, the Canucks won the first five minutes, and then it got a bit sloppy, as the Sharks took over the next five, taking 6 straight shots to lead that count 7-3 at the ten minute mark.  Ryan Miller made a pretty amazing back heel save on one of them that was best enjoyed on the replay.

- It got pretty wide open for a bit there, as the back and forth seemed to favour the home team a bit.  At least at this point, they were playing the Sharks to the outside well, and rolling their lines to create chances.  Etem had a couple on one shift, Cracknell made a curling shot bank pass that Dorsett skated onto, only to be robbed by Martin Jones on the backhand in close.  The North Van native was in his first game against his hometown Canucks, and on Hometown Hockey!  What are the odds ?

- Dan Hamhuis made a solid play on the best chance of the period for the Sharks, as Thornton had a chance after a deflected shot had the goaltender scrambling, but Hammer made a good play on the post.

- The ice time was spread very evenly, with most in the 4-6 minute range, even the defensemen.  Well, almost all the defensemen.  If this is Hammer's last game, they were getting their money's worth, with 7:42 TOI in the opening 20 minutes.  He did that in 10 shifts, but that did not even top the Canucks for the period.  Alex Biega was out for 8:02 over 12 shifts.  I like Biega a LOT, but that stat encapsulates this season in a nutshell.  He is supposed to be a 2nd and 3rd pairing darling, not at the top of the ice time list.  That is Alexander Edler's spot !

- Markus Granlund won his first 3 draws, even tough the Sharks led that stat 11-7 in the opening period.

- I know I talk about Ben Hutton a lot.  ( I like his attitude and outlook almost as much as his burgeoning talent ).  But that is only because he is so good as a rookie.  He has helped a Bottom Five Power Play look better since he got on it, and made several great plays on a very dangerous looking first power play ( Braun off for interference on Hansen ) that the Sharks killed off.  Hutton kept yet another puck in at the line.  Henrik passed it down low to Daniel Sedin, who's first shot was stopped.  He tapped the second one through Jone's pads for his 350th goal, and a 1-0 lead.

- The first power play against the Canucks was a pretty iffy "hooking" call on the goal scorer.  It was probably a harbinger of calls to come.  ( a lot of refs would not make a light stick foul call in a game that is essentially for one team's playoff life, but sure guys, you do your thing ).

- The Canuck PK batted this one away anyhow.  The most dangerous shot attempt was from Burns, and hit Pavelski instead, and Granlund had a short handed shot too.

- Did you know that six years ago today, Sid yelled for a pass from "Iggy" and Vancouver streets overflowed in red ? Now you do.

- The Canucks definitely got momentum from their power play, and the Sharks did not get anything from theirs.  Even a second one ( on a Horvat hooking call on Hertl that had Bo protesting , as well as the bench ) did not get them down.  If the PK was awesome on the first one, this one was super awesome.  The Canucks got some great work from their role players in the second period, as the special teams powered them to a lead after two periods.

The Picture After Forty ;

- The Canucks had a 9-4 edge on the shot clock just in the second, as well as leading the block tally 6-4 after two periods.  They were also ahead 10-6 on the missed shot tally, so the Corsi Events were in their favour too.

- The Canucks had given up 11 points this year ( 2 outright losses, 7 loser points ) ...( foreboding music should follow this clumsy foreshadowing ;-)

- Great story about Larry Orr and his relationship with the Benns on the Island.  North Saanich lost a good guy there.  Hometown Hockey tells those stories well.

- It did not start out all that bad for the home team, as they generated chances throughout the lines the first time through the lineup.  After the second shift for the Sedin line, the Canucks ( OK, Sbisa ) mishandled a dump in and Joe Pavelski took it to the net and beat Miller to tie it up just as the Horvat line was coming on.

- That tying goal was on a simple dump in, but instead of it just being one whipping boy to blame on the second one ( just 2:28 later ), there was a few.  Just watch the clip. it was worth noting that, in that short time, the broadcast told us the Canucks had 2 shots in the 3rd, and 5 blocked to this point.  So, no lack of effort.  They mentioned it on yet another Sedin shift that generated shooting chances.  No, this one came against the run of play, and was a back breaker.  That it came on a tip in from Hertl off a Braun shot that can only be called "shot" by the loosest term of the word is a little galling, but nice tip by him.  And Braun did get it off under a lot of pressure at the line.

- The Canucks were still in the game though, and maybe if Cracknell's wrister that hit the post goes in, it is a different game... ?

- Here's the thing.  I point out the referees because we can.  The technology means you can rewind things back and forth, and HD means you can see a lot of things.  And, on this night, there was an argument to be made that they just pick a team sometimes.  I mean, Granlund is tackled as he goes to the net and the puck comes on the pass ( goal scoring chances are usually penalty drawers ), but Braun skated off free, and they gave him a slashing penalty on a light one on Teirney instead. It was one of those "oops, my stick fell out of my hands, what happened?" calls, but even if you say that was a decent call, when Couture BROKE his own stick on a slash on Hamhuis, went and got another one, and then when Dan the Community Man thought he "got a free one", that "slash" was deemed so egregious that it merited a 1:30+ five on three power play in the last 5-10 minutes of the game.  Because sure, why not ?

- The team did a decent job in the collapsed triangle, but Thornton made a perfectly flat pass to Marleau, and Patrick powdered the puck past Miller.

- Burrows had a chance after the Canucks pulled Miller with 4:00+ left, but he missed the chance ( or maybe the pass was tipped.  It looked like a 2011-12 Sedin set up of a Burrows goal for a second, but close does not count.  Daniel had a shot blocked, and Hutton was stopped by a non goaltender as well.  Braun then closed out the scoring after he got just enough on a puck off a neutral zone faceoff to dribble one home into the empty net from his own blue line.

- No denying the Sharks were the better team in the third, even if they were helped a bit along the way.  They rode a 16-6 edge on the shot clock in the third to victory, and not a lot of those were on that five on three.  They blocked 9 shots in the third ( to 7 for the Nucks ) to lead that final tally 13-11.  Newcomer Roman Polak finished the night with 5 of them.

- Daniel Sedin had 1/4 of the Canucks' 24 shots.  The Sedins line worked their asses off tonight, and so did most the other guys.  The team came up short, and mistakes were made that led to them, but the effort was there again.  Just in a losing effort.

So, now the Canucks get to get the blood boiling against the Islanders ( they hurt our captain ! ) on Tuesday, before the Sharks come back here on Thursday, and then I get to recap another Sharks game in San Jose on Saturday.  They need to sweep all of those to even keep the math from getting just silly at this point.  Oh yeah, and let's hope the wild card teams around us all go on losing streaks.

Oh, what the hell, let's have a song anyways...this one has a nice positive message.  We could use that at this moment... ;-)