How Good is the Vancouver Canucks Shutdown Line? 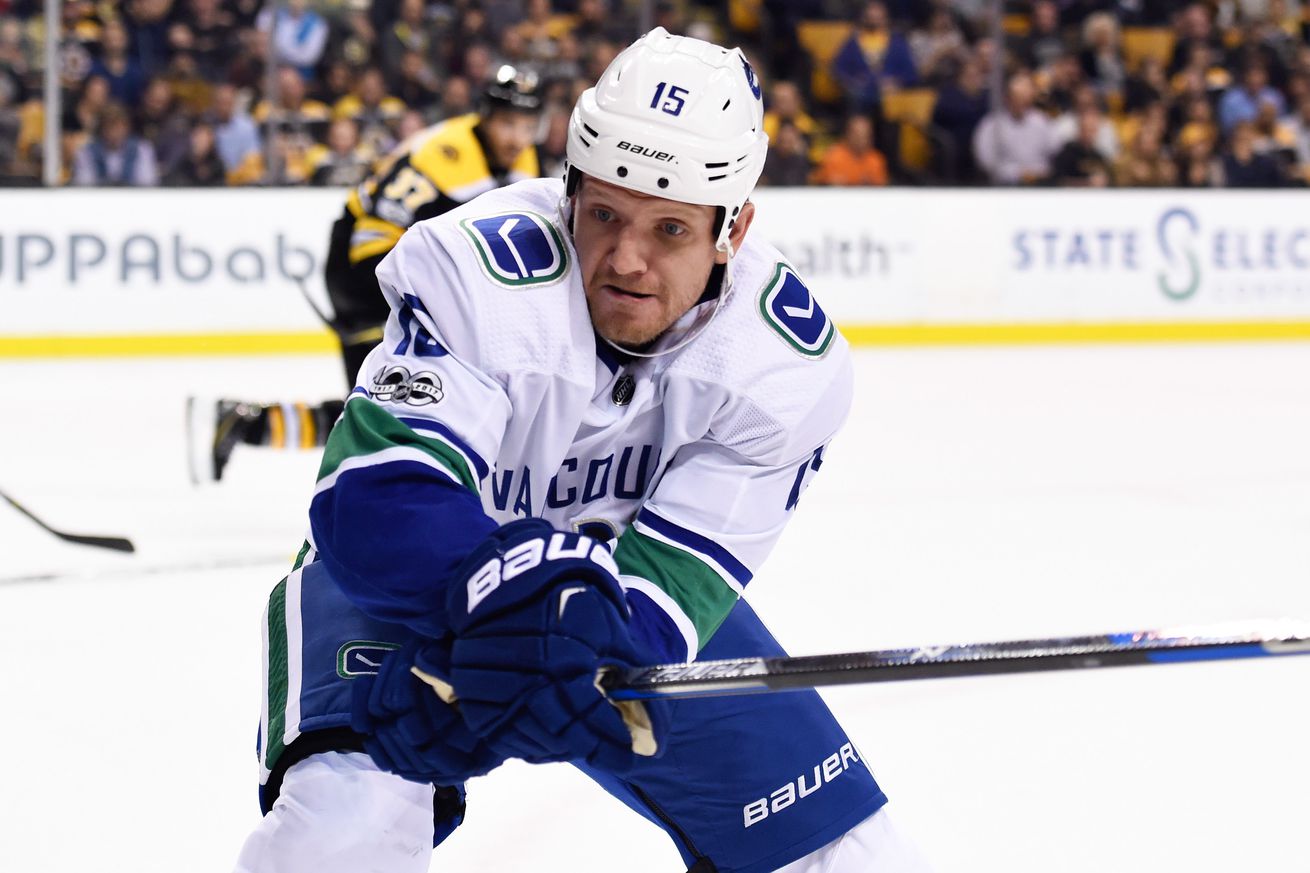 There’s no one that thought Brandon Sutter, Derek Dorsett and Markus Granlund would form the Vancouver Canucks top line heading into the season.

Hell, fans were celebrating during training camp when Sutter ended up on the fourth line.

Yeah, Travis Green pulled a fast one over all of us.

His idea of putting Sutter and Dorsett together to form a shutdown unit was an interesting one. Through nine games, it’s clear that Green is a matchup coach to a tee.

That’s the only explanation for Green playing the line upwards of 15 minutes per night.

Dorsett is sixth among Canucks forwards with 14:51 average ice time through nine games. Brandon Sutter is third with 16:51, and Granlund’s 17:15 trails only Bo Horvat.

Despite showing up on some depth charts as the “fourth line,” it’s clear that they are being played like a first line.

You can see why with these lines from Jeff Paterson. The Sutter line is going to play the top line of the other team every night. Horvat’s line will square off against the other team’s second line.

That leaves the Sedins and Virtanen playing against the other team’s third line, which might not be sustainable, but it’s worked so far. Burmistrov’s line against the fourth line of most teams is a favourable matchup.

Green’s taken this team and dispersed talent evenly through all four lines. Playing his checking line top line minutes is an interesting strategy that hasn’t been seen in this market arguably ever, but at least since Manny Malhotra and Ryan Kesler were playing on the 2011 squad.

How Good Are They?

After looking back through the Canucks first nine games, you could probably single out three bad games for the Sutter, Granlund, and Dorsett unit.

Against the Calgary Flames to end their five-game homestand, no one on the Canucks was particularly good, but the checking line was on the ice for two goals against.

Last night against the Minnesota Wild, the line was playing with fire once again. They were on the ice for one scoring chance for and six against. Once again, the relied on a brilliant performance from Anders Nilsson to get out of that game unscathed.

For the most part though, that unit has been decent. Six out of the nine games they’ve played this season have been good if not great. They did a masterful job of shutting down Connor McDavid in the season opener.

Derek Dorsett is once again outscoring Connor McDavid. I'd like another crazy pill, please.

The one thing people might criticize is that Sutter, Dorsett and Granlund all rank last among Canucks forwards in terms of adjusted scoring chances for.

This is going to lead to criticism that Green needs to ease up on the ice time that he’s giving to the line.

The one problem with that, is who is going to play against the other team’s top offensive units?

Do you put out the current unit with Alex Burmistrov, which has floater Thomas Vanek on that line? Maybe when Brendan Gaunce gets back, but it’s not a good option at the moment.

Gagner and Burmistrov together is convenient so I don’t have to yell at the TV for two different lines.

How about the Sedin line, with two forwards who are easily the slowest backcheckers on the team?

Neither of those are a great option, which only leaves the Horvat line. Willie Desjardins was highly criticized for playing Horvat in a checking role way too much last season. It limited his offence by giving him too many responsibilities defensively. Not to mention, Horvat isn’t a flawless defensive player himself.

Possession stats always need to be taken with a grain of salt, especially when you’re talking about a checking line.

Players who spend their entire night against the other team’s best line need some leeway when your take their possession metrics into account.

Still, there is some cause for concern that all three of the Canucks shutdown forwards have an adjusted scoring chance differential just above 40%.

If things even out over the season, their goals for differential might drop as well. Dorsett’s goal scoring streak has that line just below the 50% mark for goals for. As a checking line, if you can be on the ice for as many goals for as you can goals against, you’re probably doing a masterful job.

Chances are the line will see that goals for total drop as Dorsett cools off. However, with three “bad” games out of nine, their doing a pretty good job as a unit overall in stymying the opposition.

The last thing to consider is the return of Brendan Gaunce. Would Gaunce be worth a look at left wing on that line instead of Granlund? It would allow Granlund the opportunity to get back to his 20-goal potential.

These next five games before Gaunce returns is a chance for that line to show that they shouldn’t be separated. They’ve been pretty good so far but there is room for improvement.

How Good is the Vancouver Canucks Shutdown Line?