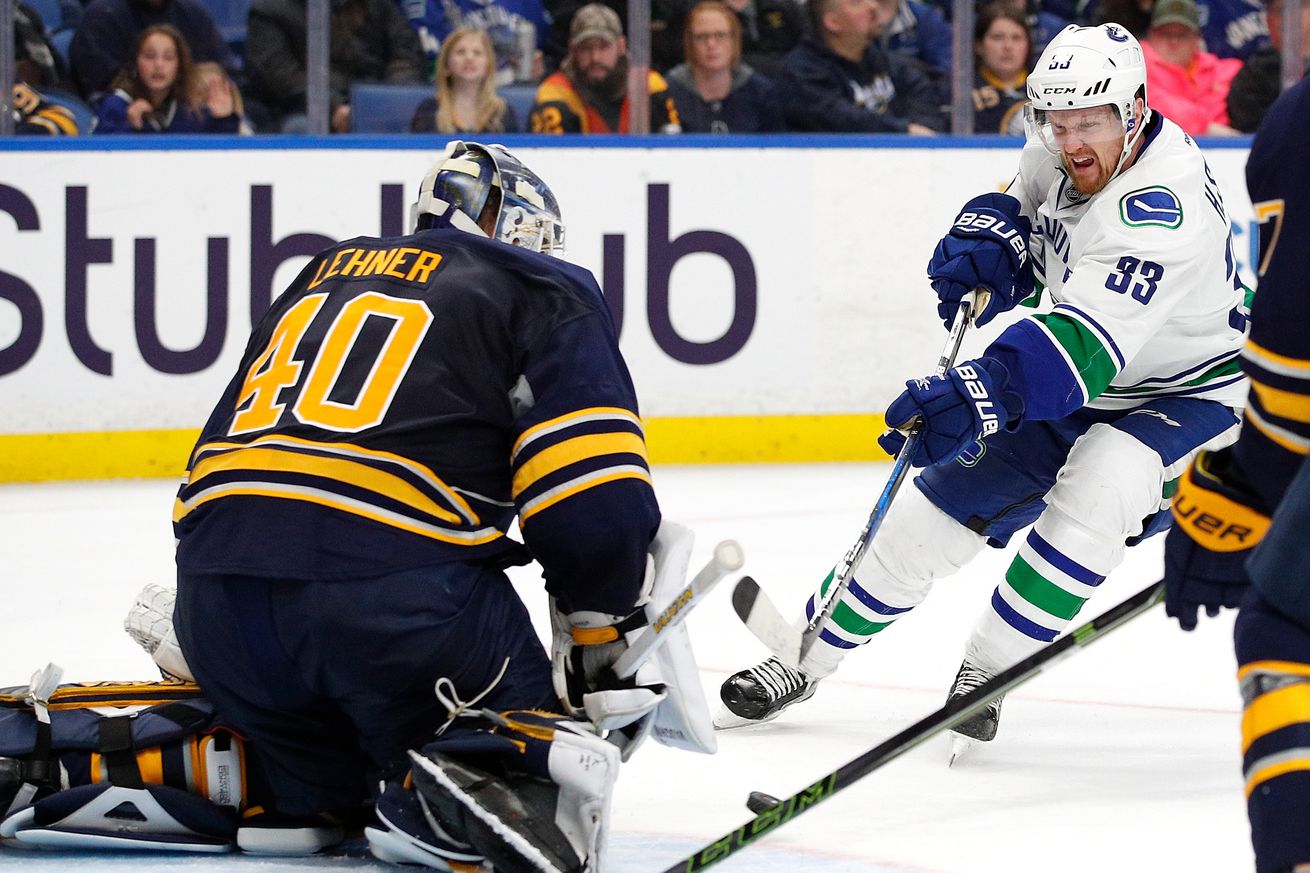 Canucks look to rebound from poor outing against Bruins.

It was not a banner night for the Canucks Thursday against the Boston Bruins, losing 6-3, and allowing four power play goals on the night.

Sabres have just one win, but that top line has combined for 28 pts. #Canucks https://t.co/dDOzaWD8Cr

There was plenty of blame to go around. Ben Hutton had one of his worst games in the NHL, Erik Gudbranson took a five minute major on an ugly hit from behind, and Anders Nilsson allowed four goals in the first period.

Now with Gudbranson suspended for one game, Alex Biega will come to step in, making an already shaky blue line perhaps a bit more so (or stable, I guess, depending on how you view Gudbranson). In any case, it’s always nice to have an excuse to break out the Biega jersey for a night.

The Sabres will be without top forward Zemgus Girgensons, as well as defenceman Josh Gorges. Due to an illness, goaltender Robin Lehner will play backup to Chad Johnson.

Vancouver will have to look out for the aforementioned powerhouse trio of Pominville, Kane, and Eichel, who boast respective point totals of nine, ten, and nine. Unfortunately, their next highest scorer has a whopping... Four.

Sam Reinhart, a former second overall pick in 2014, has goals in back-to-back games. Tonight, Buffalo will also be looking to avoid their slowest start since 2014-15’s 1-7-0 opening.

The Canucks should be able to beat the Sabres, but they’ve hardly looked outstanding to start the year. Tread with caution, Canucks fans.

While it may be fun to chuckle at the Sabres’ lack of scoring depth, the Canucks’ leading scorer has just five. That player of course, is Brock Boeser, everyone’s favorite super rookie. He has points in each of his four games played, and has become a key contributor to the Canucks’ offensive attack.

They’ll also need to see some more consistency from Bo Horvat, who scored last night but hasn’t exactly set the world on fire to start the year. The power play, which scored courtesy of a Vanek deflection last night, will also need to at least pretend to look dangerous tonight.

It also may be time to start getting concerned about Markus Granlund. He might not be playing with some elite linemates most nights, but this is a guy who some pegged for 25+ goals, and who had 19 last year. He’ll need to show something or risk being labelled as a one-season wonder.

After tonight, the Canucks are on a 68 point pace. Granlund is on a 0 goal pace. He is, however, on pace for 0 points due to his 0 assists

The Sedins have also combined for four points (two apiece), and may need to start being put on the back burner as offensive threats, especially on the power play.

Biega will draw in to replace Gudbranson, and Markstrom will get the start, after playing decently in relief against Boston. While no pairings or lines have been announced, look for the defence to look something like:

So yeah, this one could get ugly.

The Canucks performance against the Bruins was, at least for the first period, embarrassing. They’ll need to see a bounceback on a number of fronts, and as individuals as well.

Markstrom will be looking to rebound from a poor performance last week against the Calgary Flames, while a guy like Ben Hutton will look to show his game was just an anomaly, and not indicative of a greater trend.

So it’s safe to say the Canucks will be looking for a comeback, and relying on some kids (see: Boeser, Brock) in doing so.