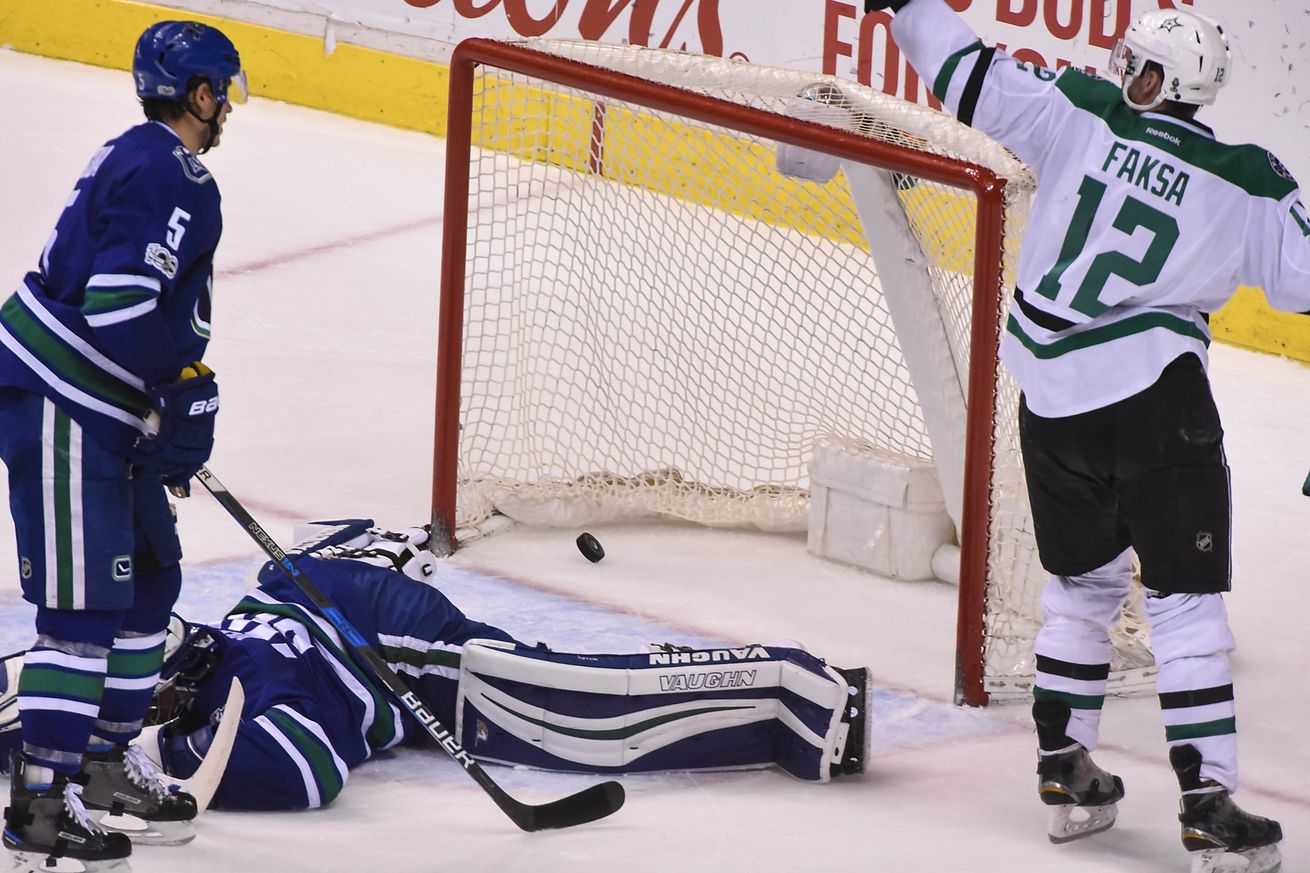 This was the one. In our wild-eyed pretend optimism - this was it - two point glimmers of hope in this long dark home stand. The glimmer was twinkling almost brightly for two periods. The Stars are were sitting beneath us. They have way below average goaltending that other teams having been lighting up - usually both goalies in the same game. We could take tie them. In two periods of play.

Yet, surprisingly the light was snuffed out in the third. Why? Because the NHL is cruel and makes the Canucks, league’s largest meat provider to ravenous Injury Faeries, grind out another 20 minutes of mean, mean-nothing hockey. Competitive sports aren’t known for promoting compassionate game-ending interventions. The NHL is no different, unfortunately.

So...let’s have a look at the starting goalie Willie selected. There’s only one starting goalie, his name is Ryan Miller. The 36 year old #1 who has played all 5 games in this homestand. You’d think Willie would give Millsie a well deserved rest and let Bachman duel with dual Dallas goalies. But, no, you don’t think real good like Willie. You probably worry about wearing out your veteran goalie - especially when he has faced over 40 shots in almost every game in this stand. Not Willie. Gotta give the team the best chance for success. According to Willie starting Miller in 11 of the last 12 games is fair and balanced deployment.

Game at a Glance - #Canucks five-game homestand ends with a 4-2 loss to the Stars. pic.twitter.com/0dpRMjuNFe

It started well. Better than the 2nd since we weren’t down a goal right off the whistle.

And it got even better. Because it remained a tie game for many minutes. Then Alex Hemsky (is he still playing like it’s 2007?) dekes Hutton, or as some say Hutton made a bad play. Or both. Miller comes out to hem in Hemsky and fails. 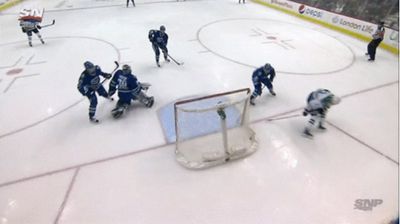 Maybe Miller was going for a poke check. Needed a bigger stick. 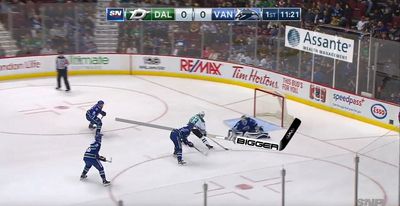 18’ of goalie stick could help

Miller also said post-game that he wasn’t feeling sharp in the first. He was feeling Sharp later tho.

But, that’s ok, because the comeback kids of yore came back. Some good pressure on the Dalloose D allowed Tryamkin to get in Lethemin’s grille. He took a few whacks and Baer swoops in for the rebound - the game is tied! 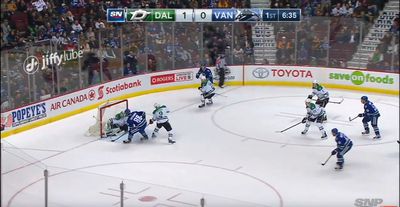 Big T gets an A

All hope is restored. When Groot is in blue paint stuff can happen. He was selected as our star of the game...not just because he was making Stars players see them, but he was doing that too.

But, as the season’s storyline goes...good things, like a tie, can’t last. Special Ed made a surprise special pass from behind his own net to Sbisa who was watching like it was nothing special and let the pass go by to a Stars player who felt special because he got an assist on the ensuing Dallas goal. Miller was screened on the point shot by one of his-soon-to-be former teammates. Isn’t that special? 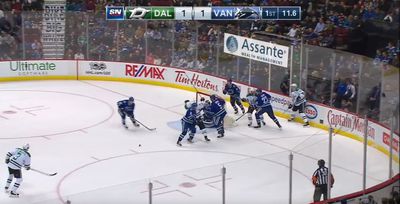 Q: If 2 Canucks are closer to the puck than an opposing player, who gets it first?
A: Neither.

About two minutes in, Groot levelled Benn as is his 6’7” right. Benn picks himself up off the ice and demands frontier ice justice from the Russian bear. Tryamkin with his great sense of justice obliges. He lands a glancing blow on Benn - removing his helmet, most of his dignity and jersey. Benn was so lucky to escape to spend the rest of the night in the dressing room with an ‘upper body’ injury. 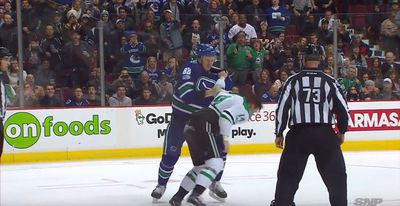 Uh-oh...he’s bigger than he looks when you’re looking for payback.

If Big T was as mean as some players in the league, it could have been a long stay in the quiet room for Benn. It seemed like Tryamkin knew to just hold back and wait for the refs to intervene. As an Islander have to give kudos to Island-boy, Benn for his foolish attempt at pride redemption. My hope is that someone on the Nucks media team sends Benn a few clips from Guardians. Benn didn’t return to the game and we don’t know if he’ll be ready to fight again tomorrow night known big bruiser Johnny Hockey.

Meanwhile, Groot was two thirds of the way to a Howe hattie. That elusive last third tho. He was also the only Nucks D-man on the plus side of the +/- stat.

If it seems like I’m stretching the 2nd period out into an epic tale of pushback, you have more imagination than me. It’s because this period had the hints of a team wanting to play to win. A period of hockey.

And then did. After the fruitless attempts on the man advantage the 30th ranked power play in the league went to work in the last minute of the period. And this time the work worked. We got a POWER PLAY GOAL! It was Hutton’s game-tieing redemption in the last second of the game period. So wish it was the last seconds of regulation. I could stop typing and do a single point dance. That’s not so bad.

Hutton took the initial shot and with the scrambly play in front and our sleeper agent Hammer sitting down on the job, Hutton grabs the loose puck, dekes the Letinemin guy and scores! On the POWER PLAY!

The crowd on the NM Game thread went wild. Both of us typing like drunk kitties at a catnip tasting bar.

We could just ended the game right there. Take our single point and more importantly our dignity and go home. But, as ever, we had to face the the worst period in hockey, the 3rd one.

After the momentum build up from Hutton’s POWER PLAY GOAL! Yes, I’m excited to type that phrase. That POWER PLAY GOAL gave the Canucks the boost needed to push the tempo of the game and take the lead. Almost. However, as per the low shooting percentage wins games philosophy, the Canucks had only managed 5 shots on goal by mid-period. The Stars had 16 at the half way point. Sound familiar?

Miller as predicted, was sharp on Sharp’s break away and while we waited and waited for the Nucks to venture into the O-zone and level the shot count a little, the Bulldog got caught hounding a Dallas player a little too pawerfully in front of our net and was sent to the bad dog booth.

At least we didn’t give up a power play goal. Oh wait. We did. A tuckered out PK with a near motionless Bo allowed Dallas enough zone time to let Seguin get set up for the one timer. The kid has a hard shot. Blew the puck past a weary Miller and the Stars were ahead. Again. For like the 3rd time.

Ok, so half way through the third, down a goal, how bad can it be? It can be so bad that young gun D-hero Stetcher can lose the puck in front of our net. The puck slides past Sbisa who wants nothing to do with used pizza and takes a whiff at it in gourmet disgust and Faska, who unlike some young players, likes seconds old pizza. He scores on the doorstep. Where the last drop of Miller’s energy had dropped.

And so our brave looooooosers played the 6 on 5 game winning gambit and managed to keep Dallas from scoring the EN goal. Without scoring another goal for. Or another. So yuuuge moral victory. Despite getting outshot 20-9 in the 3rd. Ok, maybe not so huge. At least they didn’t let Miller face over 40 shots in this game (just 36), so that’s something. Something not even close to a morale picker upper though.

Here’s the game in 5. Watch at your own risk.

It’s not losing this game that hurts so much. It’s the 5 game losing streak. At home. That hurts. Felt strongly the Nucks could win this game. So strongly I even bet my personal SPW winning streak on it. Idiot.

Despite a tough loss, Coach doesn't think there is any quit in the #Canucks locker room. pic.twitter.com/gMJ5QbWyDJ

Heard the Miller interview post game...he hasn’t sounded this down since...last year at this time. Can’t imagine that he wants a play in next year’s Nucks Rebuild: Part Deux. Or is Part Trois? Quatre? Cinq?

Unless, as a friend suggested, Miller is like the Rake character on the NetFlix series - feels that only hopeless cases are worth fighting for. Not that NucksNation have reached the point of hopelessness. There’s still 12 games to finish us off!

The good news is....out there somewhere. We just have to find it. Together. Maybe on June 23rd when our descent to the near bottom of the basement will seem shrewd. What the tankeristas don’t tell you is falling down the standings staircase can cause bruising of a fan’s private.... thoughts and hopes.

Anyhow, the cheerful VanCityDan will be around for the Saturday recap for the Edmonton game which is cheering me up a little already. Stay safe and never watch a Canucks 3rd period alone!