Game four of the World Series is set for Saturday, October 24, 2020, when the Los Angeles Dodgers play the Tampa Bay Rays in Arlington. Los Angeles will look to move within one game of lifting the World Series, while Tampa hopes to even the series back up with a win. This game will air live on FOX at 8:08 p.m. EST.

Tampa Bay came to play in game two as they evened up the World Series with a 6-4-win Wednesday night. Brandon Lowe was the story of the night as he broke out of a series funk as he hit two home runs and knocked in three Rays. The Rays led 6-2 heading into the sixth inning, but the Dodgers fought back to make things uncomfortable for the Rays the final few innings. 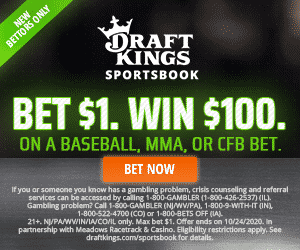 The Dodgers jumped all over Tampa Bay in game three and came away with a 6-2 win. Justin Turner got the party started with a first inning solo home run and eventually extended their lead to 5-0 through four innings. Walker Buehler and the Dodgers bullpen were brilliant Friday night and the Dodgers now hold a key 2-1 series lead. Two more wins for a World Series title.

Through three games, the Los Angeles Dodgers are now -500 favorites to win the 2020 World Series. Tampa Bay is +370 to lift the trophy.

Below is my pick for game one of the World Series between the Los Angeles Dodgers vs Tampa Bay Rays. All odds are from DraftKings Sportsbook.

Julio Urias is set to make his fifth appearance, second start, of the 2020 postseason and he will look to continue his miraculous October run. Urias first appeared in the NLWCS when he held the Brewers to three hits and zero runs in three innings of relief. The righty then pitched in the NLDS and held the Padres to one hit and one run (zero earned) in five innings of relief. Urias made his first start of the postseason in game three of the NLCS and he got the win after holding the Braves to three hits and one run in five innings of work. Julio Urias’s most important appearance came in game seven of the NLCS when he held the Braves hitless over the final three innings to secure the Dodgers berth in the World Series. Urias has been one of the best, if not the best, pitchers in the 2020 postseason.

Ryan Yarbrough is set for his fourth appearance, second start, of the 2020 postseason and will look to continue his fine form. Yarbrough held the Yankees to six hits and two earned runs in the ALDS and then held the Houston Astros to three hits and two runs in five innings pitched. The righty appeared in game two of this series and gave up two hits and zero runs in 0.2 innings pitched.

MLB Predictions: I like Los Angeles to take a 3-1 series lead.