The Boss: Mikey Garcia, In Control

Back in May, mere moments after Vasyl Lomachenko delivered the knockout blow to Jorge Linares in the tenth round of their lightweight unification bout at Madison Square Garden, an elated Bob Arum was rhapsodizing about the torrid seventh round that saw his “Hi-Tech” battle through the first knockdown of his professional career. But when reporters began quizzing the fabled eighty-six-year-old promoter on the possibility of seeing Lomachenko face Mikey Garcia, the undefeated four-division titlist who ranks among the sport’s elite, it did not take long for him to snap back to his usual cantankerous self.

“[That’s] a worse negotiation than Trump is gonna have with the North Koreans,” Arum groused, referencing the planet’s most pressing geopolitical meeting. “I don’t have time for negotiations. If [Garcia] wants to fight [Lomachenko], let him call me. I’ll give him a number. If it’s not good, fuck it. I ain’t negotiating.”

Though relationships in boxing routinely spill over with bad blood, few grudges measure up to the resentment that comes out of a lengthy, acrimonious lawsuit involving a promoter and his fighter. Garcia, after all, was at one point one of the crown jewels of the Top Rank stable, someone who would eventually take the place of aging superstars such as Manny Pacquiao. Those plans were abruptly scuttled in 2014, when Garcia, unhappy with his purses, sued Top Rank to get out of what he believed to be an invalid promotional contract.

When asked about Arum’s surly comments in a recent phone call, Garcia initially sounded nonplussed. “Look, I don’t know what he’s talking about, about me being so difficult,” he responded, as he was driving to his brother’s gym— The Robert Garcia Boxing Academy—in Riverside, California, for an afternoon workout. Garcia claims that the last time he had an actual face-to-face conversation with Arum was nearly five years ago in the lobby of DFW airport before a press conference for his match against Juan Manuel Lopez. Outside of that instance, Garcia cannot “remember a time that I negotiated anything with [Arum].”

Then he added, his voice rising, “If he means being difficult because I ain’t being stupid and signing something that he proposes, well, maybe that’s what he means. I ain’t gonna let someone push me around knowing what I know now.” 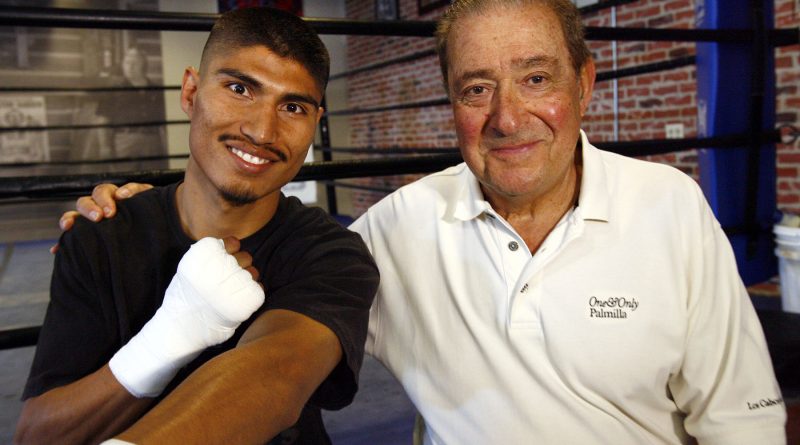 Garcia claims his last face-to-face conversation with Arum was nearly five years ago in the lobby of DFW airport before a press conference for his match against Juan Manuel Lopez.

What Garcia, thirty, knows now is that, in boxing, the only person who has your best interests at heart is yourself. Fighters who master the art of self-preservation in the ring are always lauded, so why is it any different on the business end?

Garcia’s suit would siphon off two-and-a-half years of his valuable prime as he traded in his punches for courtroom appearances. He ditched his longtime manager Cameron Dunkin and hooked up with influential, if nebulous, Al Haymon. Finally, in August of 2016, he reached a settlement with Top Rank that officially released him from all obligations.

“Knowing what I know and how [Arum] runs the company, after opening up the books through litigation, through discovery, after me finding out all these things, maybe that’s why he’s afraid to do business with me because he knows I ain’t gonna just agree to his terms. Maybe that’s what he thinks.”

All of which has made Garcia pessimistic about the chances of seeing one of the most significant matchups in the sport materialize, Arum’s own obstinacy notwithstanding.

“I don’t think the Lomachenko fight is going to happen anytime soon,” admitted Garcia. “There are some good fights at Top Rank that I would like to be a part of, but at the moment being the way the relationship ended, and how things are, I don’t know if they are willing to work with me.”

If prizefighting is “the last bastion of laissez-faire capitalism,” as Mike Trainer once claimed, it stands to reason that its most brilliant participants—the ones piling up knockouts in the ring—might have a few ideas about how to run their own business. But in reality, most fighters, from schlubs to big shots, are beholden to a business model in which promoters, managers, and a seemingly endless succession of middlemen sell fighters a bill of goods. Boxing may be a free enterprise, but few fighters, historically speaking, have found success apart from under the long, domineering shadow cast by the sport’s traditional powerbrokers. Indeed, apart from Trainer’s most renowned client, “Sugar” Ray Leonard—whose megawatt allure and elite ring skills enabled Trainer to work directly with television networks hungry for the next Muhammad Ali without having to sign his client to a long-term promotional deal—the list of boxers who have struck out on their own path without a promotional contract is short.

Garcia, who has publicly stated his dissatisfaction with the way Top Rank President Todd duBoef refers to fighters as “products,” views the free agent path as the only sensible and humane option in a cutthroat business. If the downside is that he is perceived as a mercenary, so be it.

Since his layoff, Garcia has seen his name reemerge in headlines. He collected the WBC lightweight title in early 2017 by annihilating Dejan Zlaticanin. Later that summer, Garcia announced his presence in the 140-pound division by soundly outpointing problem child Adrien Broner. Most recently in March, Garcia collected his fourth world title with a decision victory over the resilient Sergey Lipinets. And on July 28, Garcia will move back down to 135 for a partial unification bout at the Staples Center in Los Angeles against IBF titleholder Robert Easter Jr.

That all of Garcia’s fights since returning to action have been strictly on Showtime, the home network for Haymon’s PBC venture in recent years, raises questions about the legitimacy of his so-called free agent status. On that front, Garcia argues that he has a good relationship with Showtime head Stephen Espinoza—“He’s easy to work with, straightforward and clear”—and that, as a matter of courtesy, he wants to give Espinoza the chance to counter any offer that he receives from competitors. “Stephen has treated me well,” said Garcia. “He gave me a chance by putting me on as co-feature on the Santa Cruz-Frampton fight in July of 2016. I feel that’s only right. I’m not just going to turn my back on him without giving him notice.” If he appears so regularly on Showtime, Garcia argues, it is because, in the end, the best offer comes from them.

The numbers are hard to dispute. Against Lipinets, Garcia was reportedly paid $3.5 million, an outrageous amount for a non-PPV bout.  And while he frequently works with Haymon on his fights—“He gives exact numbers that I need to know, clear-cut, not sugarcoated. You know, not hiding things from you”—Garcia wants to make it clear that he is the one calling the shots. “I like to do business with Al. If I need to have him around for any business and he’s available, then that’s great. If not, then I don’t need him, and I go on my own.”

According to Garcia, he is in serious talks with the likes of UFC boss Dana White, UK impresario Eddie Hearn, and Richard Schaefer about possible long-term commitments. He notes, however, that any deal would have to be tantalizing for him to consider leaving his current arrangement.  “It’s gotta be special. Until I get something that really gets me excited, I’m going to continue doing my business the way I’ve been doing it, with the relationships I have and the fight-by-fight deals I’ve been getting.”

Which is to say that Garcia is pleased that the second half of his career is unfolding the way he envisioned it: Skipping the crusty promoter and crafting his own terms on his own time. In the end, it comes down to a question of autonomy. “That’s what I like about the position that I hold,” Garcia said. “I am able to be free. I don’t have to ask permission from anybody. I don’t have to bring a manager with me to any table. I go direct and we speak boss to boss.”

Case in point: Garcia revealed that he flew out to Miami recently to meet with Miami Marlins owner Derek Jeter. Among the topics they discussed was the possibility of bringing boxing cards to Marlins Park, which holds over 36,000 seats. In other words, it was just the kind of extracurricular undertaking that would have been impossible to imagine under the auspices of Top Rank. “I like that I’m able to do that,” Garcia said, “The possibilities there [at Marlins Park] are endless, really.”

Yet should one think to group Garcia among the shortlist of modern-day pugilist-businessmen, the Moreno Valley native insists that he is as much fighter as anyone in the sport. Talk is eternally cheap, but Garcia claims to want to face welterweight titleholder Errol Spence Jr. at one point, even perhaps before the end of the year.  “If I was intimidated, I wouldn’t be talking about it,” said Garcia, adding, “I need the big fights, where everyone is doubting me.”  But he understands that things in this haphazard sport rarely go as planned.

“I’m not waiting for or chasing anybody,” stated Garcia. “If one opponent is not available we move on to the next guy. That’s why I’m still working the way that I am. I’m willing to talk to anybody.”

That goes for Top Rank, as well, who Garcia says reached out to his brother recently to see if he would be willing to talk. Garcia had a simple response to relay:  “I told my brother they can call me.”

The post The Boss: Mikey Garcia, In Control appeared first on Hannibal Boxing.

My Experiences with the Montessori System of Education

The Boss: Mikey Garcia, In Control