Manchester United have joined the race for one of Germany’s top young talents, while Lionel Messi has given Barcelona the name of a left-back he wants them to sign, according to Tuesday’s European papers. 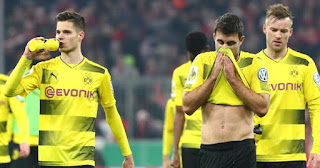 The 22-yer-old still has three years remaining on his contract with the Bundesliga giants but that has not stopped some of Europe’s big guns sniffing around one of Germany’s top young talents.

The report states that United are ready to make a big-money bid in the summer, but could face competition from Barcelona and Bayern Munich, who have both been linked with the player in the past.

Weigl, who is a dynamic box-to-box midfielder, has played more than 70 Bundesliga games for Dortmund and has one five senior caps for Germany.

It’s not quite clear what the future holds for 28-year-old Alba, but after making 29 appearances this season, he has been left out of the last two La Liga line-ups.

David Alaba: Big fan of Arsenal
Lucas Digne started against Espanyol and Alaves, but Messi wants the club to strengthen in that area and the Argentine superstar has given the board of directors a list of candidates who could potentially be brought in to fill the void.

Manchester United have been offered the chance to sign two players from La Liga this summer, according to reports in Spain.

Diario Gol suggests United’s executive vice-chairman Ed Woodward has been approached by Real Madrid president Florentino Perez with first refusal on a deal for long-serving striker Karim Benzema, who looks set to be shown the door this summer.

The Spanish outlet claims Perez hopes the potential deal will act as a sweetener ahead of a fresh attempt to bring long-term target David De Gea to the club from Old Trafford, amid talk the goalkeeper will push to finally make the move this summer.

But while United will decline the offer – particularly for the alleged €60million asking price – they could be tempted by a similar approach from Barcelona.

The same outlet claims the La Liga table toppers have spoken with representatives of both Chelsea and United to see if they would be interested in signing Ousmane Dembele this summer.

The France winger only arrived last summer, but has had a torrid time with injuries and it’s claimed they could allow him to leave for €100m – that’s €5m less than they paid Borussia Dortmund.

Barcelona are reportedly closing on a summer swoop for Antoine Griezmann, but after making this admission about their transfer budget this summer, do need to raise funds to bring in the Atletico Madrid favourite, who has a €100m exit clause in his contract.

Griezmann, meanwhile, is already house-hunting in the city ahead of the anticipated move.

AND THE REST
Barcelona’s Sergi Roberto is set to sign a contract extension. (Mundo Deportivo)


Luis Fernandez, PSG’s head of academy, has claimed that Neymar will stay put in Paris and will not leave, despite Real Madrid’s known interest in him.

Fernandez said: “I put my hand in the fire because Neymar is not going to go to Real Madrid, he is showing that he likes to play here. If PSG has gone to look for Neymar or Mbappé it is for them to stay, not for them to leave.” (Cadena SER)


Former Barcelona Luis Enrique, who has been linked with Chelsea, is not interested in taking a new job until the end of the season. (Goal)


Arsenal and Liverpool have suffered a blow to their chances of landing Bayer Leverkusen’s Leon Bailey with claims the winger has his heart set on playing for Chelsea. (Kicker)

Former Arsenal defender Mathieu Debuchy has admitted he was “angry” with Arsene Wenger for blocking a move to Manchester United last season.

Chelsea have told Real Madrid they want Marco Asensio as part of any deal for Eden Hazard this summer, amid talk the Belgian could move in a £120million switch (Diario Gol)

Napoli will reportedly meet Maurizio Sarri next month to discuss a new contract, as well as removing his release clause (Il Mattino)

Inter Milan have reportedly had a €20m bid for Lautaro Martinez knocked back by Racing Club, but there’s optimism a deal will be completed (SportItalia)