Liverpool are set to trigger the €45m release clause in a Roma star’s contract, while Barcelona’s hopes of signing a second player this week have hit a stumbling block, according to Tuesday’s European papers. 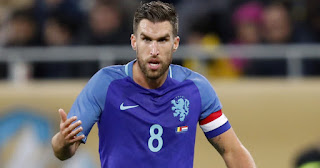 LIVERPOOL TO SPRING SURPRISE AND SWOOP FOR ROMA STAR

Liverpool are set to spring something of a transfer shock by swooping for Kevin Strootman, according to reports in Italy.

Fresh from selling Philippe Coutinho to Barcelona for a fee that could reach £142million, the Reds are in no mood to rest on their laurels with R.IT Sports, via Calciomercato, claiming Jurgen Klopp is ready to activate the €45million buyout clause in Strootman’s contract.

Although nothing is confirmed at this stage, the news will come as something of a surprise given the player has long been linked with a move for Manchester United, and in particular, during Louis van Gaal’s time in charge.

The Holland midfielder, however, has struggled with injuries during his time in Serie A, having only made 108 appearances during his five seasons with the Giallarosi.

But with Emre Can looking increasingly likely to leave the club on a free transfer at the end of the season, Klopp needs a solid midfielder to come into the midfield to compliment and provide cover for incoming arrival Naby Keita.

Liverpool have already poached Roma over the past six months with Mohamed Salah arriving for £36.9million.

Yerry Mina’s move to Barcelona has been held up after Palmerias demanded €12m, rather than the €9m the La Liga side have offered (Mundo Deportivo)


Pep Guardiola has identified Fred as the long-term successor to Fernandinho, with Manchester City beginning talks to bring the Shakhtar Donetsk star to the Etihad in a £30m deal (various)

Inter Milan are favourites to land Daley Blind from Manchester United this month, with the Red Devils prepared to sell the Dutchman for the right price (La Repubblica)

Nantes coach Claudio Ranieri has confirmed he would be interested in PSG forward Lucas Moura, who is also a target for Manchester United (Le Parisien)


Leganes have told West Ham their £5.5m offer for Gabriel Pires is not enough and they now value the player at nearer €20m (Marca)