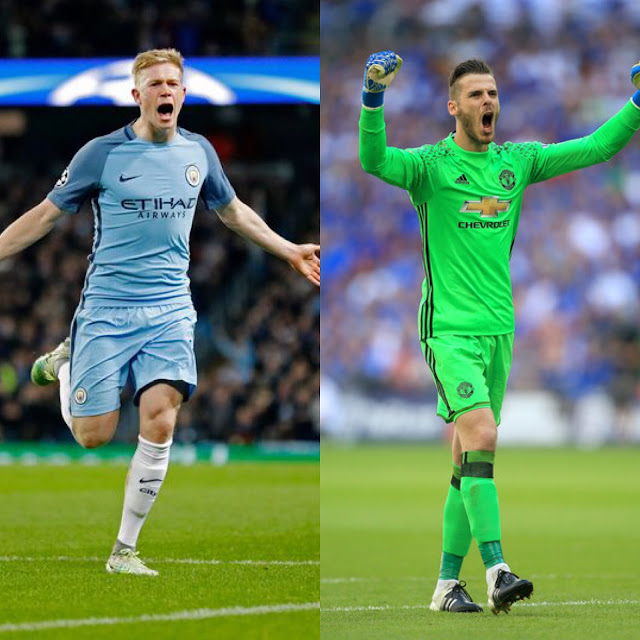 Manchester United rolled back the years to send shivers down the spines of Arsenal fans at the Emirates, something that used to be a norm, maybe this would have been different had David De Gea had a stomach upset before kickoff, or probably picked a problem with his fingers in the build up.

He proved to be the best goalkeeper in the world by a country mile against a very angry Arsenal side, foreplays don’t lead to pregnancy, if the ball doesn’t cross the line it doesn’t count as a goal, efforts without precision is a waste of time or better still, attempts with a De Gea in goal is like trying to force Donald Trump on North Korea as president.

Hey, this is the Manchester derby, not sure a lot of United fans are looking forward to facing Manchester City, if Arsenal were wasteful, not taking anything away from the saviour of the devils in the Spaniard number one, be assured that Sergio Aguero and Gabriel Jesus won’t be, Kevin De Bryune won’t be, David Silva, the ageless wizard won’t be, and of course the two guys on the brink of landing the title for the citizens, Leroy Sane and Raheem the last minute Sterling boy.

How will Manchester United approach this? No Paul Pogba who was sent off at the Emirates, thus ruling him out for three games in this busy period, a certain Romelu Lukaku must halt the rot and come through in big games, if there’s any game where you’re highly needed, this is it.

Chelsea hammered Newcastle last weekend before relinquishing their top spot in their UCL group to Roma after playing out a 1:1 draw at home to a resurgent Athletico Madrid; The blues were in rampaging form after going a goal behind to the Toons but the Gordies, like they did at Old Trafford, let the lead slip almost immediately as Benitez watched helplessly.

Eden Hazard’s form is in the thick of everything for Chelsea, scoring freely and roaming devastatingly around everywhere, this time he takes his finesse to the Olympic stadium where West Ham are struggling for their lives, they did put up a respectable show at the Etihad last time out, keeping City out till very late on before succumbing to yet another defeat, the ghosts of the days of Slaven Bilic still very much around as results still hurt, not many of their fans will expect any result as the champions visit but this is football!

Elsewhere after the lunchtime cracker at the Olympic Stadium, Burnley will hope to return to winning ways as they host Watford, another team of strength and unpredictability, the discipline of Burnley was broken by Leicester, they laboured in vain to equalize but it was out of their hands when Brady limped off, Watford need a win too, their heroics at keeping out Spurs for a good while needs to be built on, this would swing anywhere, where it’s most wanted.

Crystal Palace and Bournemouth both played out a draw against respective opponents last weekend, a result that brought in temporary respite for both sides, squaring up against each other means they both have to go for it, two attacking sides, two defensively porous sides and two sides parading English managers of different history, one almost twice the age of the other, this most likely will end in a draw, end to end actions expected, but whatever happens, the eagles will still be down in the red zone, it’s a long walk out for them.

A feel of championship football might hit our screens on Saturday, no disrespect to either side but Huddersfield will attempt to halt the rot and pick something against a bogey Brighton, David Wagner and Chris Hughton square up on Saturday for the first time in the premier league, as it stands it looks like they’ll both do it again next season, but Huddersfield must pick their selves up, the best result here would be a draw but Brighton have picked away results this season to the dismay of teams like Swansea, it’s a hard time for Huddersfield but they must rise to the occasion here, it’s their stadium, it’s their fans, it should be their game too.

Tottenham Hotspur rested Harry Kane in midweek and still beat Apoel comfortably, the Wembley tenants have been poor of late, they couldn’t beat a West Brom side that had lost too many before facing them, after losing the North London derby in a very questionable manner, they still managed to allow Watford run with a point, thereby sending them further down in the pecking order at the summit. This is Stoke, a team parading one of their former men, Peter Crouch, the lanky forward is bailing Stoke out week in week out, over-reliance on the old man seems to be a problem that needs checking for the Potters but they can hope of a result here, one that would follow a decent win over relegation-threatened Swansea.

Talking the Welsh side, Paul Clement is under a hell of pressure, the team is sliding down faster than a coin in the pit, too many casual players at the Liberty stadium, no sense of urgency of any sort and they keep on languishing in defeats and pains, they face West Brom now and must win, the days of Tony Pulis are over at West Brom too and they now have a certain Alan Pardew who would be the latest to trouble Mr Clement.

Not long afterwards, Newcastle, fresh from yet another defeat at Stamford Bridge would host Leicester, a team on the rise since the appointment of Claude Puel who took over from the gifted scriptwriter, Craig Shakespeare, Leicester have been winning since and they most likely will trouble Benitez and Co, this will be an interesting way to close shop on Saturday.

On Sunday, a broken and angry Arsenal are away to Southampton, after losing their home invincibility to their arch nemesis, Manchester United, the gunners take their quest for a response to St. Mary’s stadium where Southampton would wish to hurt them further.

A win would steady the ship for either side in their respective ambitions but after sweeping Bate aside with a relatively second strings side, the gunners will look to show some grit against the Saints on Sunday, with Mesut Ozil and Alexandra Lacazette in the mood, the North London kings can wreak havoc at any time.

Later on, Liverpool will be the next to continue their dangerous form, the Kops have not lost a single game since being wiped out by City on a day Sadio Mane was handed an early bath. Merseyside derby is always one with loads of actions and counteractions, since the days of Michael Owen, Steven Gerard and Jamie Carragher, to the other side of Phil Neville, Leon Osman and Tim Cahill, names have changed but the atmosphere is as electrifying as ever.  Everton are on the rise, they have Big Sam now and they won away from home in Europa with their team B, three unreplied goals, that speaks volume, now, Firminho, Sadio Mane and Philippe Coutinho will face Wayne Rooney, Gylfi Siggurdsen and Ashley Williams... Light up Merseyside. As always, here we go with our predictions for the weekend games in the premier league...

Burnley vs Watford
Betting predictions: Burnley to win or draw

Huddersfield vs Brighton
Betting predictions: Huddlesfield to win or draw

Newcastle vs Leicester
Betting predictions: Newcastle to win or draw

Liverpool vs Everton
Betting predictions: Both teams to score