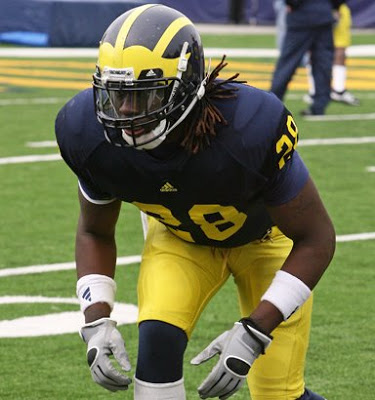 Please use the links here at TTB to make Amazon purchases (LINK):

Reigniting the look at past recruiting classes, here's a gander back toward 2008. Remember that 2008 was Michigan's transition class between Lloyd Carr and Rich Rodriguez. The roster had promising players at safety (Brandon Harrison, Stevie Brown, Michael Williams) but no real standouts.

How Do You Get Bed Bugs?
Teenage Bounty Hunters: an original, …
Crunchyroll – How to Watch Anime Onli…
After Getting Help for Myself, I Can …
Remote Learning Resources for the Fir…

It turned out that Michigan's best safety would come from the 2008 high School graduating class. But the great Jordan Kovacs would not join the team until 2009 as a walk-on.

Brandon Smith
High school: New Brunswick (NJ) New Brunswick
Ratings: 4-star, #17 S, #178 overall
College: Michigan
Scoop: Smith was a safety with a lot of hype who fizzled out at Michigan. He redshirted in 2008, made 14 tackles and blocked a punt in 2009, and was gone by 2010 after the staff realized he was too slow to play safety and moved him to linebacker. He then went on a meandering journey that took him to Temple, LA Pierce Junior College, and Rowan University, the latter two places using him at wide receiver and on defense.

Herman Davidson
High school: Long Beach (CA) Poly
Ratings: 3-star, #49 S, #545 overall
College: North Carolina
Scoop: Davidson redshirted as a freshman and then totaled 17 tackles playing linebacker in 2009 and 2010. It was announced that he would transfer after the 2010 season, but I cannot find any evidence that he played after that.

Karnell Hatcher
High school: Delray Beach (FL) Atlantic
Ratings: 4-star, #12 S, #167 overall
College: LSU
Scoop: Hatcher spent his first three seasons in Baton Rouge as a safety before playing linebacker in 2011. For his career, he made 133 tackles, 3.5 tackles for loss, 2 forced fumbles, and 4 pass breakups. He was not selected in the 2012 NFL Draft.

Will Hill
High school: Jersey City (NJ) St. Peter's Prep
Ratings: 5-star, #1 S, #5 overall
College: Florida
Scoop: Hill was a 5-star talent who had a lot of off-the-field issues throughout his career. In three seasons at Florida, he made 144 tackles, 4 sacks, and 4 interceptions. He entered the draft in 2011 but went undrafted due to character concerns. Altogether, he made 54 tackles, 1 sack, and 4 interceptions playing two years each for the Giants and Ravens before embarking on an AAF and XFL career.

Joseph Ibiloye
High school: Garland (TX) South
Ratings: 4-star, #19 OLB, #153 overall
College: Oklahoma
Scoop: Ibiloye was a backup safety as a freshman before transitioning to linebacker. He made 51 tackles, 2 tackles for loss, and 3 pass breakups throughout his career as a backup.

Charles Mitchell
High school: Clarksdale (MS) Clarksdale
Ratings: 4-star, #11 S, #133 overall
College: Mississippi State
Scoop: Mitchell was a backup safety as a freshman in 2008 before starting for his final three years. He made 283 tackles, 7.5 tackles for loss, 1 sack, 4 interceptions (1 for a touchdown), 1 forced fumble, and 5 pass breakups. That was good enough to get drafted in the 6th round (#192 overall) by the Atlanta Falcons in the 2012 NFL Draft. He made 2 tackles for the Falcons, got cut, and then spent part of 2014 on the Broncos practice squad.

Rahim Moore
High school: Los Angeles (CA) Dorsey
Ratings: 4-star, #8 S, #108 overall
College: UCLA
Scoop: Moore became an immediate starter for the Bruins and spent just three years in college before jumping to the NFL. As an amateur safety, he made 186 tackles, 6 tackles for loss, and 14 interceptions - including a whopping 10 in 2009 alone. He was picked in the 2nd round (#45 overall) by the Broncos in 2011. He also spent time with the Texans, Browns, and Giants before resurfacing in the AAF and XFL. Altogether, he made 207 tackles, 1 sack, and 9 interceptions during his NFL career.

Darrell Simmons
High school: Atlanta (GA) Baneker
Ratings: 3-star, #38 S, #475 overall
College: South Carolina
Scoop: I'm not sure what happened to Simmons. He signed with the Gamecocks, but I can't find any evidence that he actually showed up to play for them.

Jamoris Slaughter
High school: Tucker (GA) Tucker
Ratings: 4-star, #10 S, #115 overall
College: Notre Dame
Scoop: Slaughter redshirted in 2008 and then progressively became more involved, working his way up to part-time starter until he tore his Achilles in the third game of 2012. He made 98 tackles, 4 tackles for loss, 2 sacks, 2 interceptions, 1 forced fumble, and 6 pass breakups. He was drafted in the 6th round (#175 overall) by the Cleveland Browns in 2013, but he never advanced beyond the practice squad.

Devoe Torrence
High school: Massillon (OH) Washington
Ratings: 4-star, #1 ATH, #51 overall
College: Akron
Scoop: Torrence, whose older brother Devon played at Ohio State, got into some off-the-field trouble that appears to have ended his career prematurely. After redshirting in 2008, he rushed 30 times for 146 yards in seven games before his career fizzled.

Biggest miss: Rahim Moore (UCLA) is the obvious choice here. Making 14 interceptions in a career is tremendous for a safety, and he was the only guy picked above the 6th round in the NFL Draft.

Biggest bust: Devoe Torrence (Akron) was the #51 overall player and turned it into fewer than 150 rushing yards for his career at a MAC school.

Best in class: Rahim Moore (UCLA) was the highest safety drafted from the 2008 class, going #45 overall in 2011. His pro career wasn't anything spectacular, but 207 tackles and 9 interceptions is a pretty solid run.