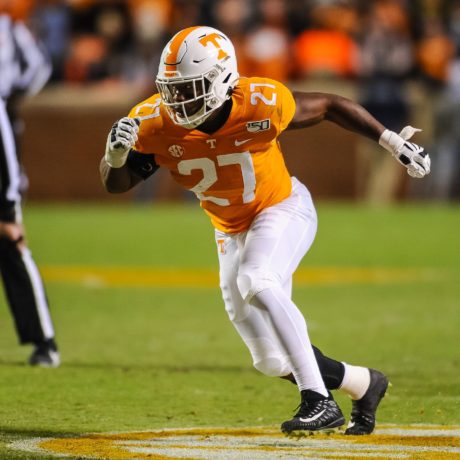 Quavaris Crouch - LB - Tennessee: Crouch was listed as a 6'2", 235 lb. linebacker for Tennessee in 2020 after coming in at 6'1", 246 lbs. (too heavy) as a freshman in 2019. As a second-year player, he made 57 tackles and 2 tackles for loss. His final three out of high school included Clemson and Michigan. Originally from North Carolina, the Wolverines and Tarheels are being considered. Crouch was a 4-star, the #3 athlete, and #61 overall in 2019. Here's a blast from the past, what I wrote about Crouch when he committed to the Vols (LINK):

Crouch somewhat inexplicably picked the Tennessee Volunteers. With a top three including Clemson, Michigan, and Tennessee, most people thought he would pick Clemson. Except he then supposedly eliminated them in the last week or two, taking a final-weekend visit to Tennessee. Michigan seemed to be running #3, but Tennessee . . . I mean . . . Tennessee?

Eric Gray - RB - Tennessee: Gray originally committed to Michigan before refusing to visit and then flipping to the Volunteers. This past season he was one of the few bright spots for the Vols, averaging 4.9 yards per carry and scoring 6 touchdowns (4 rushing, 2 receiving). I have not heard of any contact between Gray and Michigan this time around, and I would not expect to hear anything along those lines. But considering he's a former Michigan commit, I wanted to address it. He was a 4-star, the #3 all-purpose back, and #189 overall in 2019.

Jalen Green - CB - Texas: Green made 14 tackles, 1 tackle for loss, 1 interception, and 2 pass breakups in 2020. He was originally a 4-star, the #6 cornerback, and #47 overall in the 2018 class. It appears that Mississippi State might lead in the race for his destination. UPDATE: Green went ahead and committed to Mississippi State a couple hours after I posted this.