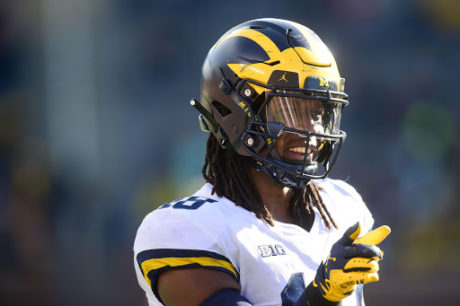 Defensive end Luiji Vilain, after four years in the program, has entered the transfer portal.

Sex on Your Period – Reasons to Do It
Monthly or quarterly dividend stocks?…
Batman vs The Predator I An fine exam…
Getting Help for Depression When You …
Don’t Forget to Brush Your Fur

Unfortunately, Vilain suffered multiple injuries early in his career, preventing him from playing in 2017 and 2018. He played in seven games in 2019 with 7 tackles, 1 sack, and 1 Forced Fumble. He followed that up by making 4 tackles in five games as a backup in 2020.

I think Vilain's injuries sapped him of some of his athleticism, and we never saw him hit his ceiling. His "sack" and "forced fumble" came against Notre Dame in a blowout rainstorm in 2019. Sadly, he never even flashed significant potential once he got on the field at Michigan. One of the main reasons I am not high on Shaun Nua is his inability to develop Vilain into even a decent player. Even when Vilain got on the field, his technique and reactions were subpar, reminding me of the Rich Rodriguez years.

Aidan Hutchinson and Taylor Upshaw should be the frontrunners to start at defensive end in 2021, though new defensive coordinator Mike Macdonald may throw out a different personnel grouping. Overall, this departure leaves Michigan very young and inexperienced going into next season, when a bunch of new faces will be forced into action.