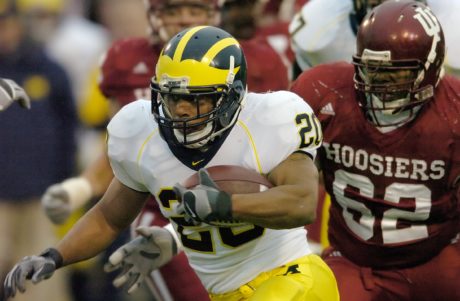 Please help to support the blog by making your Amazon purchases through the links here (LINK):

I would say "again," but I wasn't blogging about recruiting back in 2004 when Mike Hart committed to Michigan as a player.

Hart is joining Michigan's coaching staff as running backs coach after spending the past several years coaching at Eastern Michigan (2011-2013), Western Michigan (2014-2015), Syracuse (2016), and Indiana (2017-2020). That followed a college career with the Wolverines, when he finished as Michigan's leading career rusher, and a short career with the Indianapolis Colts. Hart happens to be the last Michigan running back to get drafted, an agonizingly long gap since 2008.

The hope is that Hart, a New York native, can be a recruiting boon for Michigan. He was very passionate about Michigan back in the day, even going as far as calling out then Stanford head coach Jim Harbaugh for Harbaugh's comments about Michigan's academics. (The two have since reportedly made amends.)

I am perhaps less enthused about Hart's hiring than many, for multiple reasons. First and foremost is the relatively pedestrian numbers Indiana running backs have posted during his time with the Hoosiers. The following numbers are for Indiana's top back during his time in Bloomington:

The backups have not been much better, if any.

I also have a hunch - perhaps a fear - that Hart prefers backs like himself: tough, reliable, and not very explosive. While he inherits elite recruits at Michigan (Zach Charbonnet, Blake Corum, Donovan Edwards) that he didn't have access to at Indiana, I hope he does not lean toward recruiting stockier, slower players we have seen over the years like De'Veon Smith, Derrick Green, etc.

There has been much discussion over the years here about running backs, but the reality is that elite teams have explosive running backs. Just check out the four CFP teams: Alabama (Najee Harris), Clemson (Travis Etienne), Notre Dame (Kyren Williams), and Ohio State (Trey Sermon). Michigan cannot compete with elite programs if it doesn't start uncovering - and playing - backs who can create big plays, preferably both in the running and passing game.

On the plus side, Hart has shown a propensity for advocating for one primary back. During most of his coaching years, one player has received the bulk of the carries, with the exceptions of 2015 at Western Michigan (Jamauri Bogan and Jarvion Frankling had 162 and 153 carries, respectively) and 2017 at Indiana (Morgan Ellison and Cole Gest had 143 and 93 carries, respectively).

Hart also has a history of winning. His high school team was 46-1 and won three state championships. He won a Super Bowl with the Colts. He helped turn a perennially mediocre/bad Indiana program into a tough out, and this past year, the Hoosiers beat Wisconsin, Michigan, and Penn State.

This move for Michigan probably solidifies the rumored move of Jay Harbaugh from running backs coach to special teams coach. Harbaugh actually got pretty good production from his backs, but special teams took a step back in 2020. Overall, I think he has done a good job of scheming up blocked punts, kickoff returns, etc. over the past few years since John Baxter left following the 2015 season, but the extra point/field goal units have struggled. Perhaps this move will free up Harbaugh to learn and focus on the place kickers, who combined to make just 3/9 field goals in 2020.

The defensive staff still has some filling out to occur, even with the (expected) hiring of Baltimore Ravens coach Mike Macdonald as defensive coordinator. At the very least, Michigan will need a new safeties coach to replace Bob Shoop and a new cornerbacks coach, with Mike Zordich reportedly being a free agent now.