I'm putting this piece together very quickly, so I apologize that it's not super in depth. I just don't have a whole lot of time.

I was inspired by a tweet from Stephen Osentoski, who does a good job of making football videos for YouTube/Twitter on Michigan football. I'm not trying to call him out here, but I wanted to clarify something based on a recent tweet from him:

Types of Kisses to Spice Up Your Sex …
Can I Spy on A Cell Phone Without Ins…
The Punisher: A Timeless Character
GNU: A Heuristic for Bad Cryptography
GetResponse Review-How to Setup

Sweep outside for Corum is lost because of a few things:

1. DT zooms upfield, forcing a bounce
2. Erick All loses on his block on the edge
3. Safety has enough time now to fly downfield#MnBFA pic.twitter.com/5Ij58ExmoG

I don't really agree with him that this is just a pure sweep to the left. This is "Inside Zone BASH." The B-A-S of "BASH" means "Back Away Sweep" or, essentially, putting the back to the opposite side to make him the outside run threat on an option run. 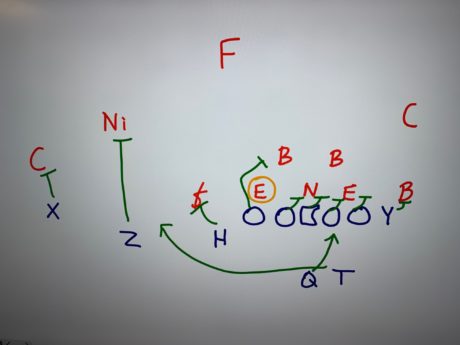 I've never seen Michigan's coaches talk about this play, but considering Josh Gattis's Penn State roots, I feel comfortable guessing that he uses some of the same coaching points/terminology as the PSU coaches I saw present on this in Winter 2019 at the Detroit Glazier clinic.

The QB should get his eyes on the defensive end (which Milton is slow to do here), and the tailback is taught to Circle The Field (CTF). Basically, if there's a handoff, running back Blake Corum wants to get to the sideline, just like we saw Saquon Barkley do really well for the Nittany Lions.

This is a great run concept, because it's basically two plays in one:

With the way the Wisconsin DE went upfield to chase Corum, I believe Milton should have kept the ball to run inside zone to the right. Unfortunately, center Andrew Vastardis gets tossed by Wisconsin's nose tackle, so maybe the play wouldn't have worked, anyway. But I do think Milton made the incorrect read.

It's important to note that you see left tackle Karsen Barnhart arc releasing outside the DE in order to make that DE widen, opening up inside zone for the QB. Barnhart is trying to get to the linebacker, but taking the long way to mess with the DE.