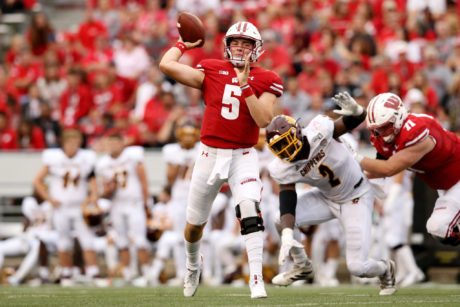 Graham Mertz (image via The Spun)

As I write this on Wednesday/Thursday, there's not much known about which Wisconsin players will be available to play on Saturday, including starting QB Graham Mertz, which is kind of a big deal. This preview assumes they're at full strength.

8 Ways To Turn Your Home Into Cash
Interview with the legendary comic bo…
Fields End Water caravan park
A new month, a new outlook – Parts 1 …
Water Birth? Is it Safe? Is it less P…

RUSH OFFENSE vs. WISCONSIN RUSH DEFENSE
Michigan is #84 in rush offense (140.3 yards/game) and #31 in rushing average (5.1 yards/carry). That second number is a bit of a lie, because the Wolverines ran all over Minnesota in week one and have struggled mightily in the past two games. The "bell cow" so far this season is Hassan Haskins, who is averaging a whopping 6.67 carries per game. I have confidence that the offensive line will improve as the season goes along, because offensive line coach Ed Warinner has pulled off that feat before. But Michigan was missing its starting offensive tackles last week, and it's unclear whether they'll be back for Wisconsin or not. Meanwhile, Wisconsin allowed 131 yards in its lone game against Illinois this season on 5.24 yards/attempt. Those numbers aren't good for the Badgers, but they were hurt by a couple quarterback keepers (by former Wolverine Brandon Peters) that Michigan has seemingly been unwilling to run. Wisconsin runs a 3-4 look that generally does a good job of swarming to the football. Junior linebacker Jack Sanborn (6'2", 232 lbs.) is probably the biggest name on defense, and he made 3 tackles and 2 quarterback hurries in the opener. I was also impressed by senior defensive end Isaiahh Loudermilk (6'7", 293) in that game against the Illini.
Advantage: Wisconsin

PASS OFFENSE vs. WISCONSIN PASS DEFENSE
Michigan is tied (coincidentally, with Michigan State) at #27 for passing yards per game with 289.7. The Wolverines are #67 in passing efficiency, mostly at the hands of Joe Milton (60.7% completions, 869 yards, 4 TD, 2 INT). Milton was more patient in the pocket against Indiana than he was against Minnesota or MSU, so there have been some improvements there. But overthrows have been a huge problem, as numerous downfield throws haven't even been close. Ronnie Bell leads the team with 14 catches for 269 yards (19.2 yards/catch), and other players are starting to emerge, including Michigan's only "big" receiver, Cornelius Johnson, who had a 37-yard touchdown catch last week. The Wolverines are giving up 1.67 sacks/game, which is tied for #39. The Badgers had 3 sacks in their only game so far, 1 each by Loudermilk, LB C.J. Goetz, and LB Nick Herbig. They allowed just 87 yards through the air (technically, #1 in the country) and they're #2 in passing efficiency defense. I watched that game, and it's not so much that they destroyed Illinois' passing game, but there were throws that were off the mark and . . . well, the Illini's #1 target, Josh Imatorbhebhe, had several drops. Current senior safety Josh Burrell (6'0", 195) led the team with 3 interceptions last season, and junior cornerback Rachad Wildgoose (5'11", 197) is the top cover guy. I hope I'm wrong, but I think Wisconsin's coverage is going to befuddle Milton into have a poor game.
Advantage: Wisconsin

RUSH DEFENSE vs. WISCONSIN RUSH OFFENSE
Michigan is #31 in rush defense (124.3 yards allowed/game) and #17 in yards allowed per carry (3.19). This is actually quite surprising that they have been that good on average, because tackles for loss have been few and far between (tied for #97 nationally per game). They have done a good job of preventing big plays in the run game, which is probably the biggest reason for those relatively good rankings. The bad news is that Michigan's best run defender, end Aidan Hutchinson, is likely out for the season with a lower body injury. Hutchinson could play end and bump inside to tackle, and his backups are not nearly as effective. *gulp* Safety Brad Hawkins leads the team in tackles (27), followed by Viper Michael Barrett (23) and weakside linebacker Josh Ross (22). On the plus side, Wisconsin is #46 in rushing (182 yards) and #103 in yards per carry (3.37). They have long had a great running game behind excellent offensive lines and solidly talented running backs, but I think the Badgers may have hit a speed bump in running talent this season. Illinois is not a good team (325 rushing yards and 5 touchdowns surrendered to Minnesota last week), yet Wisconsin sophomore running back Nakia Watson (5'11", 229) averaged 3.26 yards/carry on 19 attempts and the guy thought to be the 3rd down specialist, Garrett Groshek (5'11", 220), led the team with 70 yards on 13 carries (5.38 yards/carry). The offensive line is predictably large (average: 6'5", 317) and veteran, with two fifth year seniors and three redshirt juniors up front. I don't expect any 70+ yard runs like what Jonathan Taylor and Melvin Gordon could do, but they will probably break off some chunk runs like Mohamed Ibrahim did for Minnesota.
Advantage: Wisconsin

PASS DEFENSE vs. WISCONSIN PASS OFFENSE
Michigan is in a weird place at #103 nationally (287.3 yards allowed/game) and #70 in passing efficiency defense. We're not used to seeing the Wolverines struggle this much against the pass. I hate to pile on cornerback Vincent Gray any more than I already have, but for everyone's sake - including Gray's - I hope defensive coordinator Don Brown starts someone else at corner this week. It compounds the defensive back issue that Michigan can't get to the quarterback (0 sacks since game one), though Kwity Paye has 25 quarterback pressures through three games. Paye did leave last week's game with what looked like a lower body injury, so we have to pray he's healthy enough to play. Wisconsin quarterback Graham Mertz (6'3", 215) made his first start against the Illini, and it was a rousing success: 20/21, 248 yards, 5 TD. Then he tested positive for COVID, and it's unclear if he will play on Saturday. It's possible the starter could be Danny Vanden Boom (6'5", 207), a redshirt junior whose only game action came during the 2018 season against New Mexico, Illinois, and Rutgers, when he was 1/1 for 3 yards. Junior tight end Jake Ferguson (6'5", 246) leads the team in receptions (7) and touchdowns (3). The Badgers' receivers aren't anything special, but we thought the same thing about MSU's Ricky White before he went for 196 yards. Mertz is the real deal, and I don't think rust will be much of an issue if he plays. If Vanden Boom (who was expected to be the #4 guy this year) is The Guy, Michigan might have a chance. I went back and watched his senior Hudl film (LINK), and he's an average athlete who's very mechanical.
Advantage: Wisconsin