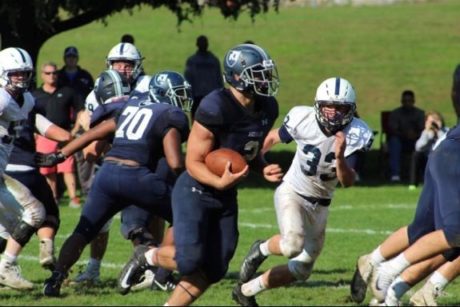 Casey Phinney (image via 247 Sports)
Dedham (MA) Noble & Greenough linebacker Casey Phinney committed to Michigan on Friday morning. He picked the Wolverines over offers from Army and UMass, plus some Ivy League schools.

Hit the jump for more on Phinney's commitment.

Phinney was offered by Michigan back in May of 2018, almost two years ago. That means he was offered a scholarship after his freshman season. He was one of those guys that you maybe expected to continue and grow, and he's still listed at the same height and weight he was when I first wrote about him. He decided to pull the trigger publicly this morning.

Phinney is a thickly built inside linebacker. He looks like a traditional fullback/inside linebacker combo. He appears to do a good job of communicating and looks like the shot-caller on the defense. In fact, one of his best assets is his ability to quickly diagnose plays and attack. He can stack and shed blockers releasing to the second level, and he does a good job of running his feet through contact.

On the negative side . . . look . . . I'm going to say something similar to what I said about Louis Hansen yesterday. I don't see Phinney moving Michigan's defense forward. He is a tough, hard-nosed, physical linebacker playing in a finesse and speed world. Is he going to cover wheel routes matched up against the Saquon Barkleys and TreVeyon Hendersons of the world? Absolutely not. (I understand those are tough covers, and linebackers can't cover those guys, but that's just a giant mismatch.) I could see the Phinney commitment making more sense for a team running a 3-4, but Michigan's 4-3/4-2-5 doesn't seem like a great fit for his skills.

In what's expected to be a small-ish class, I believe Michigan could hold out for a more athletic addition to the linebacker corps. The Wolverines have gone toward smaller, faster linebackers in recent years (Devin Bush, Cam McGrone, etc.). For a Michigan comparison, Phinney looks a whole lot to me like Desmond Morgan. Morgan was a fine linebacker, but . . .

Michigan now has six commits in the 2021 class, including three in the past two days (joining Hansen and punter Tommy Doman). Phinney should be physically ready to play, and he's a smart player, so I expect the mental adjustment to come quickly, too.

Michigan has recruited Noble & Greenough a fair amount in recent years. They offered tight end Cam Large (Wisconsin) in the 2020 class, and they also have an offer out to offensive guard/defensive lineman Drew Kendall in 2021.

TTB Rating: I'm not posting TTB Ratings until I wrap up the 2020 class.