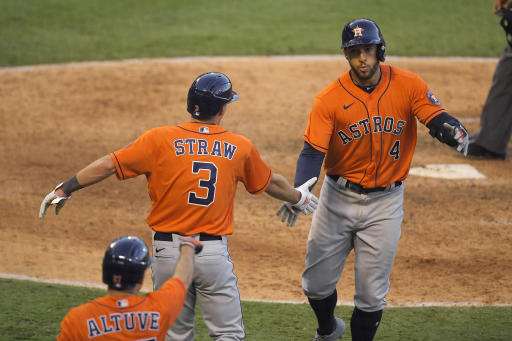 Josh Reddick hit a solo shot earlier in the ninth, and backup catcher Garrett Stubbs singled to keep the game alive against Hansel Robles , who had the latest in the Angels' series of miserable relief performances.

Cy Sneed was rushed in from the bullpen, and former Astros catcher Castro drove the tying double off the top of the wall in deepest center field.

Greinke retired the Angels' first 16 hitters in a bid for the first perfect game of his 17-year major league career, but didn't get out of the sixth inning.

Canning pitched six-hit ball into the seventh inning and struck out five in a similarly strong start for the Angels, whose rotation has outpitched their bullpen.

Shohei Ohtani returns to the mound after a disastrous season debut last Sunday in which the Angels' two-way star couldn't record an out in Oakland.