Top Seed to the Niners … by Inches 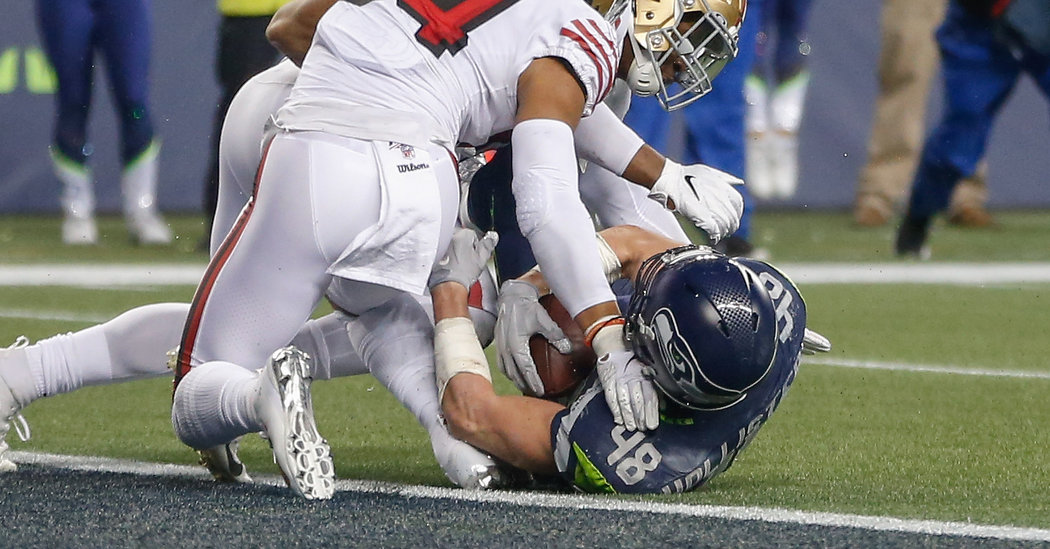 Seattle — In the stadium where they hadn’t won in eight seasons, where their Super Bowl dream once perished, where they have been derided and dominated and disregarded for so long, the San Francisco 49ers gazed at the video screen and waited to learn whether they would be feeling like that again.

Already they had bolted their sideline in celebration, thinking, trusting, that they had denied Seattle the winning touchdown, but now — at the end of a confounding sequence late in a fourth quarter that unfolded as if jolted by caffeine, a triple shot of mayhem — the Seahawks were extending their arms above their heads.

At the end of a long replay review, the CenturyLink Field scoreboard flashed San Francisco 26, Seattle 21, but anyone and everyone knew that the actual margin of victory on Sunday night was not five points but more like five inches — and, really, fewer than that.

In a vicious conference where San Francisco was one of three teams to win 13 games, the rookie linebacker Dre Greenlaw ensured that the 49ers would secure the top seed by listening to his position coach: By scanning Russell Wilson’s eyes to anticipate a fourth-down slant, and by planting his feet just inside the goal line as Wilson threw toward Jacob Hollister, Greenlaw positioned himself to deliver a tackle that will resonate from Mill Valley to Milpitas, and beyond.

Regardless of how much he had been training, building endurance and simulating contact, it was unreasonable to expect him to emerge as Seattle’s lead back after having not played in nearly 15 months: Just two weeks ago, he was dispensing tequila shots in the parking lots outside the Raiders’ stadium in Oakland, Calif., his hometown, before their final home game there.

Coach Kyle Shanahan often tells players after absurd victories that he didn’t think they would win, and in this joyful season, unlike any they have experienced across the last six years, the San Francisco 49ers have triumphed in the slop at Washington, amid earsplitting cacophony in New Orleans and the din of Seattle.

Top Seed to the Niners … by Inches